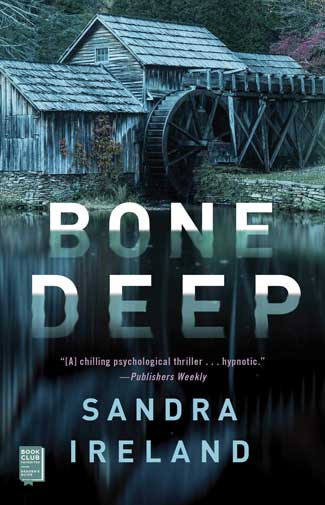 A twisty and propulsive read, Bone Deep by Sandra Ireland is a dark psychological thriller of sibling rivalry, love, betrayal, and the dire consequences of family fallout that brilliantly plays on our fears of loneliness and abandonment.

When Mac, a retired professor, hires Lucie to type up her work-in-progress and serve as general “Girl Friday,” she does so reluctantly. Mac enjoys her privacy. She leads a simple life in a small, myth-soaked hamlet near a legendary mill. It is her environment, in fact, that inspires her current work: a collection of local stories.

But myth starts to blend with reality when Mac discovers there is far more to Lucie than meets the eye. Lucie is running from some dark secrets that, as Mac slowly discovers the hidden pieces, are strangely parallel to a story Mac is recreating in her collection—and remind Mac of some unpleasant pieces of her own past.

As these two women’s lives become intertwined, their stories becoming inexorably linked with the history of the mill and the magical land surrounding them. Bone Deep by Sandra Ireland is a beautifully depicted tale that feels like a contemporary fairy tale itself. Romance, intrigue, family struggles, and dark secrets all weave together through chapters alternating between Mac and Lucie’s point of view.

Once upon a time, there were two sisters. One betrayed the other and was forever haunted by her deed—or so the legend goes in “The Cruel Sister,” a story that Mac is retelling in her new academic collection.

But life isn’t a story, right? At least that’s what Lucie tells herself, despite the strange parallels to her own life. As she types in Mac’s more-and-more haphazardly handwritten sheets, she finds herself relating a little too much to the tale.

We lock eyes on the doorstep, not speaking. We’ve always been the kind of couple that breathes in sync, and we’re doing it now—bodies readjusting, realigning to accommodate each other. I take a step back, bare heels colliding with a wicker basket, not noticing the pain. Reuben is gazing at me from under his wayward bangs, face full of questions. I should tell him to go. I can’t see you anymore. This isn’t right.

I say his name, and it feels so good to say it out loud. He smiles and I’m lost.

However, Lucie isn’t the only one feeling the sting of the sisters’ fictional tale.

Margarita Muir, known far and wide as “Mac,” has some secrets of her own. Her whole life has been focused on her studies, her writings. It was with a sense of reluctance that she moved to this small hamlet years ago to be the wife of the local miller. Now that her husband has died, she finds herself wandering the shores of the pond, eating her grown son’s baking, and walking in the same paths as local ghosts.

Now that Lucie is around, however, the past, which seemed at such a safe distance, is not as far away as she’d assumed. Lucie reminds her of an old friend—and Mac is having a harder and harder time differentiating the two of them. And she’s having a hard time separating Lucie from the sisters in “The Cruel Sister.” She refuses to believe that it’s her mind that’s slipping, though. Her brain has been her bread and butter for 70 years; there’s no way it would give out on her now.

I hear the car door slam and a lot of bad-tempered jangling of keys at the lock. Oh dear. I sit back and wait for the darkness to enter.

“You were making no sense on the phone whatsoever, Ma.”

“I merely called to tell you Lucie had a visitor.”

“You didn’t have to come. I don’t know what you’re talking about.”

We are nose to nose in the study. Arthur still twitching his keys, as if he’s in a hurry to get away. There’s a smell of petrol and night air about him. But what’s all this? He’s repeating things I don’t remember saying and my heart is juddering like an old locomotive. I feel taken aback. Surely, I said nothing of the sort?

This atmospheric, fairy tale of a novel moves gracefully from one character’s point of view to another, hiding and revealing pieces of itself as it goes. Bone Deep by Sandra Ireland will keep you engaged from beginning to end. Mac explains it best, “There isn’t much more to tell, but what’s left is the shocking part. It’s the bit that changes what you think you know.”