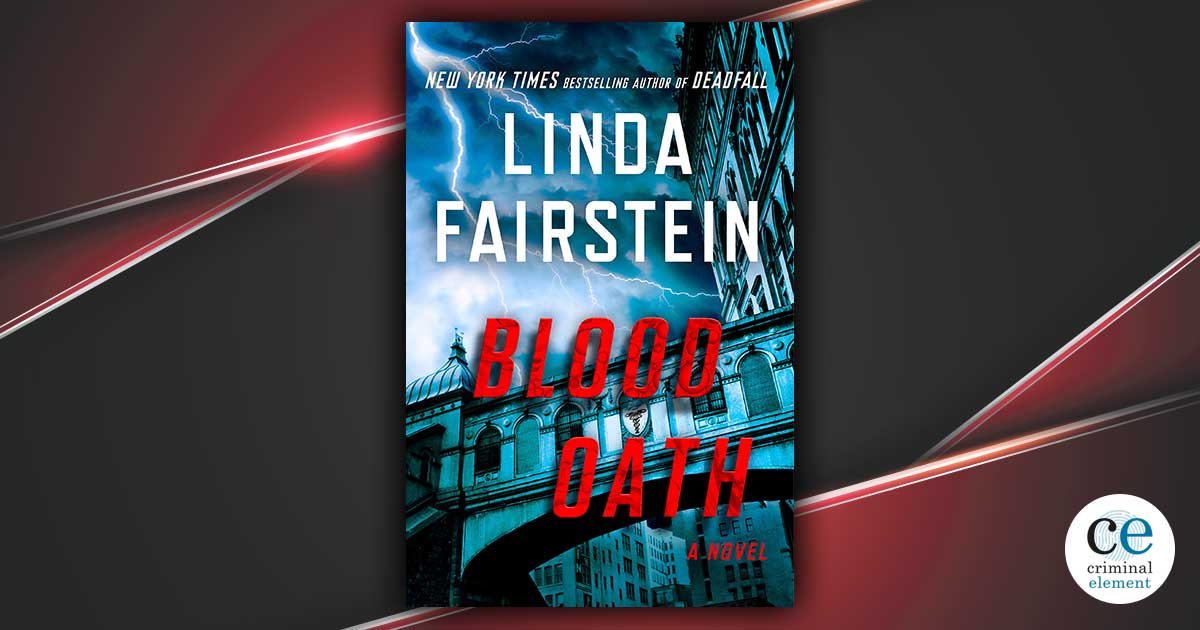 Blood Oath by New York Times-bestselling author Linda Fairstein is the 20th installment in the Alexandra Cooper series, which explores the depths of Manhattan’s secretive Rockefeller University in a timely, captivating thriller about the deep—and often deadly—reverberations of past sins.

Alexandra Cooper is a Manhattan Assistant District Attorney for the Sex Crimes Unit. After a hiatus due to being kidnapped and witnessing her boss’s death, Cooper returns to her job only to find herself wrapped up in a complex case. Add in that the person of interest is one of Cooper’s highly esteemed colleagues and you’ve got a mess. While she’s researching this, another prosecutor falls victim to a strange and deadly circumstance, which only embroils Cooper that much deeper. Can she save herself before she becomes the next target?

I haven’t read any of the prior books in the series, but I didn’t find it difficult to jump in at this point. I’m sure I could have benefitted from having watched the characters evolve over time, but it wasn’t detrimental to my enjoyment of this story.

When Blood Oath starts, Cooper has been on a break and is just coming back when she meets a young woman with a shocking story. Lucy Jenner is a 24-year-old that has been picked up on an old warrant. She ends up in Cooper’s office because she was a witness to a murder 10 years ago. That case turned into a national story when it was revealed the murderer was a white supremacist serial killer. Her testimony was crucial to winning the case. But this wasn’t why Cooper was involved. Lucy had been sexually assaulted and raped by someone she trusted—the only person left in her unfortunate life who she thought truly cared for her.

“Yeah. Exactly. The man who raped me. He didn’t just hurt me, he raped me.”

I had been waiting for Lucy to use that word. Rape. She hadn’t said it earlier in the day, and though it seemed to me to be the issue, she needed to speak it out loud and not have me guess at it.

“We put rapists in prison, Lucy. That’s what Mercer and I do.”

She had shredded the tissue in her hand, so I gave her two more.

“The reason I’ve never been able to tell anyone is that the man—my rapist,” Lucy said, catching her breath, “my rapist threatened that if I ever said anything about what happened, he’d personally make sure he’d find a way to break my spirit. To break me completely—whatever was left of me.”

I tightened my lips and tried to find the right approach to reach her. “Whoever he is, Lucy, he can’t be that powerful. Nobody is. You’ve got strength and courage you’re not even aware you have.”

Lucy pushed her chair back and got to her feet. She was defiant now. “He is powerful, Ms. Cooper. And beyond that, he made me swear not to tell.”

“He obviously made you do a lot of things you didn’t want to do,” I said. “You were a kid, Lucy. Don’t be afraid now of things that scared you then. Swearing to a rapist that you’d protect his secret is not a pledge you have to keep. Bring him to justice and I promise you that not even he can break your spirit.”

“It was more than a pledge I made to him,” Lucy said, hesitating for several seconds. “It was an oath. He said it was every bit as sacred as a religious rite—a promise to God.”

This time when she offered her hand to me, she opened her fist and showed me her palm. There was a scar across it, from the base of her index finger to the opposite corner where the palm joined with the top of her wrist.

“He mixed our blood together and made me swear never to tell,” Lucy said, rubbing her palm.

“I don’t know what will happen to me if I break that pledge,” she said, pausing again. “It was a blood oath.”

While Lucy’s case is being developed, another prosecutor and dear friend to Cooper, Francie Fain, mysteriously collapses and is in a coma. It’s soon revealed that Francie was poisoned, and not only that, she was also pregnant.

“Kiss of death is the English translation of the Russian poison used against Francie—the latest in a long line of deadly chemical weapons.”

“A nerve agent, developed by the Russians,” Vickee said. “An extremely powerful nerve agent. At four o’clock today I’d never heard of it, and now I’m practically an expert.”

“Remember your history? Tokyo subways in 1995? Someone released an odorless gas called sarin which killed a dozen people.”

“Sarin’s a nerve agent,” Mike said. “You breathe it in or it makes contact with your skin and you’re dead in minutes. It’s a weapon of mass destruction, which was supposedly stockpiled in Iraq in the 90’s, and then outlawed by international panels of weapons inspectors.”

“But Francie had nothing to do with—“ I tried to say something but Mike was rolling over me.

“Fast forward to 2017, when Kim Yung Il’s brother was assassinated in the airport in Kuala Lumpur,” Mike said, “by two women who smeared a nerve agent on his face. I think that one was called VX.”

“You’re talking military stockpiles and foreign dictators,” I said. “This has nothing to do with Francie.”

Fairstein’s writing style and ease of character development have won me over despite this being my first dip into the series. By the 20th installment, there’s no doubt that these characters are fully fleshed out and she knows them well. However, as a new reader, I didn’t feel like a stranger. It was fine for me to jump in this far ahead. Also, Fairstein’s knowledge of the subject comes from her previous title of chief of the Sex Crimes Unit of the district attorney’s office in Manhattan. I highly recommend this series and will be checking the other books out soon.