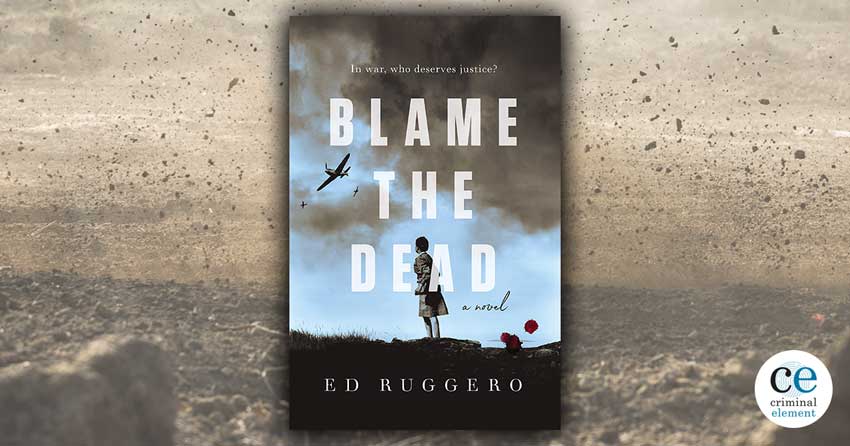 Blame the Dead by former Army officer Ed Ruggero is the thrilling start to an action-packed and timely World War II series, where an inexperienced police officer and talented field nurse investigate a murder in wartime Italy.

1943. Army Lieutenant Eddie Harkins has arrived in Sicily. After being on duty for 24 hours, he and his sick driver arrive at a field hospital—and the scene of a murder. Dr. Myers Stephenson, a surgeon, has been shot in the head. Harkins, a beat cop from Philadelphia, finds himself suddenly in charge of the investigation. Now, Harkins is faced with hunting down a murderer in the middle of a war despite the fact he has very little criminal investigation experience.

With the help of an old friend, Katherine Donnelly, who now serves as a nurse in the same field hospital, Harkins begins his search for someone who may want Stephenson dead. However, it comes to light within the first couple of interviews that this mystery might only be figured out by identifying who doesn’t want Stephenson dead, as the deceased surgeon crossed several lines.

Blame the Dead by Ed Ruggero carries the reader to a complicated time and place. Not only do the characters have to contend with war and all the struggles that infiltrate day-to-day life—sleeping in tents, taking baths with buckets—but the roles people play are shifting quickly. Here, women are serving near the front lines as nurses. Men who perform one duty in civilian life are being asked to perform different jobs far from home.

Harkins is a prime example of being tasked with new duties. Since the war has put such stressors on supply chains and has limited soldiers with expertise, Harkins is put in charge of this murder. While he was a police officer in Philadelphia and has seen some things, he’s never led a homicide investigation.

“I’m going to start the paperwork saying there’s been a murder here,” Adams said. “How are you going to proceed?”

“I’m proceeding to my bivouac,” Harkins said. “I’m not an investigator. That’s your job.”

“Neither am I. I was a beat cop. You need somebody popped in the head with a nightstick, I’m your guy. But this is serious stuff. Aren’t there any detectives or former detectives with the provost marshal?”

“We’re stretched thin,” Adams said. “This one belongs to you and me.”

So he pursues his assignment using the key skillsets he has: his ability to question and his own hands-on experience. But navigating the world of nurses and ranking officers is a minefield in and of itself. The nurses don’t trust him, and the ranking officers find him a nuisance. It’s only with the help of childhood-friend-turned-field-nurse Katherine Donnelly that he manages to gain any clout with the nursing staff.

When he begins asking questions about Stephenson, he meets nurses in the field hospital who curse, flirt, and argue just like men. They immediately put him on notice. But the more he presses the issue, the more it becomes clear that several women have the same motive to take Dr. Stephenson out: inappropriate sexual advances. In a world where women are just able to hold an occupation, there is no recourse established for this behavior.

Even when Harkins encourages Stephenson’s primary victim, Nurse Ronan, to bring the deceased doctor’s behavior to the attention of Colonel Boone, she is not taken seriously. But by the end of the conversation, Harkins has a whole new suspect.

“Oh, I’m sorry,” Boone said. “I was under the impression that you and Captain Stephenson had a relationship. Were lovers, in fact.”

“Hmmm,” Boone said, putting a finger to his lips. Smug. “That’s not what he led me to believe.”

Harkins tried redirecting the conversation. “A number of the nurses told me that Stephenson forced himself on them. Tried to take advantage of them.”

She paused, and Boone asked, “And what?”

“And you let it go on. You take their side any time one of the nurses complains.

“Well, perhaps that’s the way you see it. But there’s more to the story, and I have a different point of view. I’m responsible for running an entire hospital, you see. If I spent my time worrying about every little lovers’ spat, we’d get no work done around here.”

“We weren’t lovers,” Ronan said, her voice cracking a bit.

“Stephenson said you’d never do anything to him,” Ronan said. “Like he had something on you.”

With Blame the Dead Ed Ruggero has established an unusual pair of central detectives—an inexperienced investigator and a whip-smart nurse—caught in wartime. The politics of military rank and the reality of the violent theatre they find themselves in should lend many twists and turns for future titles in this series. It’ll also be interesting to see how Harkins’s past, filled with mistakes and strange turns, informs his future.