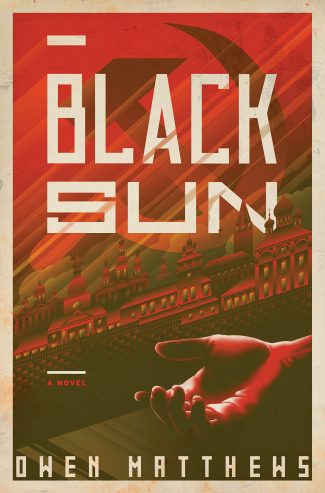 In Black Sun by Owen Matthews it is the dawn of the 1960s, and KGB officer Major Alexander Vasin must investigate the gruesome death of a brilliant young physicist at a top-secret research city where a cutthroat brain trust is developing a nuclear weapon with 3,800 times the destructive potential of the Hiroshima bomb.

Alexander Vasin, a KGB major and protagonist of Owen Matthews’ debut novel, Black Sun, is a believer. It’s 1961, and Khrushchev has pledged a new era of Soviet innovation, a steady march away from the paranoia and purges of the Stalin era. Vasin, a former Moscow cop now part of the KGB’s clandestine Special Cases unit, believes that, in this new world, after years of denunciations, assassinations, and erasures, justice, finally, can be done.

But then Vasin arrives in Arzamas-16. A city that doesn’t officially exist, Arzamas-16 is home to the Soviet Union’s nuclear weapons program. There, Khrushchev’s demand for innovation is reaching its terrifying, logical conclusion, as Russia’s brightest minds work day and night on RDS-220, a hydrogen bomb that could be hundreds of times more destructive than the bombs dropped on Hiroshima and Nagasaki.

When one of those bright minds dies under suspicious circumstances, Vasin’s boss sends the young major to investigate. There are state secrets to protect and villains to ferret out, although, as Vasin soon discovers, Arzamas-16 has its own rules—and its residents their own appetites and fears.

Black Sun is an impressive debut and it’s not a stretch to say that Matthews’ whole life led him to this book. His memoir, Stalin’s Children, recounts his family’s history in Russia, from his grandparents’ deaths as a result of Stalin’s purges to his mother’s journey out of the country and eventual marriage to his father, a British embassy employee during the Cold War. In the mid-1990s, Matthews was a reporter for The Moscow Times; a decade later, he was Newsweek’s Moscow bureau chief. Matthews knows the landscape and the people, and his recreation of Cold War-era Russia and the inner workings of Soviet government and society are so good they seem effortless. The book is deeply researched and filled with small details and brief scenes that give the setting a cold, clear life.

The characters are also sharply drawn. A thriller like this lives or dies by its protagonist and Vasin is a breath of fresh air. He’s conflicted and complicated, desperate to believe that he can pursue justice by working within the system, despite decades of evidence to the contrary. Vasin is shrewd, but not a genius, and Matthews isn’t afraid to let Vasin fail at his mission or remain naïve. That he’s stuck in Arzamas, where all the Soviet-era rules are tossed out to accommodate the intellectual (and physical) desires of the scientists working on RDS-220, creates great narrative tension. Vasin wants the truth, even in a city constructed on lies. As Vasin’s guide in Arzamas tells him:

“I’ve lived among these people for three years now. And let me tell you, pretty much every one of them is a social deviant in one way or another. Allow Zaitsev to run amok in the Citadel, and he’d have confessions of anti-Soviet activity out of half the staff before you can say ‘purge.’”

“The [KGB] doesn’t do purges anymore.”

“And where did you read that, friend? Does the fact that something is on the front page of Pravda make it true? You’re so sure that times have changed?”

“You told me yourself that the work they do is so valuable they can do whatever they like. They’re untouchable.”

“As long as they succeed. What happens when they fail?”

Matthews’ characters are as real as the setting. They’re scientists, wives, bureaucrats, ex-priests and former prisoners, reluctant state officers—but most of all, they’re survivors, and Matthews’s characters are adept at articulating how and why they chose to survive in ways both subtle and explicit. In a lesser book, Maria Adamova, the young wife of the scientist in charge of creating RDS-220, would be a love interest for Vasin or femme fatale. But in Black Sun, Maria is stubbornly, sometimes frighteningly, her own person; after surviving the siege of Leningrad in World War II and years in a prison camp, she is alive through sheer force of will alone, and her conflicting, often contradictory motivations help make the book’s central mystery unique. That Matthews based Maria’s life in part on his mother’s own experiences adds another layer of realism and complexity.

As that central mystery unfolds, Black Sun’s pacing stumbles. Matthews structures the book around the week leading up to the final test of RDS-220, a timeline that initially gives Vasin, and the reader, a sense of urgency until it suddenly doesn’t seem to matter. While Vasin is thinly-sketched for the book’s first half, he comes into greater focus, and though Matthews ultimately succeeds in creating a fully-realized protagonist, the narrative suffers. Other plot developments drag down the momentum later, but Matthews manages to pull together a conclusion that’s satisfying and surprising because of all that great character work.

Black Sun is at its best when Vasin struggles with himself. So committed to the system and with such faith in his cause, he realizes only too late that the poison lies at the heart of the social order he so strongly believes in. As he learns about the destructive power of RDS-220 and hears the moral justifications for its existence, Vasin is horrified. But he comes to learn that the state security apparatus wields just as much awful potential, if not more.

So much poison, dug into the ground. So much betrayal and viciousness trapped in those lifeless pages. All those dead their cries for justice composted into poison that could seep out like marsh gas. Even a tiny waft of it, released into the outside air, could kill.

In real life, Arzamas-16 was home to the Soviet Union’s nuclear weapons program and RDS-220 was developed there, though Matthews has fictionalized many of the details behind its development.  Ironically, long before it was a temple to science, Arzamas-16 (now known as Sarov) was a holy city, home to St. Seraphim, one of the Eastern Orthodox Church’s most renowned saints. For Vasin, that clash between belief and knowledge, and the realization that both can drive people to extremes, proves dangerous. For readers who like their thrillers firmly grounded in history and populated with unpredictable characters, though, it’s a delight.