March 26, 2021
In the second installment of the Underwater Investigation Unit series, a cold case draws police diver Sloan McPherson into the dark world of a twisted serial killer. 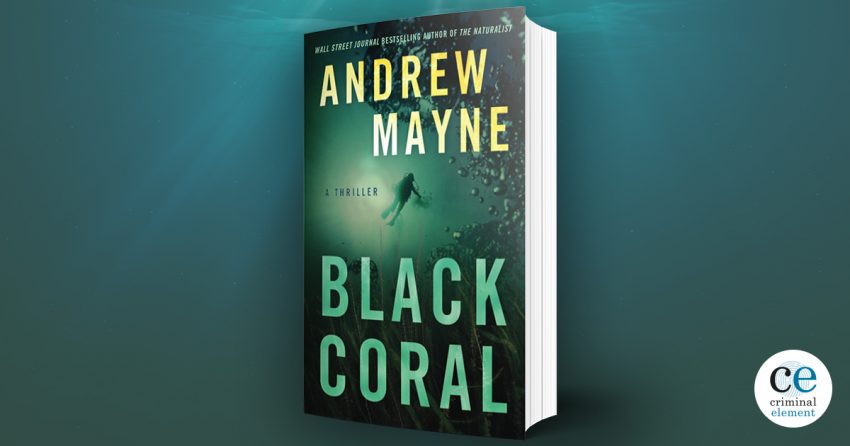 Former illusionist and now bestselling author Andrew Mayne used to have a cable series entitled “Don’t Trust Andrew Mayne”. If you take that same recommendation and apply it to his writing you will have some idea of the games you are in for with his latest novel titled Black Coral. Just when you think you might have things figured out, Andrew Mayne pulls the rug out from under you and leaves you reeling in fits of delight.

This is the second novel in the Underwater Investigation Unit series featuring Florida Police Diver Sloan McPherson. The first novel in the series, The Girl Beneath the Sea, introduced us to one of the most unique entries in the crime thriller genre. I am pleased to say that Black Coral simply blew me away and showed that McPherson and her team are more than just underwater investigators—they are great cops, period.

The novel begins with what appears to be a terrible, fatal accident. A vehicle runs off a highway in South Florida, through a guardrail, and into a small waterway known simply as Pond 65. The police and Fish and Wildlife control are present as the Underwater Investigation Unit (UIU) arrive to dive into the pond and recover the body of the one person that did not make it out alive from the vehicle. Fish and Wildlife are there to try and wrangle the alligators in the pond so that Sloan McPherson can dive unhindered. The F & W agent does make her aware that this pond is a frequent haunt of Big Bill, a giant gator that is infamous to the surrounding area.

As Sloan is bagging the body in the sunken vehicle while avoiding a very curious Big Bill, she discovers something else under the water. There was another vehicle buried there, a van that appears to have been there for a long while. When she goes back under to investigate, she finds the skeletal remains of four bodies. Further investigation shows that this vehicle had been reported missing thirty years prior when four teens—two boys and two girls—failed to return from a rock concert. While the team is awaiting further confirmation of this find, Sloan asks her boss, George Solar, if she can further investigate this cold case to give closure to the families of the teens that were found.

After some political head-butting, the UIU is assigned the task of looking into this. However, Solar is keeping Sloan on a short leash as he needs her and her colleague Hughes to concentrate on their active case involving some river bandits. The location of the rock concert the teens were attending was at the long-defunct Black Coral Amphitheater. Pond 65 was well off the beaten track from that venue so there must have been some reason why they were driving there. Forensic evidence shows some signs that the males may have been beaten and the females, whose panties were on inside out, showed signs of sexual assault. Could someone have kidnapped, tortured, and abused the four teens before dumping the evidence in Pond 65?

This is more than enough for Sloan and the UIU to look up other missing persons around the area during that time frame and beyond. Sloan creates a map of Florida detailing all the missing person cases and it is significant. Clues will send them into the area trailer parks that are inhabited by sexual predators and ex-cons as it appears the killer may be part of that sick community. The one name that keeps popping up is that of someone nicknamed Sleazy Steve and he quickly becomes the number one suspect on their list.

They decide to investigate alligator dens where they often keep remains and other things for several years. With an over-eager tour guide, Sloan and Hughes take a trip through the Everglades digging for evidence. They find so much more than they bargained for. At least three cages filled with bones are found and later accumulate to thirty different bodies. They now officially are on the hunt for a serial killer that may still be operating in South Florida. A statewide task force is put in place with UIU on the outside looking in. Sloan is persistently stubborn and will not stop searching her leads for the existence of Sleazy Steve.

When the task force announces that they have caught the killer it turns out to be one of the perverts that UIU previously interviewed. Sloan knows in her heart he could not be the killer and decides to investigate it alone in the hopes that the real killer is still out there. The UIU team of three is without back-up as they attempt to lure in a vicious serial killer who has remained uncaught for decades. Let us just say the finale of Black Coral is as intense as it gets and right up there with the best crime fiction I have read in quite a while!