Book Review: Back Door to Hell by Paul Gadsby 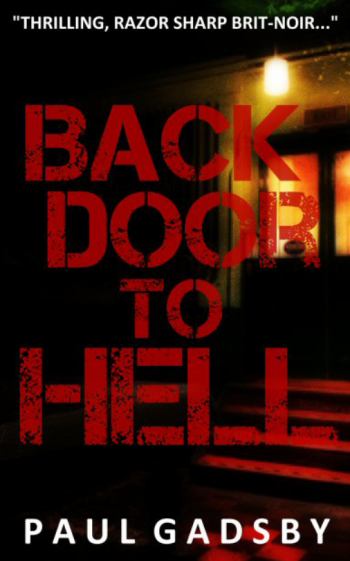 Back Door to Hell

In Back Door to Hell by Paul Gadsby, boy meets girl. Girl has a plan. A plan that’ll change everything. If only they didn’t steal from the wrong person…

Nate Stokes, the most central character of Paul Gadsby’s new novel, Back Door to Hell (published by Fahrenheit 13, an imprint of Fahrenheit Press), has a ne’er-do-well aura around him. 22 years old, Nate’s a guy who did well enough in school and has an interest in, and capacity for, journalism. But a combination of apathy, lack of money to pay tuition, and discouragement about future prospects kept him from pursuing a university degree. He’s officially unemployed at the time of the story, having been laid off from his most recent job as a storage depot laborer. He collects unemployment funds for his pocket money, and his brother helps him pay the rent on his flat. He’s a resigned underachiever.

But Nate actually has a job—albeit a temporary gig, and one that’s unpaid and about which few people in his life know. He’s putting in a month’s worth of unremunerated toiling at a snooker club that’s owned by a London crime boss—the same fella from whom Nate’s brother earns his less-than-legitimate pay. Nate owes a debt to this man, Crawford, who smuggles drugs in addition to operating several profit-seeking establishments such as bars, nightclubs, glamour spas, and the snooker club where Nate temporarily serves drinks and oversees rentals of the tables.

One of Nate’s coworkers (one who actually gets paid by Crawford) at the snooker hall is a young woman named Jen Whittaker. She’s a college art student who keeps herself financially afloat via shifts at Crawford’s club. Jen, to whom Nate is immediately physically attracted, isn’t much more optimistic than he is about the state of employment opportunities in England. But she’s more ambitious than him, although she’s not the kind of go-getter of whom a parent would generally feel proud. Jen has a design on stealing a large amount of money from her employer. And, once she gets to know Nate a little, she wants him to join her in the scheme.

In an early part of the novel when Jen is talking to Nate, we see why she has come to feel that such a gambit as embezzling from a dangerous crime lord is not only worth the risk but the only kind of option she sees for herself in life:

I think a lot about getting myself a decent life. Quality clothes that make me feel good, a nice car, a detached house, foreign holidays, eating out in proper restaurants, nothing too flashy or anything like that, but I want to be looking towards the bottom of the wine list rather than the top . . . But I’m not going to get any of that if things stay as they are. I don’t come from money. My parents are skint after getting divorced and they never had that much, anyway. I need more than just getting by. Crawling up the ladder rung by rung, I don’t think that works anymore. Too many places keep going bust, too many niche industries keep getting wiped out. I need to jump loads of steps in one go to make things happen.

It’s not giving away much of the book’s plot to reveal here that Nate agrees to go in on the heist scheme with Jen. But details of the robbery effort and its aftermath are best learned about by reading the novel. Suffice it to say that the tale becomes a suspenseful road story, with an abundance of colorful characters—both underworld figures and everyday people—flitting in and out of the ever-changing series of developments. It’s an exhilarating thriller that contains scenes and situations involving love, violence, revenge, friendship, possible hope in the face of demoralizing circumstances, chase scenes, parental challenges, and more.

What sets Back Door to Hell apart is its naturalness. The same is true of Gadsby’s prior novel, 2014’s Chasing the Game. While other contemporary crime fiction scribes go out of their way to make sure their books have the fashionable noir qualities, there’s no such affectation in Gadsby’s work. His characters are believable, his storylines are interesting, and his writing is organic. And he excels at revealing the multiple dimensions of his characters’ life situations and internal makeup, as he does in the scenes in Back Door to Hell that show the crime boss, Crawford, and his wife’s struggles with having an autism-afflicted child who gets picked on at school. Crawford is a hedonistic and sadistic man whose conscience isn’t bothered when he orders vicious assaults on people who create complications in his greedy pursuits or cheats on his wife while taking advantage of his female employees—and yet, he’s a caring parent who hurts inside, the way any of us would, when he hears about his son getting abused by bullies.

This is a novel that seems ripe for film adaptation. A knowing director could have a good time casting the many intriguing characters, both major and minor.