Book Review: As Long As We Both Shall Live by JoAnn Chaney 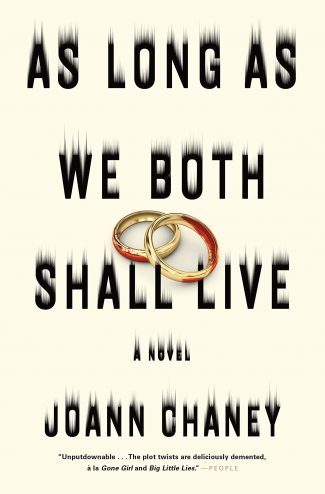 As Long As We Both Shall Live

As Long As We Both Shall Live is JoAnn Chaney’s examination of a marriage gone very wrong, a marriage with lots of secrets…

Husbands killing wives and vice versa never goes out of style. Recall Winston Churchill’s ongoing brangle with fellow parliamentarian Lady Astor (who was most critical of Churchill’s consumption of cigars and alcohol).

Of their famous squabbles, the most memorable is when Astor commented, “If you were my husband, I’d poison your tea.” Churchill’s riposte? “Madame, if you were my wife, I’d drink it.”

Newlyweds vow to love each other, “as long as we both shall live,” but divorce lawyers would go out of business if that was the case. A recent estimate is that “50 percent of all marriages in the United States will end in divorce or separation.” JoAnn Chaney opens As Long As We Both Shall Live with quotes that reverberate through the pages, particularly one by Danny DeVito, from the movie The War of the Roses:

Matt the murderer kills his first wife Janice in 1995 in Madison, Wisconsin, and his second wife Marie, in 2018, Estes National Park, Colorado. To paraphrase Charles Dickens, he offed them: “There is no doubt whatever about that.” Harkening back to Danny DeVito’s words, neither wife is all that thrilled to be married to Matt. He’s a self-obsessed, selfish, self-delusional philanderer. Janice (1995) says to herself when she catches Matt in flagrante delicto, “Quit acting surprised, you knew what was going on this whole time.” But as any cheated-upon spouse will tell you, there’s a powerful distance between suspecting and knowing.

And now that she knew for sure—no denying it, Matt was a douchebag supreme, an unfaithful POS—what was she going to do? Because she couldn’t ignore this now. If she didn’t do anything, if she kept on pretending things were normal and let Matt do whatever he wanted, didn’t that make her guilty, too?

Marie and Matt are hiking in Estes National Park, going higher and higher as the long August day stretches out. Marie has ample opportunity to think about her twenty-year-long marriage. She’s an empty-nester now—their two girls are in college, and no one needs he. “She’d always thought the girls would grow up and she’d be free, but the freedom had just ended up being loneliness.” Janice and Marie both had divorce on their mind, but they left it too late. Or did they?

The woman’s scream echoed off the sheer rock face, and birds lifted from the trees, startled into flight.

A single gunshot rang out. A few people woke, but then went back to sleep. They all thought it was a dream.

As Long As We Both Shall Live switches gears into a fascinating police procedural…and the results are, shall we say, unexpected. Marie turns out to be much more than what she seems on the surface: her friends recall a woman determined to get her own way, in all things. And Janice too, maybe she didn’t get charred to the size of a charcoal briquette all those years ago. Readers need to suspend their disbelief because the twists and turns of this story aren’t predictable in the least—you’re going headfirst down an Olympic luge run. Spoilers prevent a reviewer from saying more but this for sure, JoAnn Chaney’s sophomore novel is unforgettable.

Check out our GIFnotes Visual Guide for As Long As We Both Shall Live.