Book Review: After We Were Stolen by Brooke Beyfuss

July 27, 2022
Brooke Beyfuss'After We Were Stolen is an emotionally wrought, twisty coming-of-age story about a girl who escapes from a cult after a deadly fire destroys her family's compound. Check out Doreen Sheridan's review! 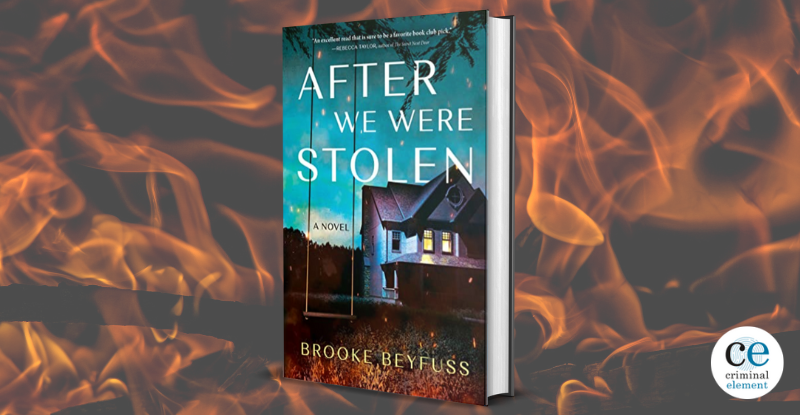 It’s hard to believe After We Were Stolen is Brooke Beyfuss’ debut novel. It’s so assured and lived in I had to keep reminding myself it was fiction, and not the actual memoirs of a young girl escaping a cult.

Not that our heroine Avery knows that’s what she’s living in. As far as she’s concerned, her family sensibly keeps to themselves on their forty-acre compound, staying clear of the perimeter while preparing for the end of the world:

My parents had been running the compound ever since my grandfather died. My grandfather, my father’s father, was the first of the chosen, the one who saw the signs the world was dying. Not the earth but the people. And he knew that the only way to survive was to know how to live once everyone else was dead. The earth was full of gifts, he told us, but only if you knew where to look. Those were the lessons he taught his followers–how to find the right provisions, how to use them, how to survive.

Avery, her parents, and her ten siblings work hard to hone their survival skills, repeating the mantra of “Focus, shelter, water, and fire” to remind themselves of their priorities. As the book opens, Avery has been exiled to the outdoors, left to fend for herself and toughen up for some unspoken reason. Avery knows better than to question her father’s pronouncements though, no matter how unfair. If she does, her beloved younger brother Cole will also be punished for her disobedience. In fact, each of the siblings has a different “partner” whom they’re responsible for, and another who will be punished should they fail in their duties.

Things go from bad to worse quickly, as her parents decide that nineteen-year-old Avery must take on a horrifying new responsibility for the sake of the family. When she wakes up one night to find the compound on fire, she seizes the opportunity to run away with sixteen year-old Cole, who is more reluctant than she is to leave behind everything they’ve ever known and loved. But the abuse Avery has undergone stiffens her resolve, even as they discover the outside world is far worse than they expected:

There was nothing natural about this place. The trees weren’t even allowed to grow out of the ground. But that wasn’t the worst part.

The worst part was the people.

They looked just like me. They looked like Cole. When you stripped away everything, Cole and I didn’t look chosen. We looked like what we were: dirty and confused and terrified. I could feel it fall away, that last thin veil of protection, even though I knew in my thrashing heart that it had never really been there at all.

Forced into urban homelessness, Avery and Cole struggle to survive, until getting arrested and fingerprinted uncovers a shocking truth: They’re not actually birth siblings; rather they were both kidnapped from separate families as very young children. Everything they thought they knew about themselves is a lie. While Cole is swiftly returned to his family, Avery has to struggle to make sense of her new reality, even as she lives in fear of their not being the only survivors of the fire.

This was a powerful and deeply nuanced portrayal of a young woman finding the strength to leave abuse behind and come to terms with the world outside of the web of lies that was once all she knew. Avery’s pain is palpable, and so realistic I had to keep telling myself this was just fiction even as I was mopping up my tears. My heart hurt for her and for Cole, as they’re separated and forced to cope with their new lives without each other’s unwavering love and support.

I also want to register my appreciation for the author’s note that prefaces the story. Her thoughtful introduction serves as a content warning for After We Were Stolen without spoiling the story or talking down to potential readers, and really ought to serve as a template for other authors who deal in sensitive content. Ms. Beyfuss is a formidable new talent, whose skill with language and storytelling are well-matched by her compassion and empathy. I can’t wait to read more of her work.