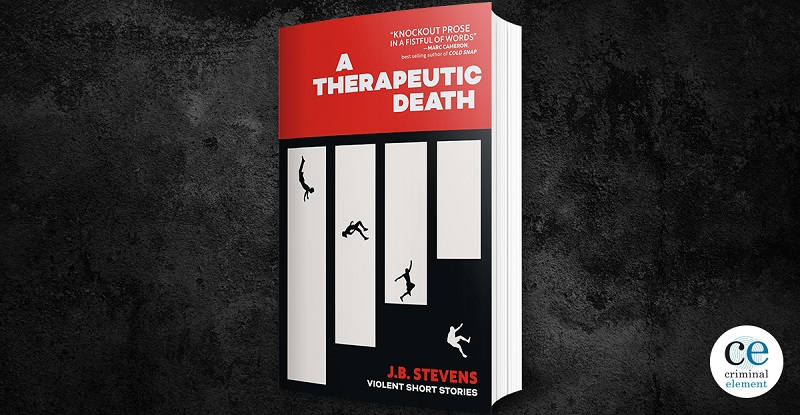 J. B. Stevens’s debut crime and military fiction collection, A Therapeutic Death (Shotgun Honey, out February 4, 2022), lets the reader know right up front: it’s going to get dark. You see it in the cover design, reminiscent of some late ‘70s or early ‘80s pulp film (Sharky’s Machine, anyone?), and again in the book’s ominous subtitle: Violent Stories. If the cover doesn’t make it abundantly clear what’s in store, the first story, “To Keep a Secret,” firmly establishes the tone. Keith and Barry meet at a cafe in north Georgia. Keith has set aside the effects of war to start a family and a business. Barry, however, is mired in memories of a horrific act in which they both took part while deployed, and which they only elliptically discuss. Barry’s one escape from the trauma is through narcotics, and it’s gotten bad. He wants money from Keith, who knows he shouldn’t feed Barry’s habit, but who also has the most to lose if Barry were to spill what he knows. Faced with this liability, what’s a respectable family and businessman to do?

From there, A Therapeutic Death compiles nearly two dozen stories of people at their gravest inflection points–junctures where they must choose between the light or the darkness, though those may not be equally attractive options under the circumstances. In “A Reliable Belt,” for example, a felon plans to escape the poorly guarded halfway house where he’s housed so he can return to his family in Brazil. “Vagner Dos Santos didn’t want to kill the guard,” the story begins. “He had no choice.”

Likewise, in “The Exit,” a UFC fighter on the take decides whether he’s ready to go straight with his gym business partner. On the opposite end of the spectrum, “Dead Camel” finds an aging defense contractor choosing to attempt one truly good and meaningful act in the chaos of an Iraqi war zone.

The collection displays an impressive range, from the darkest of noir to war fiction so immersive and ringing with authenticity, that it brings to mind Phil Klay’s lauded collection Redeployment. Stevens even includes the odd-man-out “Maybe I Don’t Want To Be Found,” a first-person account of the “Where’s Waldo” craze in Waldo’s own words, concluding with a plea for everyone to please stop stalking him. It’s a ditty reminiscent of the author’s pop-culture poetry collection, The Best of American Cannot Be Seen (Alien Buddha Press, 2021), and about the only true moment of levity offered in the collection.

Throughout, Stevens’s prose is stark and minimalist, displaying the choices and actions of his characters unadorned. The effect is one of immediacy, denying the reader any aesthetic cushion. Consider this passage from “A Reliable Belt”:

Vagner ran over and kicked Young in the face. Young screamed and tried to get up. Vagner kicked him three more times in the head. Young stopped trying to get up.

Understated cause-and-effect prose only serves to highlight the horror of the moment and, surprisingly, to mine it for humor. Likewise, these stories spare little time for background, choosing instead to drop the reader directly into their make-or-break moments and allowing the characters’ dialogue and actions to speak for themselves.

A Therapeutic Death overflows with red meat for the hardboiled and war fiction fan. But they’re lean cuts, trimmed of all fat. The result is a breathless and compelling collection that will linger with the reader long after they’ve closed the back cover. And it announces the arrival of an exciting new voice in crime fiction.

C. Matthew Smith is an attorney and writer whose short stories have appeared in and are forthcoming from numerous outlets, including Mystery Tribune, Mystery Weekly, Close to the Bone, and Mickey Finn: 21st Century Noir Vol. 3 (Down & Out Books). He’s a member of Sisters in Crime and the Atlanta Writers Club.