October 8, 2021
In Dorothy St. James's A Perfect Bind, librarian Tru Beckett, ardent defender of the printed word, is about to find out that keeping murder checked out of her beloved library is much harder than she thought... 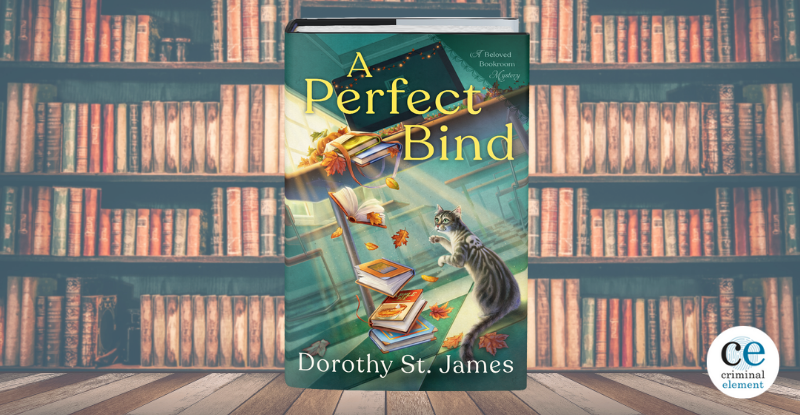 Rogue librarian Tru Becket is certain she’s successfully established her illicit bookroom beneath the Cypress Public Library, having salvaged a good number of the physical library books the town had previously chosen to discard in favor of going electronic-only. Known only to a select circle, the bookroom serves those who favor the feel of books over the convenience of technology, an attitude not shared by everyone in their South Carolina town. Because of this, Tru must live a rather stressful double life running the bookroom below while pretending to toe the party line in her actual place of employment above.

Things get even more stressful when a vandal starts trashing the bookroom after hours, flinging books around with reckless abandon for Tru to find in the morning when she opens up the place. But everyone who knows about the room is a book lover, and Tru is certain that none of them would ever treat books so poorly… would they? The president of the local historical society, Hubert Crawford, is certain it’s the work of a poltergeist, which Tru finds an even less likely theory than sabotage by a disgruntled bibliophile.

But then local mechanic Owen Maynard is found dead in his truck right by the back entrance to the bookroom, giving Hubert even more fuel for his theory:

“Here’s the thing.” His speech cadence thankfully did pick up speed. “A man was killed behind the library back in August of 1921. Does that sound familiar?” He thumped the newspaper article. “Like Owen, this man was drunk. Unlike the situation with Owen, drinking was illegal at the time.”

He looked at me as if that should be enough information to convince me to believe in the poltergeist.

“Thank you,” I said, and pulled the door open. “That’s something I’ll have to think about very carefully.”

Hubert’s suspicions are easy for the practical Tru to politely brush off. While Owen’s death was a tragedy, Tru is certain it’s unrelated to the bookroom, as Owen hadn’t been privy to their secret. Less easy to brush off, however, are the attentions of handsome police detective Jace Bailey, who knows that Tru is hiding something but doesn’t know exactly what. Tru has had a prickly relationship with Jace since high school, when he was the star quarterback and she was a geeky nobody. Now he’s interested in her romantically but she’s more interested in protecting her bookroom. When it looks like Owen’s death might have something to do with her beloved sanctuary after all, will she be able to risk trusting Jace in pursuit of the truth?

Add to the engrossing murder mystery a scrappy battle to bake Cypress’ best apple pie as well as a religious protest against one of the classes the technophilic Anne Lowery is trying to add to the library’s offerings, and you have the recipe for a rollicking southern cozy. Tru’s attempts to run her illicit bookroom and solve mysteries while dealing with her friends and fellow townsfolk, all while deferring to her extremely proper Mama, make for very entertaining reading.

But it isn’t all comic hijinks. Tru has reason to pause and reflect when a loved one’s life is endangered by her investigations:

If he was dead, it was my fault. My folly had brought us to this. Why in the world did I think I could handle bringing a murderer to justice? Just because I’d read a few hundred (or more) books on the subject? I read fiction. Fiction, for goodness’ sake. Well, I’d read a few true crimes and some procedural handbooks, but mainly I turned to fiction for my crime fix.

Justice. I’d been hungry for justice. Who wasn’t in this world today?

I really enjoyed Dorothy St James’ A Southern Chocolate Shop culinary cozy series, and while this novel unfortunately did not showcase the same amount of diversity as her prior series, it was just as funny and smart. The many subplots were engaging, as well as clever in laying plentiful false trails for the reader to follow in pursuit of the solution to the main murder. I’m excited to read more of this engaging series, especially since I’m one of those people who loves the reconciliation of the traditional and modern, in reading especially. Bonus points too for a delightful frisson of the supernatural!