Book Review: A Field Guide to Homicide by Lynn Cahoon

January 28, 2020
In the sixth installment of the Cat Latimer Mystery Series, Lynn Cahoon's protagonist hits the Colorado trails where, unbeknownst to Cat, a murderer has been lurking off the beaten path... 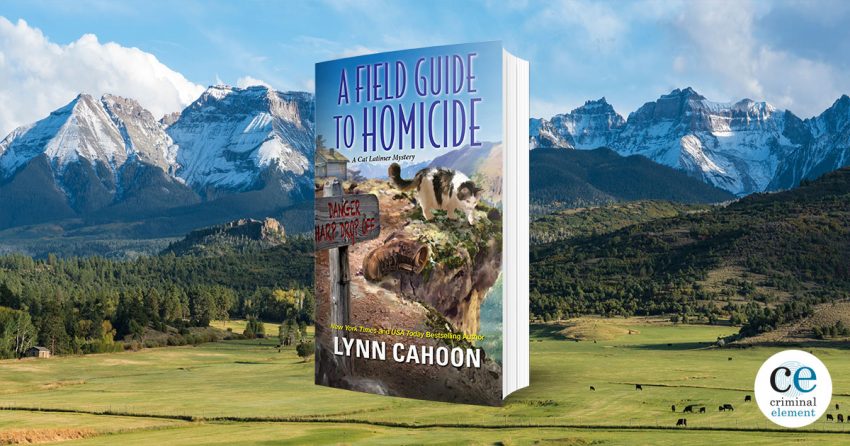 Cat Latimer is feeling a little differently about the latest group of writers attending her retreat. For a start, they’re all coupled up and a lot more self-sufficient than most of the writers’ groups she usually hosts. So it’s actually something of a relief that their mutual enthusiasm for the outdoors means they get to spend time together chatting about writing while hiking on day trips through the Colorado Rockies. Led by Cat’s boyfriend, Seth Howard, the hikes are mostly scenic and easy… until they stumble across the recently deceased corpse of a reclusive gold miner.

It comes as a further shock to the group when the dead man turns out to be Chance McAllister, a former military buddy of Seth’s. Thing is, Chance was supposed to have died while stationed in Germany decades ago. Seth doesn’t really like to talk about his time in the army, and Cat ordinarily wouldn’t push. However, Chance’s murder and her own interest in writing a novel set in a magical boot camp have her wondering where the line is between being a considerate partner and walking on perpetual eggshells. When it looks like Chance’s death could personally involve Seth as well as endanger Cat, the pair will have to face the things they haven’t wanted to talk about in order to escape a calculating criminal.

This was a really good installment in the Cat Latimer series, featuring lots of emotional upheaval that pointed the way forward for Cat and Seth. Additionally, the regular supporting characters make appearances that build on their stories. Cat’s Uncle Pete explores his long-distance relationship with his girlfriend, and, in my personal favorite subplot, Cat’s best friend Shauna comes to terms with her brother while working on her cookbook. I also felt that this book was a bit more suspenseful than usual for the series, particularly while on the hikes:

It must be her writer mind that made up stories as she walked, [Cat] thought. She was always putting her characters in danger, then upping the ante just as they thought they were clear. It was kind of like they needed to earn their happy ever after. If she was one of her characters, she’d be really mad at her author, especially if something happened to them over the crest of that mountain.

Her heart pounded as she lost sight of [her writers]. Cat quickened her pace. She didn’t want to take a wrong turn and get herself lost. That would be embarrassing. As she crested the hill, she didn’t see anyone on the trail. She pushed her walk into a little jog, then as she went around a corner, someone stepped out of the woods and into her path.

A Field Guide To Homicide upped the ante on every aspect of the series, making for a very enjoyable reading experience. From the mystery itself to the development of our characters’ relationships, it was a seamless read that felt lived in as opposed to created.

Unique amongst its brethren, this fiction series has always excelled in its insightful real-life advice for writers, from the process of creation to publication and beyond. While a lot of books with writer protagonists adopt a fairly vague attitude to the craft, Lynn Cahoon isn’t afraid to get into the nitty-gritty of the realities contemporary authors face when trying to get their beloved books into readers’ hands:

Cat knew it wasn’t always about the quality of the writing or the story that made the difference in a possible sale. A lot of times it was about the market and what publishing houses were buying. If the idea didn’t ring for her agent, she’d put the story away and start something new. But she really, really wanted to write this story and a few more books afterward.

That’s why she loved working in series. The story was never totally complete, and the world she’d built stayed alive as long as she was writing it. Details fell away, but she’d be walking in town or in a new part of Denver she’d never seen and think, this would be a great place for a character to live. Or work. Or have grown up. The stories were always with her.

Informative as well as entertaining, A Field Guide To Homicide is the perfect book for cozy mystery lovers who entertain thoughts of writing novels themselves. It’s not necessarily the best jumping on point for the series but this is, without a doubt, one of the best Cat Latimer novels to date.