February 15, 2021
Una Mannion's A Crooked Tree is a haunting, suspenseful literary debut that combines a classic coming of age story with a portrait of a fractured American family dealing with the fallout of one summer evening gone terribly wrong. 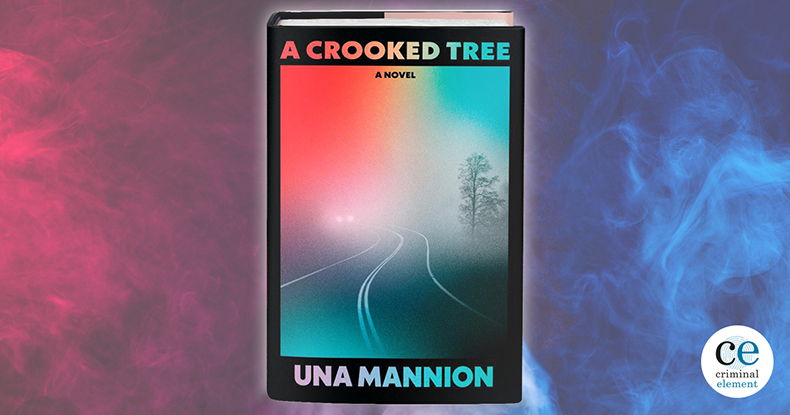 Every year readers wait in anticipation of the debut releases from new authors that will make an impact on them.  It is hard to believe that it is only January and I have already read three debut authors’ releases that have ranged from very good to superb.  I am pleased to say that A Crooked Tree from Irish author Una Mannion is at the superb end of that scale.

It’s set in the early 1980s, a great time in American history and a far more innocent age than what we currently live in.  Our protagonist, fifteen-year-old Libby, is riding home in a car driven by her Mom and packed with her siblings, older sister Marie, older brother Thomas, younger sister Ellen, and the youngest sibling, half-sister Beatrice.  As they travel the roads that will bring them back to their home in suburban Pennsylvania just outside of Lancaster the kids start to get disruptive.  Mom has had enough and decides to teach a lesson to the child she believes was the main cause for the disruption.  As such, she kicks eleven-year-old Ellen out of their car and tells her to walk home from there — still a good distance, especially as dusk is falling.

It sounds like the perfect set-up for a thriller novel with the young girl never being seen again.  Not the case here — but Ellen does not return to them completely untainted.  When she is not home for a while everyone begins to get nervous and Libby decides to head out on her own to find her younger sister.  She calls on her best friend Sage to help with the search.  Meanwhile, Marie calls a local teen named Wilson “Psycho” McVay to ask for his assistance as he is old enough to drive — both cars and motorcycles — and knows the area well.  Young Ellen eventually returns but is dirty and bruised.  She tells a story of hitch-hiking home and being picked up by a creepy guy with excessively long white-blonde hair who acts very inappropriately towards her. She jumps out of his moving vehicle and stumbles home from there.  She begs her sisters to not tell anyone, not the police and definitely not their mother.

This does not sit well with them as the kids all want justice for Ellen. Their father had passed away and they did not have much of a relationship with their mother, so they are pretty much on their own with this endeavor. Libby goes to her special place to think things through. That would be the crooked tree in the woods that looks like it was split by a bolt of lightning.  Libby and Sage found it and dug out the inside of the tree to set it up as an emergency location containing things like sleeping bags and flashlights if they ever needed a place to run to.  Their own back-story for the tree was that it was one the Indians once used as a signpost to signal where there was good hunting or soft ground for shelter.

Marie gets Wilson involved and he and a few of his buddies head off to search for a strange man who tried to accost Ellen — locating him from the unique make of car he drove.  When he returns, he tells Marie and Libby that the long-haired creep got what was coming to him.  They do not know whether to believe him or not.  All they know is that they believe they see this character again at the local mall and fear he may be seeking revenge or, even worse, another crack at abducting Ellen.

A Crooked Tree is so much more than a mere thriller or coming-of-age story.  Mannion really makes you feel for each of these characters and the depictions of adolescents who are growing up without true adult supervision, and the dangers that may stem from that is heart-breaking.  In this situation, it will take more than just secret trees and good friends to save you from the bad boogeymen who roam the backroads of small-town America and this tale will have you on the edge of your seat right up until the chilling finale.  I predict great things for Una Mannion!