Bones and the Mississippi Delta: The Origins of Sarah Booth Delaney 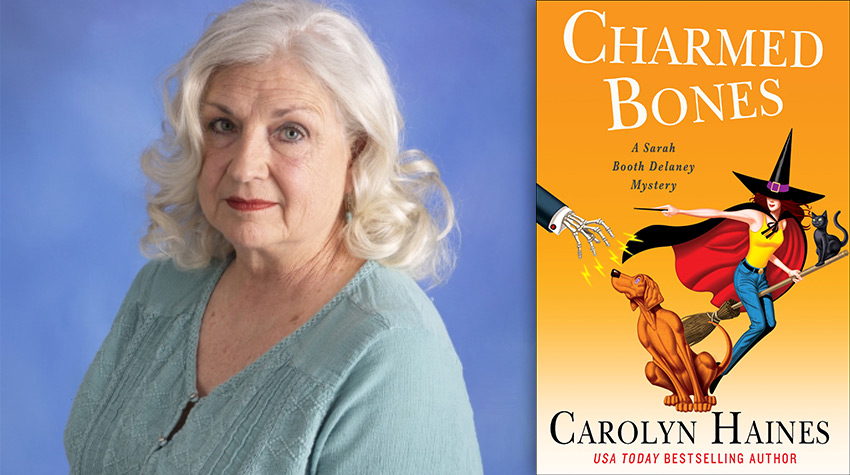 Almost two decades ago, I was sitting at my computer looking out the window at my horses grazing in the pasture. The dogs were sleeping, and the cats were plotting anarchy, but I had bigger problems. I’d finished my last book contract, and I was in that delicious place where I could write anything I wanted. I’d met with my agent in New Orleans and gone over several possibilities—stories that I loved and wanted to tell. I hadn’t made a choice yet.

As I watched the horses, so at peace and content, I heard two women bickering. I didn’t know who they were or why they were in my head, arguing. They were heated but funny—I began to write down their conversation. I’d never had a book present itself aurally, but these women were hysterical. They were Southern, without a doubt. They were smart and sassy. The more they talked, the setting began to fill in. They were in an old plantation house surrounded by cotton fields. One was named Sarah Booth Delaney—the other was Jitty, a woman I soon learned was a ghost. They lived in the Mississippi Delta.

Read an excerpt from Charmed Bones!

I am a native Mississippian, born and bred. I grew up in the southeastern corner of the state in what is called the pine barrens. This is “40 acres and a mule” territory—not the vast 6,000-acre farms of the Delta. My county was poor, not wealthy. I had no idea why these Delta people were yammering in my head, but I had to find out what was going on.

For most of my life, the Mississippi Delta was an exotic land of extreme poverty and great wealth. There was no middle ground, no middle class.

I had a college friend from Greenwood, Mississippi, so I knew a little about the Delta from Pattie. She’d grown up there and beat it for New York City and Los Angeles as fast as she could. It wasn’t that she didn’t love her homeland, only that the opportunities she sought could not be found there.

My first real experience in the Delta was going into Mississippi State Prison at Parchman (once notorious for abuse of inmates) undercover to do a story on conditions at the prison. I was a newspaper reporter, and this was a story begging to be told.

I can remember standing in the yard of the women’s compound looking out to the horizon that stretched into the distance, a blur of green meeting a cloudless blue sky. Cotton, cotton, and more cotton. The prison was over 20,000 acres of cotton. I’d never seen a vista so flat and so valuable. King cotton was and still is the money crop.

The legend of the Delta is that the topsoil is 8-feet deep, so rich it can grow anything. The bounty of the land comes from the once annual flooding of the Mississippi River. Now, the levees prevent flooding, and chemical fertilizers have taken a toll. But the panorama of the Delta is still one of the starkest and most beautiful I’ve ever seen. There are miles of fields without trees, and then, suddenly, the spire of a small church will thrust out of the green plants. Church is a big part of Delta life for many residents.

Church and music. Gospel and the blues. Church music for Sunday morning, and that low down and gritty sound of the blues in the wood shanty jukes on a Saturday night.

When I first started writing about Sarah Booth and this wild land of contrasts, I had the great fortune of traveling over the Delta with a good friend. He’d grown up there, in a land where survival could sometimes be tough. Where drinking and dancing were the rewards for a hard day of toil. We traveled the entire region visiting places he’d known as a young man, photographing churches, and visiting the jukes where hard times and hope were woven into the music. This trip was an education for me into the soul of my own state. The Delta was a place I’d read about and seen but never truly dug into. This trip also gave me the gift of my characters—because as I came to understand the Delta, I came to know Sarah Booth Delaney, Tinkie Richmond—the queen Daddy’s Girl—Cece, Millie, and Coleman Peters.

Thanks to my wonderful team at St. Martin’s, I’ve written these characters now for two decades. In the magical world of fiction, my characters have aged less than two years. I have not been so lucky. But as I’ve passed the seasons on my small animal refuge and farm in Semmes, Alabama, writing about Zinnia, Mississippi, and the residents there, I have also learned more and more about my characters. They are rooted in that alluvial soil as firmly as any of the majestic live oak trees here in Semmes. And my roots have grown there too, an adopted daughter of the region.

Someone once asked me if Sarah Booth could live somewhere else? I’m sure she could, but I am not the writer to tell of those adventures. She is part and parcel of that Delta soil that folks say “smells like money.” She is a child of the harsh contrasts of rich and poor, black and white. Those things have made her who she is—and have also given me the joy of writing stories about a place, a time, and a people that are changing, always changing.

Carolyn Haines is the USA Today bestselling author of the Sarah Booth Delaney mystery series and a number of other books in mystery and crime, including the Pluto's Snitch paranormal-historical mystery series, and Trouble, the black cat detective romantic suspense books. She is the recipient of the Harper Lee Award for Distinguished Writing and the Richard Wright Award for Literary Excellence. She is a former journalist, bartender, photographer, farmhand, and college professor and lives on a farm where she works with rescue cats, dogs, and horses.