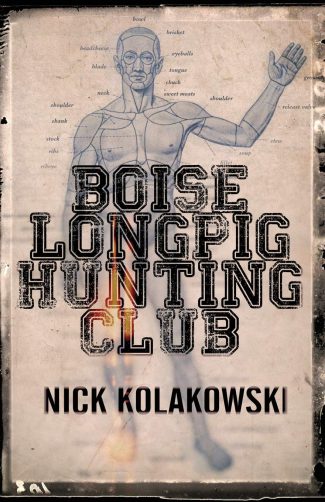 Boise Longpig Hunting Club by Nick Kolakowski is a wild ride into the dark heart of the American dream, where even the most brutal desires can be fulfilled for a price, and nobody is safe from the rich and powerful.

When you want someone found, you call bounty hunter Jake Halligan. He’s smart, tough, and best of all, careful on the job. But none of those skills seem to help him when a shadowy group starts taking his life apart piece by piece.

First Jake comes home to find a dead body in his gun safe. He thinks it’s a warning–and when you drag people back to jail for a living, the list of people who want to send that kind of message is very long indeed. With backup from his sister Frankie, an arms dealer and dapper criminal, Jake plunges into the Idaho underworld, confronting everyone from brutal Aryan assassins to cops who want his whole family in jail.

But as Jake soon discovers, those threats are small-time compared to the group that’s really after him. And nothing–not bounty hunting, not even all his years in Iraq–can prepare him for what’s coming next. Jake’s about to become a player in the most dangerous game ever invented…

In another lifetime, I might have become a cop myself. People would have said I was following a family tradition.

My daddy was a deputy in the days before meth poisoned this country to its core. As a kid, I worshipped him as the second coming of Wyatt Earp. Whenever he came home after a shift I would sit on his bed and watch with religious awe as he stripped off his scuffed leather duty belt and unloaded his pistol before locking both items in his bureau drawer. He would tell me about his day, sanitized for my young ears, in which the knights of law and order always won against the monsters.

On a blustery winter night many years later, a few of his fellow deputies cornered me in a bar and spewed out my old man’s sins, from his habit of sleeping on the job to his piss-poor marksmanship. By that time, I had discovered most of the truth about his career on my own, but it required every ounce of my self-control to not break those bastards in half. My sister Frankie and I loved my daddy.

When I was in high school, my daddy was terminated by the department for talking back one too many times to his superior officer. But I knew the real reason had everything to do with a gunfight near the reservoir that resulted in the deaths of three cocaine smugglers on a little road trip from Juárez. Actually, “gunfight” is too strong a term. From what I pieced together as an adult, it was more of an execution, and nobody logged any coke into evidence. When the FBI began sniffing around, the cops cut my daddy loose with a warning to keep his mouth shut. Whatever happened to the drugs, I know he never profited from it, because we always had trouble paying our bills.

My daddy was done in law enforcement after that. He took a job as a guard in a new for-profit prison fifty miles north of town, trading in his departmental sidearm for a can of pepper spray and a riot gun loaded with nonlethal plastic buckshot. They assigned him to the lunatic tank, where he spent his shifts in a folding chair in front of the cells, making sure nobody used a sheet or their underwear to hang themselves from the bars. Some nights he had to dodge the shit thrown at him, or call maintenance to deal with a prisoner stuffing their clothes in the toilet.

My daddy’s coworkers included an eighteen-year-old kid looking to make a little money before starting college, a drunk with a DUI on his record, and an overweight dude with narcolepsy. All were present on the cell block when a prisoner named Wade Lee Child shoved a sharpened toothbrush into the back of my daddy’s neck, but none did more than scream and wave their arms as he bled to death on the concrete.

I spent the next three months in hell, punching anyone who tried to offer their condolences. After that first wave of grief tore through me, I decided to cut a pound of flesh in my daddy’s name. I started with his eighteen-year-old colleague, a mouth-breathing moron named Andy, who told me nothing until I broke his nose. Then he admitted to panicking when that lunatic shanked my daddy and running into the prison yard instead of phoning medical. As a reward for his honesty, I only broke Andy’s right arm in two places.

But I was minor league compared to my sister. There was no way that Wade Lee Child would ever leave prison a free man, and while he waited for a fresh trial, the administrators—dumbasses all—cycled him back into general population. Frankie became fast friends with a woman whose brother was on the same block, and who had access to a cell phone the prisoners hid in a mattress. In exchange for a hundred bucks to the woman and another fifty to a couple of prison-commissary accounts, Frankie ended up on the line with Wade Lee Child.

The next day at dusk, obeying Frankie’s instructions, Child walked to a section of the fence beneath the northwest guard tower, which stood unmanned due to the corporation’s cost-cutting measures. Our daddy once told us that the sensors in that section, installed to alert the guards if anyone touched the fence, had burned out long ago. Frankie shared that information with Child, and because the man had an I.Q. roughly equivalent to his shoe size, he never bothered asking the mystery woman on the phone why she wanted him freed.

Child climbed the fence, up and over in five minutes, and disappeared into the miles of scrub that ringed the prison. It would take forty minutes for anyone to notice he was missing, and another five for a guard to trigger the alarm. Child headed in the direction of the setting sun, the brush scraping at his face and plucking at his clothing, humming a mindless tune. If he had kept on that course, he would have been caught within the hour. Instead the guards found nothing except his footprints, and a fresh pair of tire-tracks heading south.

Three nights later, a Burger King manager discovered Child’s severed head atop a dumpster behind the restaurant. Someone had smashed out Child’s teeth so his mouth could fit a severed piece of his anatomy.

Yeah, Frankie got her pound of flesh, too.