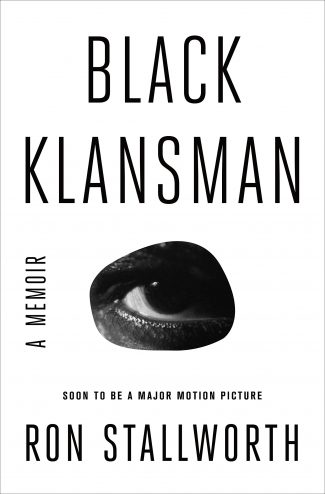 Black Klansman by Ron Stallworth is an amazing true story that reads like a crime thriller as well as a searing portrait of a divided America and the extraordinary heroes who dare to fight back.

Prefer audiobooks? Click here to listen to Chapter 1 instead!

When detective Ron Stallworth, the first black detective in the history of the Colorado Springs Police Department, comes across a classified ad in the local paper asking for all those interested in joining the Ku Klux Klan to contact a P.O. box, Detective Stallworth does his job and responds with interest, using his real name while posing as a white man. He figures he’ll receive a few brochures in the mail, maybe even a magazine, and learn more about a growing terrorist threat in his community.

A few weeks later the office phone rings, and the caller asks Ron a question he thought he’d never have to answer, “Would you like to join our cause?” This is 1978, and the KKK is on the rise in the United States. Its Grand Wizard, David Duke, has made a name for himself, appearing on talk shows, and major magazine interviews preaching a “kinder” Klan that wants nothing more than to preserve a heritage, and to restore a nation to its former glory.

Ron answers the caller’s question that night with a yes, launching what is surely one of the most audacious, and incredible undercover investigations in history. Ron recruits his partner Chuck to play the “white” Ron Stallworth, while Stallworth himself conducts all subsequent phone conversations. During the months-long investigation, Stallworth sabotages cross burnings, exposes white supremacists in the military, and even befriends David Duke himself.

A CALL FROM THE KLAN

All of this began in October 1978. As an Intelligence Unit detective for the Colorado Springs Police Department, the first black detective in the history of the department, I might add, one of my duties was to scan the two daily newspapers for any reports of information concerning any hint of subversive activity that might have an impact on the welfare and safety of Colorado Springs. It’s surprising what some people will put in the paper: prostitution, obvious money schemes, that sort of thing mostly, but every once in a while there’s something that really stands out. As I looked over the classified ads, one in particular caught my eye. It read:

Now there was something unusual.

The town of Security was a suburban housing development area located southeast of Colorado Springs near two main military bases: Fort Carson and NORAD (North American Aerospace Defense Command). The community was predominantly military, and there had been no known Klan activity in these parts.

So, I answered the ad.

I wrote a brief note to the P.O. box explaining that I was a white man interested in obtaining information regarding membership in the KKK and furthering the cause of the white race. I wrote that I was concerned with “niggers taking over things,” and that I wanted to change that. I signed my real name, Ron Stallworth, gave the undercover phone number, which was an unlisted, untraceable line, and used the undercover address, also untraceable. I placed my note in an envelope and dropped it in the mailbox.

Why did I sign my real name to the note, which would go on to launch one of the most fascinating, and unique, investigations of my career? Like all of our undercover investigators, I maintained two separate undercover identities with the appropriate support identification, driver’s licenses, credit cards, etc. So why did I have this lapse in judgment and make such a foolish mistake?

The simple answer is I was not thinking of a future investigation when I mailed the note. I was seeking a reply, expecting it would be in the form of literature such as a pamphlet or brochure of some kind. All in all I did not believe my efforts would have any traction beyond a few mundane auto-mailed responses. I believed this blatant placement of such an inflammatory racist ad was nothing more than a feeble attempt at a prank, and by answering it I would see how far the prank would play itself out.

Two weeks later, on November 1, 1978, the undercover phone line rang. I picked it up, and a voice said, “May I speak to Ron Stallworth?”

“Hi. My name is Ken O’dell. I’m the local organizer of the Colorado Springs chapter of the KKK. I received your note in the mail.”

Oh hell, where do I go from here? I thought.

“Okay,” I said, stalling for time as I grabbed a pen and legal pad.

“I read what you wrote, and I’m wondering why you would like to join our cause?”

Why do I want to join the Klan? A question I truly thought I never would have been asked, and I felt like saying, “Well, I want to get as much information as possible from you, Ken, so I can destroy the Klan and everything it stands for.” But I didn’t say that. Instead I took a deep breath and thought about what someone wanting to join the Klan would actually say.

I knew from being called a nigger many times in my life, from small confrontations in everyday life that escalated to an ugly rhetoric, to being on the job when I was giving someone a ticket or making an arrest, that when a white person would say that to me, the whole dynamic would change. By saying “nigger” he’d let me know he thought he was inherently better than me. That word was a way of claiming some false power. That is the language of hate, and now, having to pretend to be a white supremacist, I knew to use that language in reverse.

“Well, I hate niggers, Jews, Mexicans, spics, chinks, and anyone else that does not have pure white Aryan blood in their veins,” I said, and with those words I knew my undercover investigation had begun.

I continued, “My sister was recently involved with a nigger and every time I think about him putting his filthy black hands on her pure white body I get disgusted and sick to my stomach. I want to join the Klan so I can stop future abuse of the white race.”

Ken sure warmed up at that point, his voice easing into something sweet and friendly. He identified himself as a Fort Carson soldier who lived in Security with his wife.

“And what exactly does the Klan plan on doing?” I asked, pen at the ready.

“We have a lot of plans. With the Christmas holiday approaching we’re planning a ‘White Christmas’ for needy white families. No niggers need apply,” Ken said.

They were seeking monetary donations through the P.O. box, and The Organization, as he referred to it, not the Klan, maintained a bank account under the name of “White People, Org” at a bank in Security.

“We’re also planning four cross burnings. To announce our presence. We don’t know exactly when yet, but that’s what we want to do.” My pen paused over my notes as I heard this. Four burnings here in Colorado Springs? Terrorism, plain and simple.

Ken went on to explain that membership in The Organization would cost ten dollars for the remainder of the year, thirty dollars for the next year, and I would have to buy my own hood and robe.

“When can you meet?” he asked.

“Well then, how about next Thursday night? The Kwik Inn, do you know it?”

“Seven o’clock. There’ll be a tall, skinny, hippie-looking white guy with a Fu Manchu mustache, smoking a cigar outside. He’ll meet you, then if it all looks okay, he’ll take you to me,” said Ken.

“Okay,” I said, scribbling furiously in my pad.

“How will we recognize you?” Ken asked.

The same question I had been asking myself since I picked up the phone. How would I, a black cop, go undercover with white supremacists? I immediately thought of Chuck, an undercover narcotics cop I work with who was about my height and build.

“I’m about five foot nine, a hundred eighty pounds. I have dark hair and a beard,” I said.

“Okay then. Nice talking to you, Ron. You’re just the kind of person we’re looking for. Looking forward to meeting you.” And with that, the line went dead.

I took a deep breath and thought, What the fuck am I going to do now?

Listen to Chapter 1 of Black Klansman!