Learn about Invisible Blood, a brand new crime fiction anthology and comment below for a chance to win a copy!

“If I could make a living writing short stories I would”

That was Jeffery Deaver earlier this week at The Mysterious Bookshop at the launch event for Invisible Blood, a brand new anthology series edited by crime fiction legend Maxim Jakubowski.

Cards on the table, I hadn’t heard of Maxim until a copy of Invisible Blood came across my desk, and even then, it was the other names on the cover—Lee Child, Jeffery Deaver, etc.—that stood out the most. It was an A-List anthology, and I wondered how Maxim could pull it all together.

And then I went down the Wikipedia rabbit hole. Maxim has worked in book publishing for many years, and he eventually left the industry to open the Murder One bookshop, the U.K.’s first specialist crime and mystery bookstore. He’s edited numerous anthologies across various genres including crime fiction, science fiction, and erotica. (He is strongly rumored to be one of the authors behind the bestselling erotic author Vina Jackson, but this has never been confirmed.) Maxim has also served as the Chair of the Arthur C. Clarke Award and is now chair and judge for the Crime Writers’ Association Debut John Creasey Dagger award. All that is to say, the dude is legit.

Joining Jeffery Deaver at the event was Lee Child and Jason Starr, and the three of them sat with Maxim as he described the genesis of the anthology and made us laugh with his Getting the Gang Together stories and a few false starts. (Mark Billingham declined because he’s writing an opera. Laurence Block—Larry to Maxim—had literally just retired.)

Something unusual about Invisible Blood is that there is no overarching theme throughout the stories, and Child wasted no time in chiding Maxim for this, saying that made coming up with his story difficult. (His story “Smile” stars Reacher and is set in Heathrow.)

Deaver, the professed short story lover, assumed the title was the theme and came up with “Connecting the Dots”—a story about a case with a blood-based invisible ink.

And Starr, just like Deaver, took the literal path and concocted a crime story without any blood in “The Ghost of Williamsburg.”

As Maxim quipped, clearly no one is reading his emails.

But in addition to discussing the anthology, the gang did what everyone in the audience was hoping for—they shot the shit.

For a while, they discussed short, creative fiction. Between the various anthologies they’ve taken part in, the short stories they co-written with other authors (See ITW’s Faceoff anthology), and the continuous novels they’ve authored a single chapter for, handing the baton to someone else to continue the story. And all the while, it was clear just how much these writers loved writing. From Starr’s enthusiastic descriptions of the comics he’s working on (Red Border) to Deaver’s just-released novel (The Never Game) and Child’s romanticized admission that Maxim was the editor who publishes his very first short story, “James Penney’s New Identity” featuring a pre-Killing Floor Jack Reacher.

And perhaps that’s the thread I’ve been trying to grab at here: Maxim. He’s been publishing crime fiction and other work for 60+ years. He’s worked with some of the very best writers out there, and he’s written his own critically acclaimed books. As Lee Child put it, “he’s a living legend.”

And I’ll end things here the same Lee Child ended things at the event. As you may have heard, Reacher is headed for the television courtesy of Amazon Prime, and unlike the films where Child didn’t have much say over casting decisions (cough Tom Cruise cough), he’s retained the final say in casting this time around per his contact and, to quote Child, “we’re gonna cast the biggest motherfucker out there.” 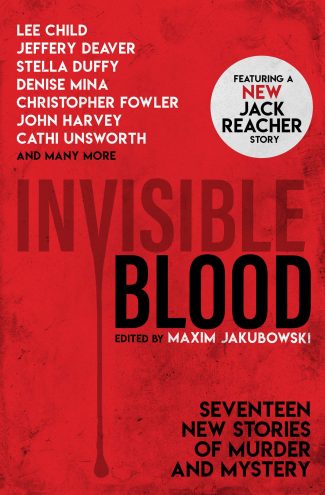 Open the files on an anthology of seventeen new crime stories to probe the brutal and complex hearts of criminals, and unravel the strangest of mysteries. Watch as a secretive group of intelligence community officers trace Jack Reacher through Heathrow in Lee Child’s “Smile”. In Mary Hoffman’s “Fallen Woman”, a journalist on the trail of a secretive drug lord gets caught up in the violent suicide of a young woman in Siena. And in Jeffery Deaver’s “Connecting the Dots”, detectives follow the trail of clues in the brutal killing of a homeless man, wherever it may lead… Invisible Blood is a gripping collection exploring the compulsions of the criminal mind.

Comment below for a chance to win a copy of Invisible Blood!

Invisible Blood Comment Sweepstakes: NO PURCHASE NECESSARY TO ENTER OR WIN.  A purchase does not improve your chances of winning.  Sweepstakes open to legal residents of 50 United States, D.C., and Canada (excluding Quebec), who are 18 years or older as of the date of entry.  To enter, complete the “Post a Comment” entry at http://www.criminalelement.com/big-names-short-stories/ beginning at 1:300 p.m. Eastern Time (ET) July 26, 2019. Sweepstakes ends at 1:29 p.m. ET August 9, 2019. Void outside the United States and Canada and where prohibited by law. Please see full details and official rules here. Sponsor: Macmillan, 120 Broadway, New York, NY 10271.