Check out Paula Munier's favorite canine mysteries, then make sure you're signed in and comment below for a chance to win a copy of her first Mercy and Elvis Mystery, A Borrowing of Bones! 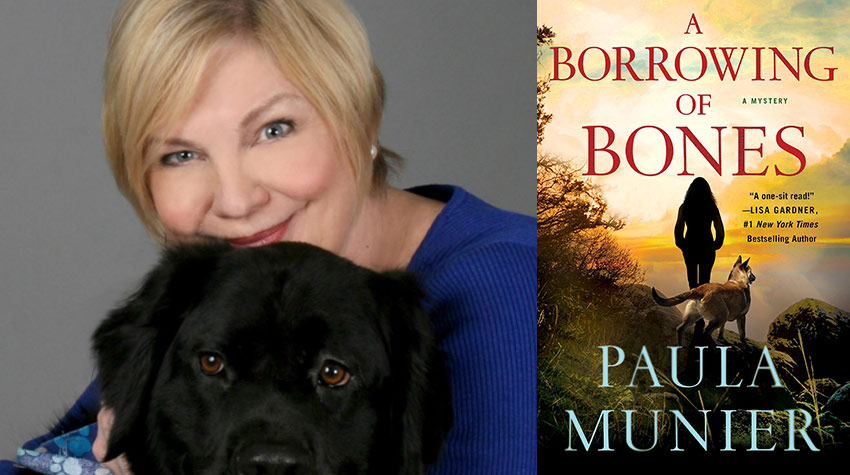 As anyone who’s ever had a dog can tell you, dogs are great characters—in life and in mysteries. In my debut mystery, A Borrowing of Bones, I write about Elvis, a handsome Malinois who served in Afghanistan as a bomb-sniffing dog until his handler got killed and he got PTSD, and Susie Bear, a Newfoundland-retriever rescue from Alabama who specializes in search-and-rescue. They team up with their humans—former M.P. Mercy Carr and Game Warden Troy Warner—to solve mysteries in the Vermont wilderness.

Four-legged characters are, I confess, my favorites. Not just write about but to read about.

Here’s a (way too short) list of mysteries with great canine characters that have inspired me and my work: 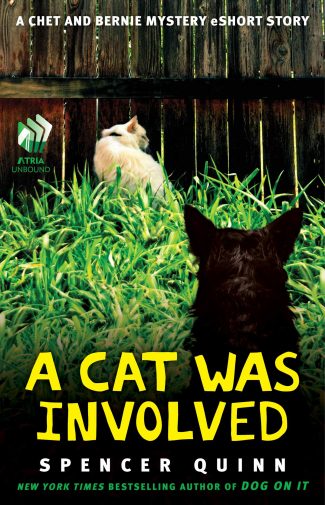 The Chet and Bernie Series

We’re starting with my pal Peter Abrahams, aka Spencer Quinn, because his was the first series I read in which the dog played such a key role in solving the mystery. The wise and wildly entertaining Chet is a K-9 school failure (A Cat Was Involved) who teams up with hapless P.I. Bernie to solve crimes in Southern California. Chet is the brains, and Bernie, well, Bernie is the human.

Not only are these first-rate mysteries, Peter pulls off the near-impossible: writing from Chet’s point of view with an aplomb the writer in me can’t help but admire. It’s very difficult to write from the point of view of a dog or a cat and make it seem authentic and real and moving—I won’t even try—but Chet the Canine as the narrator is pitch—or should I say pooch—perfect.

In my fabulous day job as a literary agent, I always tell aspiring writers, “If you can write a story from the point of view of a dog or a cat and pull it off, I will sign you today.” And I mean it.

Fair warning: This series is a gateway drug to K-9 mysteries. I picked up my first Chet and Bernie mystery at the New England Crime Bake several years ago, and Peter signed it for me. I pulled it out on one snowy winter evening and fell in love at first bark. I proceeded to pray for snow, and this being New England, the weather gods smiled on me, and I spent the rest of that cold, white winter in front of the fire reading every single book in the series. As if that weren’t enough, once I’d finished them all, I needed more. I was not just hooked on Chet, I was hooked on crime series featuring dogs. You will be too. The good news, there are tons to choose from. Which leads me to the rest of my (woefully inadequate) list. 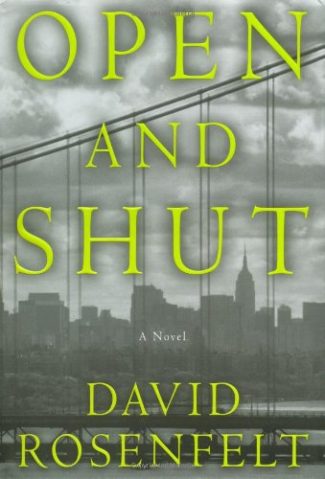 I always thought that all the fuss over golden retrievers was just that: fuss. There are a lot of great dogs in the world—and they aren’t all goldens. That was my thinking. Then, I read the first book in David Rosenfelt’s Andy Carpenter series, Open and Shut.

In it, he writes: “There is nothing like a golden retriever. I know, I know it’s a big planet with a lot of wonderful things, but golden retrievers are the absolute best. Mine is named Tara.”

And I thought: Here we go again. But by the time I finished the book, I was in love with Tara—and by extension all golden retrievers—too.

I started jonesing for a golden myself. That’s when we rescued our big shaggy black Bear, a Newfoundland-retriever mix. Our vet—who has three goldens at last count—swears that Bear is all golden in terms of personality. He is, admittedly, The Happiest Dog in the World (and the inspiration for Susie Bear in A Borrowing of Bones).

Still, I believe that there’s a golden retriever rescue—or another golden mix rescue—in my near future. I can feel it.

I can’t guarantee that reading this popular-for-a-reason series will get you your first golden. But do know that it is a distinct possibility.

Note: David and his wife started the Tara Foundation in honor of “the greatest golden retriever the world has ever known.” They’ve rescued more than 4000 dogs. Enough said.

Margaret Mizushima is a real cowgirl who grew up herding cattle on ranches in Texas and Colorado, where she now lives with her veterinarian husband. This alone is enough to make me wild with envy.

But it gets worse: She’s also the author of the acclaimed Timber Creek K-9 Mystery police procedurals featuring Deputy Mattie Lu Cobb and her splendid K-9 partner, Robo. With the help of local veterinarian Cole Walker, Mattie and Robo solve the crimes that threaten to tear apart their beautiful and tightknit Colorado Rockies hometown.

She had me at Rockies and Robo—and her compelling heroine Mattie completes this powerful triad. Not to mention a handsome vet. Seriously. You’ll love this series.

Of course, I’d read several Elvis Cole and Joe Pike novels and was already a big Robert Crais fan. Then, a fellow #dogsandbooks lover recommended Suspect, and I fell in love with Robert Crais’s work all over again.

Suspect features Scott James, an LAPD cop whose last case left him near dead physically and emotionally, and Maggie, a bomb-sniffing German shepherd with PTSD who’s in no better shape than her new partner. They are each other’s last chance—and Crais ensures that making good on this last chance brings both dog and man to the brink and back. It’s a great read—and it sets the bar very high for those of us writing K-9 mystery. 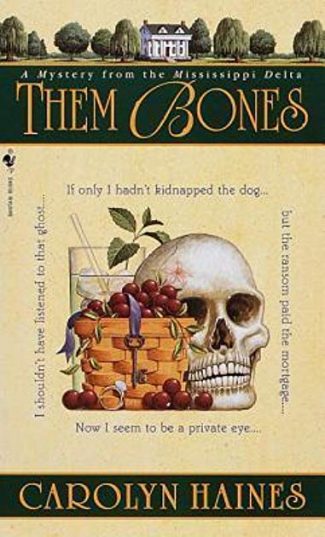 Sarah Booth Delaney and her partner, Tinkie Bellcase Richmond, run the Delany Detective Agency, but to hear the dogs tell it, they do all the real work. The dogs are Sarah’s yodeling, 75-pound hound, Sweetie Pie, and Tinkie’s four-pound Yorkie, Chablis. Sweetie Pie and Chablis are just the noisiest glories of this swell cozy series, which features all the charm and eccentricity of the Deep South, the requisite murder and mayhem, and a resident ghost. What’s not to like?

Not only is Carolyn a fabulous writer, but she is also a fabulous human. All of the dogs and cats in the South would agree. She really walks the talk—running a small animal rescue farm (Good Fortune Farm Refuge) in addition to writing about a million books a year.

This is why I must forgive her for beating me to all of the best titles with the word “bones” in them.

Take a visual tour of Carolyn Haines’s latest, A Gift of Bones, with GIFnotes!

Sergeant Rex: The Unbreakable Bond Between a Marine and His Military Working Dog

This is the true story of Sergeant Rex, the celebrated bomb-sniffing dog who saved so many lives in Iraq. I was inspired to write the Mercy and Elvis series by dogs like Sergeant Rex. I had the privilege and pleasure of meeting some of these dogs and their handlers at thriller writer Leo Maloney’s fundraiser for Mission K-9 Rescue, an organization devoted to rescuing and finding forever homes for these dogs. I came home and wrote the first scene of A Borrowing of Bones.

A Good Man with a Dog: A Game Warden’s 25 Years in the Maine Woods

This is one of my clients’ books—a fabulous memoir about one of the first game wardens to train dogs for law enforcement in New England. Roger and his amazing dogs take you on missions from the deep woods of Maine to the aftermath of Hurricane Katrina. You’ll never look at working dogs in the same way again.

For those of you who are thinking, “What about cats,” I’ll leave you with a little lagniappe, a trio of swell cat mystery writers: Carolyn Haines (I told you she writes a million books a year), Clea Simon, and Rita Mae Brown.

Because, of course, there are cats in my house and in my mysteries as well. I’m thinking about getting a horse…

Comment below for a chance to win a copy of A Borrowing of Bones by Paula Munier!

A Borrowing of Bones Comment Sweepstakes: NO PURCHASE NECESSARY TO ENTER OR WIN.  A purchase does not improve your chances of winning.  Sweepstakes open to legal residents of 50 United States, D.C., and Canada (excluding Quebec), who are 18 years or older as of the date of entry.  To enter, complete the “Post a Comment” entry at https://www.criminalelement.com/best-in-show-the-top-mysteries-featuring-canine-characters-comment-sweepstakes beginning at 1:00 p.m. Eastern Time (ET) September 27, 2018. Sweepstakes ends at 12:59 p.m. ET October 9, 2018. Void outside the United States and Canada and where prohibited by law. Please see full details and official rules here. Sponsor: Macmillan, 175 Fifth Ave., New York, NY 10010.

Paula Munier is the author of the bestselling Plot Perfect, The Writer’s Guide to Beginnings, Writing with Quiet Hands, and Fixing Freddie: A True Story of a Boy, a Mom, and a Very, Very Bad Beagle. She was inspired to write A Borrowing of Bones by the hero working dogs she met through MissionK9Rescue, her own Newfoundland retriever mix rescue Bear, and a lifelong passion for crime fiction. She lives in New England with her family, Bear, and a torbie tabby named Ursula.