Behind the Veil of Rural Life: Setting a Mystery Series in a Small Town

Read Susan Oleksiw's take on setting a mystery series in a small town, then make sure you're signed in and comment below for a chance to win a copy of her first Pioneer Valley Mystery, Below the Tree Line! 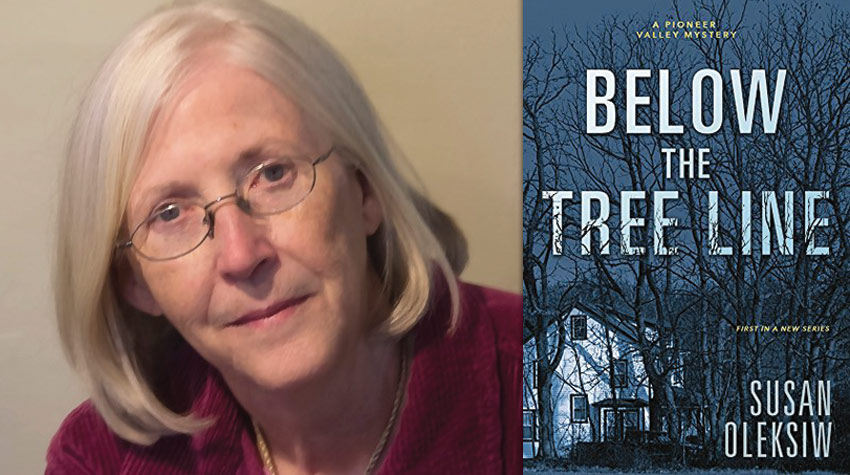 The first mysteries I read were those set in small towns, which convinced me this was the perfect location for a murder. The apparent disadvantages of this setting turn out to be advantages in storytelling—a known geographical area, a limited set of suspects, and a protagonist of any profession or livelihood.

Farming is one of the most dangerous occupations, and any farm or farm store carries enough equipment and material to wipe out half the state. But a rural setting also includes both shops and municipal government—small though it is—as well as large spaces such as forests and fields and bodies of water where people can hide. New England is still home to individuals who live unknown in the woods, able to survive without going to the hardware store every week. In addition, the changing New England seasons—beautiful as they are—bring a variety of physical challenges. Without the infrastructure built into cities and suburban areas, a rural community can be crippled by heavy weather, taking all the available resources and challenging individuals living farther out from the town center.

The limited number of suspects is also an asset. From the outside, residents of a small town may appear dull and all the same, willing to live where nothing ever happens. But the first rule of journalism is that every person has a story, and getting that story out of them is the job of the investigative reporter—or the mystery writer. In a small town, everyone may know your name, but that doesn’t mean everyone knows your secrets. Except, everyone fears that one person might know. One careless word, one misunderstood step, can set into motion an act that will upend stable relationships and long-established reputations, forcing characters to act according to their underlying weaknesses and fears.

The changes in the larger world also show up, in smaller numbers, in rural America. With young people following the well-worn path out of the village to the big city, newcomers willing to work on farms, in small industries, or anywhere else are needed and welcome. Each rural area has its smaller community of recent immigrants who landed where the bus line ended or followed the advice of a resettlement agency. They give New England towns a contemporary link to the larger world.

This is the world the sleuth knows well. When a murder occurs, she may know or be related to the people under suspicion and perhaps even recognize links to the quietly tucked-away history of earlier years. But she is equally open to suspicion by the authorities. This gives an edge to everything she does and everyone she talks to. The protagonist can begin with the assumption that the murderer is likely someone he or she knows, but this could also be the bias she has to overcome before she gets at the truth.

One of the most interesting aspects of a murder is uncovering the motive. Even in the most outrageous, complex crimes, the motive is often local and personal, and uncovering this, getting beneath the obvious, is the real challenge. To do so, the sleuth must look beyond the carefully crafted codes of social behavior that govern the smallest community as well as the interaction among social groups.

But the best part of writing about small towns are the quirky people. In suburban areas and cities, residents are more likely to have their rough edges smoothed out. Not so in small towns and rural areas. Beneath the superficial similarities among residents are people living out some of the most unexpected private lives. A foster mother manages a dairy farm while her husband recovers from a heart attack, and she looks strong enough to take on a gang of bikers by herself—which is good because the local biking club passes her place on weekend runs and she can ride with the best of them. Farther out, hidden in the woods, lives an old woman, the last of the swamp Yankees. She will shoot anything that “worried her pigs,” including purebred dogs that escape their owner’s leash. No one has ever persuaded the police to confront her on this issue, though the town has a leash law.

The phrase “small town” may conjure up an image of tidy homes with well-behaved families in a sleepy community, but that’s an illusion. These are enclaves rich with history, unusual personalities, and layered stories just waiting to be revealed to the reader. With my core group of residents in West Woodbury, my protagonist Felicity O’Brien—healer and farmer, heir to her multi-generational farm—opens the barn door to adventure in the Pioneer Valley.

Comment below for a chance to win a copy of Below the Tree Line by Susan Oleksiw!

Below the Tree Line Comment Sweepstakes: NO PURCHASE NECESSARY TO ENTER OR WIN.  A purchase does not improve your chances of winning.  Sweepstakes open to legal residents of 50 United States, D.C., and Canada (excluding Quebec), who are 18 years or older as of the date of entry.  To enter, complete the “Post a Comment” entry at https://www.criminalelement.com/behind-the-veil-of-rural-life-setting-a-mystery-series-in-a-small-town-comment-sweepstakes beginning at 1:00 p.m. Eastern Time (ET) September 3, 2018. Sweepstakes ends at 12:59 p.m. ET September 11, 2018. Void outside the United States and Canada and where prohibited by law. Please see full details and official rules here. Sponsor: Macmillan, 175 Fifth Ave., New York, NY 10010.

Susan Oleksiw is the author of the Mellingham mystery series and the Anita Ray mystery series. Beyond the Treeline, her first installment in A Pioneer Valley Mystery series, debuts on September 8 from Midnight Ink. Born and raised in New England, Susan Oleksiw has long been fascinated by the traditional New Englander and the way of life found there. She is the co-founder of Level Best Books, which publishes an annual anthology of the best New England crime fiction. Her writing has appeared in Alfred Hitchcock Mystery, and she has served as coeditor for The Oxford Companion to Crime and Mystery Writing. Before she entered into a life of crime, Susan studied at the University of Pennsylvania, where she received a PhD in Asian studies. She has also spent time living in India, and her fondness for the country lives on through her passion for photography.