May 28, 2021
In the first in a new series, author Dale Brown introduces U.S. Air Force intelligence officer Nick Flynn as he hunts Russian commandos in the mountains of Alaska to prevent a potential nuclear holocaust. Read an excerpt below! 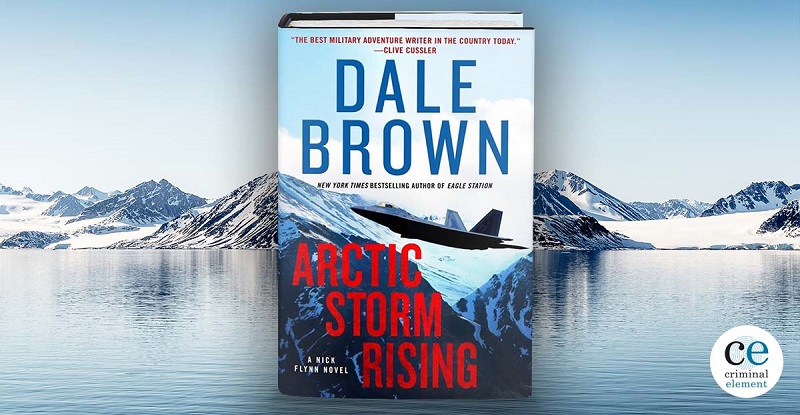 Seated behind the HH-60’s cockpit and facing outward, Captain Nicholas Flynn felt his stomach floating as the helicopter raced downslope at more than one hundred and sixty knots. Through the cabin window in front of him, he caught blurred glimpses of massive boulders zipping past not more than a few feet below. That only increased the sensation of uncontrolled speed. He swallowed hard and crossed his arms over the straps holding him in his seat. “Oh, what fun,” he muttered, realizing too late he was on the intercom.

“What’s the matter, Nick?” the cheerful voice of the pilot, Captain Scott “FX” Dykstra asked through his headset. “Don’t like flying?”

Through gritted teeth, Flynn shot back, “Flying, I don’t mind. I just prefer my sky with a little less ground in it.”

Dykstra chuckled. “See, there’s where I gotta disagree with you.” The helicopter banked hard left and then right again, as he steered around a massive ledge of basalt jutting out at an angle from the softer soils around it. “Clouds are pretty and all, but high altitude’s a happy hunting ground for hostile interceptors and missiles. Down here just above the dirt is the sweet spot, where any bad guys only get a couple of seconds to react before we scoot on past and out of sight.”

“Oh, I understand the theory,” Flynn said, bracing himself as the HH-60 slewed sharply upward again and then leveled out a hundred feet off the desert floor. “It’s the practice that scares the shit out of me.”

A new voice came on the intercom circuit. This one belonged to Technical Sergeant Carl Zalewski, one of the two PJs, or pararescue jumpers, riding back here with him in the Jolly Green II cabin. “Please tell me you’re not being literal, sir. Our guys just washed this bird before we took off from El Minya. If we bring it back all dirty, they’re gonna be seriously upset.”

That drew a quick laugh from the rest of Wizard 11’s crew. There were five of them all told: Dykstra, his copilot Captain Kate “Ghost” Kasper, their flight engineer, Staff Sergeant Bill Wade, Zalewski, and the other PJ, Technical Sergeant Mike Camarillo.

“Geez, Nick, if you’re gonna freak out, I might have to assign Wade to monitor you in between engine checks,” Dykstra joked. “It’ll give him something to do besides wail and gnash his teeth about his missing guns.”

Wizard 11’s pilots, Dykstra and Kasper, were combat-tested Veterans of several daring missions to extract wounded U.S. and allied personnel under fire and deep in hostile territory. Bill Wade was along to keep the helicopter’s engines, hydraulic systems, and other equipment operating smoothly during an extraordinarily long and grueling flight.

And as pararescuemen, Zalewski and Camarillo were graduates of one of the toughest training programs in the entire U.S. military—nearly two years’ worth of rigorous courses covering emergency medicine, parachuting, mountaineering, combat diving, wilderness survival, tactics, helicopter operations, and half a dozen other valuable specializations. If there were injured survivors still trapped in the wreckage of the C-130J turboprop, their expertise would be crucial to extracting the wounded and getting them back to base alive.

Nick Flynn’s own role in the mission was less clearly defined. After graduating from college with an ROTC scholarship, he’d undergone intensive training to qualify as a Special Tactics Officer in the Air Force Special Operations Command—earning the right to a scarlet beret, similar to the maroon beret worn by the rest of Wizard 11’s crew. But there the similarities ended. Thanks to an ear for languages and a gift for quick study, he’d been quietly recruited into Air Force intelligence operations shortly after completing the STO course. He’d come to Egypt with the squadron as one of its combat rescue officers. But that was just a cover story. His real mission was to gather HUMINT, human intelligence, on the Egyptian and other foreign nationals involved in the exercises—focusing on those who might someday be recruited as potential intelligence sources. Or conversely, on those who might be open to working with terrorists or other groups hostile to U.S. interests.

Ostensibly, his language skills were the reason he’d been assigned to this flight. None of the others in the helicopter crew knew enough Arabic to liaise with locals if that proved necessary. But the lieutenant colonel in charge of the 64th had his own motives in putting Flynn aboard. “You’re a spook, Nick,” he’d said quietly. “And whatever’s actually going on out there is really fucking spooky. Right now, no one higher up the chain of command will tell me what the hell one of our C-130’s was doing off on its own so deep in Libya. All I’m getting is static about how I don’t ‘need to know.’ Well, that’s bullshit. So there’s no damn way I’m sending my folks out on a limb without a specially trained pair of eyes and ears along to ride herd on this situation. Which is where you come in.”

Flynn couldn’t disagree with that line of reasoning. More than a decade after the brutal civil war that ended Colonel Muammar Gaddafi’s authoritarian rule, Libya was still a cauldron of rival armed factions. There was no real central government, only fluctuating coalitions of regional groups, tribal militias, and die-hard Islamists. Chaos and conflict were the stuff of everyday life throughout most of the fractured country. That was especially true in the sparsely populated far south, hundreds of miles from Libya’s more densely inhabited coastal strip along the Mediterranean. All of which made the region the very last place you’d expect an unarmed U.S. Air Force cargo plane to be operating.

Reflexively, he patted the M4A1 carbine slung from his tactical body armor. Whatever they found at the crash site, this sure wasn’t going to be another boring day spent schmoozing Egyptian, Saudi, Iraqi, and other foreign officers over endless cups of tea.

A soft ping through his headset signaled an update from the helicopter’s navigation computer. From her position in the cockpit’s left-hand seat, Kate Kasper relayed the new data as it appeared on one of her big multifunction display panels. “Heads-up, Wizkids. We’re about eight minutes out from the estimated crash site. Check your gear and stand by.”

Flynn took a quick pass through the accessory pouches attached to his body armor. Extra magazines for his carbine and Glock 19 sidearm. Check. His Panasonic TOUGHBOOK tablet field computer was ready to go with a full battery. So were his pocket laser range finder and multiband tactical radio. He was set.

“Two minutes,” Kasper called. “Radar’s picking up objects on the ground about six miles out, at our twelve o’clock.”

“I don’t see any smoke,” Dykstra commented matter-of-factly. “Any fires must have burnt out by now.”

Flynn leaned back in his seat, craning his head sharply to look through the helicopter’s forward cockpit canopy. With all the heat haze, it was difficult to make out many details. But there was definitely a blackened scar stretching across the orangish desert sand. At one end of the scar, he could see a big, crumpled gray cylinder partially buried nose-first in a large dune. A debris field of torn and bent pieces of blackened metal—scorched wing panels, twisted propellers, and shattered engine mounts—stretched away for hundreds of feet on both sides of the wreck.

Dykstra whistled softly. “Looks like that Herky Bird slammed in almost horizontally. The wings ripped off, but the fuselage seems mostly intact.” He tweaked the cyclic, pedals, and collective to reduce their airspeed as the Jolly Green II swung through a gentle, level turn to come in behind the downed C-130.

Abruptly, as they came out of the turn, Flynn spotted a twin-turbine helicopter, a Russian manufactured M-17 medium transport, sitting parked on the sand not more than a hundred yards from the Super Hercules’ torn fuselage. Oddly, its desert camouflage paint scheme showed no obvious national markings or other identifiers. Several Western-looking men in civilian clothing were visible around the helicopter and the C-130 wreckage. Some carried a mix of small arms and wore military-grade body armor.

“Son of a bitch,” Kasper muttered. “We’ve got company.” 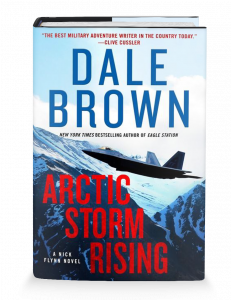 After a CIA covert mission goes badly awry, U.S. Air Force intelligence officer Nicholas Flynn is exiled to guard a remote radar post along Alaska’s Arctic frontier. This dead-end assignment is designed to put his career permanently on ice, but Flynn’s not the type to fade quietly into obscurity…

As winter storms pound Alaska and northern Canada, Russian aircraft begin penetrating deep into friendly airspace. Are these rehearsals for a possible first strike, using Russia’s new long-range stealth cruise missiles? Or is some other motive driving the Kremlin to take ever-increasing risks along the hostile Arctic frontier separating two of the world’s great powers?

When an American F-22 collides with one of the Russian interlopers, things go south fast—in seconds, missiles are fired. There are no survivors. Despite horrific weather, Flynn and his security team are ordered to parachute into the area in a desperate bid to reach the crash sites ahead of the Russians. It’s now obvious that the Pentagon and CIA are withholding vital information, but Flynn and his men have no choice but to make the dangerous jump.

Soon they’re caught in a deadly game of hide-and-seek with Spetsnaz commandos operating covertly on American soil. It seems that the F-22s and their Russian counterparts aren’t the first aircraft to have gone missing in these desolate mountains. The Kremlin is hunting for the first prototype of its new stealth bomber—which vanished on what was supposed to be a test flight…while loaded with nuclear-armed stealth cruise missiles.

As Russia and the U.S. square off on the brink of all-out-war, it’s up to Nick to find the missing bomber…and prevent a potential nuclear holocaust.