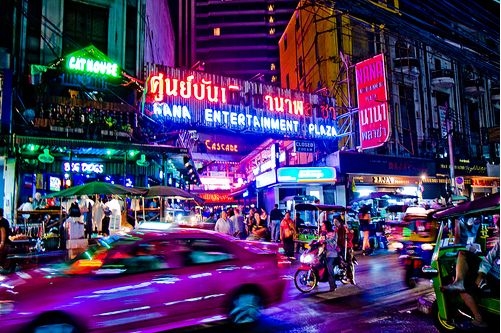 I am especially fond of John Burdett’s Bangkok mysteries. The setting is just so interesting and the characters are written with such unique voices that they are a true armchair trip.

Sonchai Jitpleecheep might be the only honest cop in Thailand. But you have to measure that by local standards. He is a half-caste. His mother was a prostitute who is now a madam. His father is unknown, but thought to be an American army officer. His mother has had long term “relationships” with men, as their paid wife, and Sonchai has lived in Europe and the U.S. This all gives him a very unique perspective. He understands the Western point of view perhaps more than some of his colleagues, and he gets assigned cases that involve Westerners. Yet, he is a Buddhist, and provides us as readers a lot of insight into Thai culture, both sacred and profane.

Thai Buddhism often incorporates folk religion and superstitions, so ghosts, reincarnation and other supernatural elements are abound. Sonchai even believes that his son is a reincarnated friend. Much of the violence and sexuality are interpreted by his spirituality, and the criminal motivations are often made clear in this way. We see things with the morality and ethics of a different culture.

While the mysteries may not be anything new, the characters and settings feel very fresh. I don’t know why, but drugs, prostitutes and killings read like something completely different when they are set in culture of Thailand and filtered through Sonchai’s kindness and dry wit. In fact, in many cases, drugs and prostitution are treated as fairly commonplace and just part of daily life (and not in a bad way). Sonchai’s mother and the girls who work for her are written with respect and humor. His mother is, in fact, a pretty shrewd businesswoman, opening her brothel when her looks faded a bit, and then finds a unique marketing angle by naming it the Old Man’s Club and caters to the more geriatric sex tourist.

The first in the series is Bangkok 8, and it concerns the murder of a U.S. army officer by snakes that are hopped up on meth. This leads to a jade smuggling ring and deeper mysteries. The second novel, Bangkok Tattoo, has Sonchai’s love, an employee of the Old Man’s Club, charged with skinning one of her clients. The third book has Sonchai haunted by an old lover’s ghost, a lover who was killed in a snuff film. And the fourth, the weakest in the series, involves cannibalism. We have seen these themes played out in Western mysteries (Thomas Harris alone covers these plots!) but there is often a more unusual motivation to the murders in these John Burdett novels.

I recommend them to anyone who is interested in the exotic. I know it seems as if you need a stong stomach to read these, but I don’t feel the violence or sex is too overt. Present, yes, but not shown in every descriptive detail. Could you even imagine living with a brain disorder that affected your ability to recognize faces from one another? It's called “prosopagnosia,” and it's as scary as it is hard to say. Lance Hawvermale drew on this disorder as inspiration for his upcoming thriller, Face Blind. Lance was kind enough to take some time out… The Tamarind Seed by international bestselling author Evelyn Anthony was made into a 1974 movie starring Julie Andrews, and is now finally hitting the e-shelves as an ebook. In this suspenseful thriller of Cold War espionage, UN assistant Judith Farrow becomes embroiled in an international plot when she’s just trying to take some time off…