A Driving Tour of Midwestern Mysteries

January 18, 2017
With so many mysteries set in big cities, Kristen Lepionka spreads the love to the Midwest, outlining some of the best mysteries in the region! 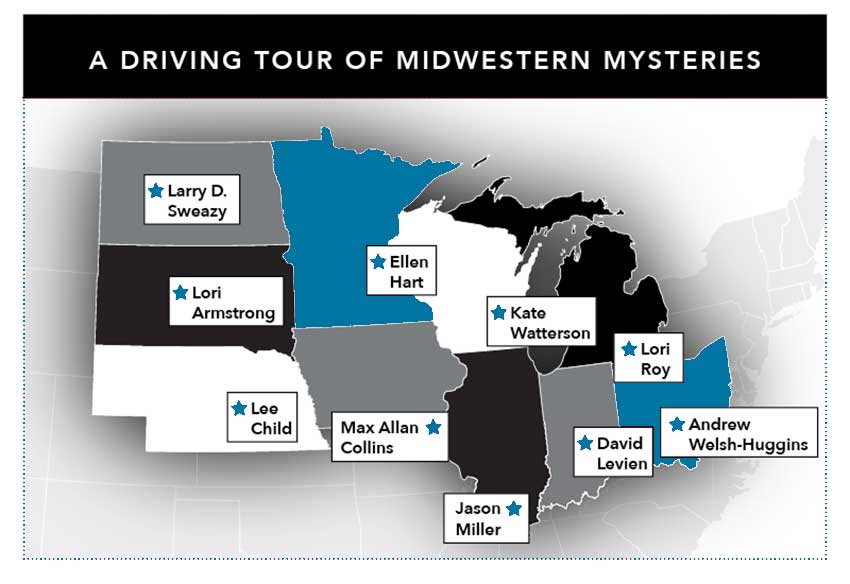 To a detective character from a big city like New York or Los Angeles, the Midwest might look like one big flyover zone. But to plenty of mystery writers (myself included), the Midwest looks like home—and a good setting for a crime novel. We have plenty of cynicism to counteract that apple-cheeked, earnest idea of Midwestern values, and wild imaginations besides. Here is a selection of mysteries set in each of the ten states that officially comprise the Midwest, at least according to the census bureau. The geographic region, that is, not the mysteries. I don’t know if the census bureau likes mysteries, but I hope they do.

My pick here is Andrew Welsh-Huggins’s series set in Columbus, starring Andy Hayes, a disgraced former Ohio State footballer turned private eye. OSU football is a big deal here, and Welsh-Huggins works that into the fabric of the story in a cool way. Check out Fourth Down and Out for Andy’s first case.

The Motor City is a common setting for mysteries—masters like Elmore Leonard and Loren D. Estleman have penned novels set here. But you can check out another side of Detroit in Lori Roy’s Until She Comes Home, a historical mystery and an unbelievably tense masterpiece about what happens when a young developmentally disabled woman disappears from her 1950s working-class neighborhood.

Known for the Indy 500 and, fittingly, the invention of the gasoline pump, Indiana is also home to David Levien’s Frank Behr series. Frank is a hulking ex-cop-turned-PI with his share of demons. His series starts with City of the Sun, where Frank tries to help the father of a missing twelve-year-old boy.

Chicago, of course, has no shortage of brilliant crime fiction set there. But for a real taste of the region, venture downstate to Little Egypt for Down Don’t Bother Me by Jason Miller, a darkly funny mystery in the heart of coal country.

Ellie MacIntosh is a Milwaukee homicide detective in Kate Watterson’s thrilling series. Check out Fractured, which combines mystery and romance elements against a frantic search for a serial killer.

Head west into Minnesota and stop in Minneapolis for a dinner date with Jane Lawless, restaurant owner and crime solver in Ellen Hart’s iconic lesbian mystery series, which is now 24 entries deep.

You’ll need the wayback machine for this one: Max Allan Collins’s Spree, the final entry in his Nolan series. There’s a lot to like here: blood, gangsters, and a heist at a Quad Cities shopping mall against the multicolored panic of Christmas shopping—a winning combination even thirty years after its release.

Lee Child’s Jack Reacher gets around—in fact, that series alone could be something of a murder tour of the Midwest (and beyond). But in Worth Dying For, Reacher stops at the rural Nebraska Apollo Inn, where he gets into a beef with the family that runs the only trucking company in the area, and therefore has a death grip on the town.

Another historical entry on our tour, See Also Murder by Larry D. Sweazy takes us to 1964 North Dakota, where Marjorie Trumaine’s work as a professional indexer results in the local sheriff consulting her for help in identifying a mysterious medallion found at a murder scene. You can feel the loneliness of the prairie in the pages of this beautifully written crime novel.

Mercy Gunderson is basically a badass. A Black Ops sniper on medical leave for a detached retina, Mercy returns to her South Dakota home when her father dies. She then becomes entangled in a criminal investigation when a body is found on her family’s property in No Mercy, the 1st installment in Lori Armstrong’s gritty series.