June 11, 2021
Taylor Adams, author of the “full-throttle thriller” (A. J. Finn) No Exit, visits the site this week to share his list of 7 propulsive novels. Taylor's new novel, Hairpin Bridge, a riveting new psychological page-turner featuring a fierce and unforgettable heroine, is out this month!

One of my favorite elements of storytelling is momentum. Reading a well-written thriller is a bit like standing in a river current—whether it’s a violent tug or a steady pull, the narrative is always moving inexorably forward and taking you along with it. With escalating stakes, white-knuckle action, or a dazzling concept explored to its fullest, here are seven of my favorite books with rocket-fueled storytelling.

One of my all-time favorites and also the first proper thriller I ever read (what a way to start!). Intensity is, to me, the gold standard of thrillers. Heroine Chyna Shepherd’s duel with a serial killer unfolds in just a few locations with a handful of characters and happens in real-time. The plot is the situation. Small-scale thrillers are often difficult to write, but when every element is executed as perfectly as it is in Intensity, this is the magnificent result: a book that demands to be read in one sitting because every single page feels dangerous. The story’s propulsion comes from its sheer immediacy.

This one is a marvel of pure speed. A retired Special Forces operator crosses paths with a young girl on the run from shadowy and ruthless forces. It’s a rollicking setup with a fun dash of sci-fi—and it quickly becomes a high-wire act of escalating action. Choreographing cat and mouse sequences with helicopters, satellites, and telepathy (!), Runner all but dares the reader to believe the characters are written into a corner, before yet another ingenious reveal keeps the story barreling forward. Most importantly in a chase thriller, the story still changes gears often, resulting in an action-packed read that never becomes tiring or numbing.

The Day Before Midnight by Stephen Hunter

Published back in 1989, this might just be my personal favorite ticking-clock story. In short: terrorists abduct a welder and break into a nuclear missile complex. The only thing between them and the launch button is a half-ton titanium block—which they’re forcing their kidnapped welder to cut through. It’s perhaps the most high-stakes hostage situation imaginable, and a wide cast of characters inside and outside of the besieged complex must work together—and use their unique talents—to prevent a nuclear Armageddon. The teamwork is what I love most about this novel, as it charges the narrative with a singular driving force. When the countdown hits the endgame, every character and subplot weaves beautifully together into a knock-down, drag-out, guns-blazing final act that I can only describe as thriller nirvana.

This novel takes a fascinating real-world phenomenon dubbed “the Mandela effect” and runs with it all that way to a mind-bending apocalypse like no other—unless the heroes can stop it. What makes this novel so propulsive is the genuine escalation in the narrative. Time travel isn’t a mere MacGuffin to service the plot, but a genuine “what-if” to be intelligently explored. How would such a breakthrough change our world? What would the ensuing global arms race look like? These fascinating ideas—and, soon, consequences—fuel a story that surprises, delights, and constantly changes shape. There’s something exhilarating to being well over halfway through a book and still having no idea where it will take you next.

An elegant subversion of the zombie genre that moves like a bullet (and, despite being published in 2019, is also a remarkably prescient commentary on COVID-19). Two female friends—one of them both pregnant and freshly-bitten—race toward an uncertain future as time runs out and the infection takes hold. Tremblay smartly touches on many of the things that would later torment us in the real world of 2020, and the personal story finds genuine terror in the loss of identity that comes with zombification. Spanning just a few hours through a wild, weird, and sometimes funny American pandemic, the two friends’ journey builds to a heartbreaking climax.

The Line That Held Us by David Joy

A beautifully-written rural noir tale that follows the catastrophic fallout of a single hunting accident and its ill-executed coverup. This novel has a powerful dread pull, as even quiet scenes are charged with a crushing sense of menace. Reminiscent of one my other favorite crime-and-consequences thrillers, Scott Smith’s A Simple Plan, the characters of The Line That Held Us are carried helplessly by this relentless chain of cause and effect to an ending that seems all but inevitable. The final hundred pages contain some of the most excruciating, sweaty-palmed suspense I’ve ever read.

What list of propulsive stories is complete without this masterclass in suspense? As a marriage implodes in spectacular fashion, Gillian Flynn weaponizes readers’ trust. Characters shapeshift before our eyes, our sympathies are tugged, teased, and tested, and halfway through, one of my favorite plot twists of all time drops like a warhead (I still remember where I was sitting when I read it). Suspense is all about uncertainty, and one of the few givens most thrillers afford their readers is a clear “good guy” to anchor with—but reveal by reveal, the two warring spouses in Gone Girl hold your empathy hostage while daring you to find out what happens next. 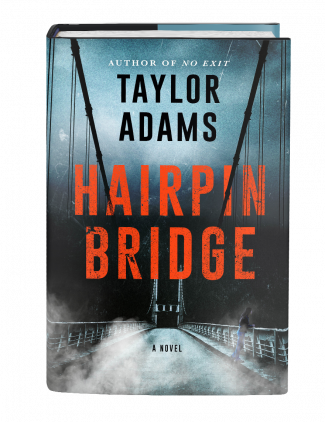 About Hairpin Bridge by Taylor Adams:

Three months ago, Lena Nguyen’s estranged twin sister, Cambry, drove to a remote bridge seventy miles outside of Missoula, Montana, and jumped two hundred feet to her death. At least, that is the official police version.

But Lena isn’t buying it.

Now she’s come to that very bridge, driving her dead twin’s car and armed with a cassette recorder, determined to find out what really happened by interviewing the highway patrolman who allegedly discovered her sister’s body.

Corporal Raymond Raycevic has agreed to meet Lena at the scene. He is sympathetic, forthright, and professional. But his story still seems a bit off. For one thing, he stopped Cambry for speeding just an hour before she supposedly leaped to her death. Then there are the sixteen attempted 911 calls from her cell phone, made in what was unfortunately a dead zone.

But perhaps most troubling of all, the state trooper is referred to by name in Cambry’s final enigmatic text to her sister: Please Forgive Me. Lena will do anything to uncover the truth. But as her twin’s final hours come into focus, Lena’s search turns into a harrowing tooth-and-nail fight for her own survival—one that will test everything she thought she knew about her sister and herself…

Taylor Adams graduated from Eastern Washington University with the Excellence in Screenwriting Award and the Edmund G. Yarwood Award. He has worked in the television industry for several years and lives in Washington state. His 2018 novel No Exit has been published in 32 languages and is currently in development as a feature film by 20th Century Studios.

A Note from Author Wendy Church I wrote Murder on the Spanish Seas during the first year of the pandemic lockdown—like everyone else, we were pretty isolated, and I was thinking about places I’d been, and places I wished I could go. The Basque Country has been on my travel list for a while, and the more…