May 4, 2020
Join Florida native Eve Calder, author of the Cookie House mysteries from St. Martin's Press for a list of fascinating lost treasure from history, that as far as we know, are still waiting to be found.

“Find my heart, and you will spy my treasure.”

Lost treasure. The phrase conjures up chests of gleaming gold, crates of sparkling gemstones, and every wish granted.

In Sugar and Vice, the discovery of a pirate skeleton—one who was rumored to have been buried with a fortune in treasure—changes life for the residents of Coral Cay. Already gearing up for the island’s annual Pirate Festival and inundated with tourists, they are beset by treasure hunters.

But while Gentleman George and his lost hoard are purely a work of fiction, the idea of missing fortunes and lost history are very real. Here are five legendary treasure troves that—as far as we know—have never been located:

Hailing from a seafaring family, William Kidd started out as a seventeenth-century privateer for hire. He married a wealthy New York widow and won a coveted commission from the English crown. But changing economics and challenging circumstances drove him to outright piracy. He was hanged in 1701.

And that’s where the legend begins. Because Captain Kidd was rumored to have buried caches of treasure up and down the East Coast and across the Caribbean. But none of his treasure spots was ever reported to be found. Not so coincidentally, pirate lore holds that many of Kidd’s treasure sites are also haunted.

This titanic Portuguese shipwrecked off the coast of Sumatra in late 1511. Headed back to Portugal, it was rumored to have been carrying a fortune in precious gems—including diamonds the size of a man’s fist.

Over the years there have been numerous tales of what really happened to the treasure—everything from it being carried off by locals or scavenged by surviving sailors to sinking forever to the bottom of the sea.

When it comes to jeweled treasure, you can’t beat a Fabergé egg. Jeweler Peter Carl Fabergé created about 50 of the intricate masterpieces—featuring gold, gems, and other sumptuous surprises—for the Russian royal family, who gave them as presents.

But after the revolution and the upheaval that followed, some of the eggs went missing. Are they hidden somewhere in a trove, or did they merely find their way into the eager hands of private collectors? No one knows.

The Tomb of Nefertiti

This Queen of Egypt (believed to be the step-mother of King Tutankhamun), may have ruled with her pharaoh Akhenaten—or perhaps as a pharaoh herself after his death. But her own tomb has yet to be found. Or has it?

Recently, with the assistance of high-resolution scans of Tut’s burial chamber, University of Arizona Egyptologist Nicholas Reeves theorized that the boy king was actually placed in one of the smaller anterooms of his stepmother’s own tomb.

And if Tut’s just the opening act, you can believe Nefertiti’s own burial chamber is spectacular.

The Lost Gold of Catahoula Creek

A nineteenth-century marauder and gang leader, James Copeland was feared all along the Gulf Coast. Known as a “land pirate” or highwayman, he and his cohorts committed a long list of violent crimes – including murder. But when he was caught, tried and hanged – in 1857 at age 34 — that was just the beginning of the story.

Supposedly while awaiting his fate, Copeland dictated his memoirs to the local sheriff. Later, the sheriff published the volume. Along with naming a number of his affiliates, Copeland allegedly recounted the time he and a crony buried three barrels of gold along  Catahoula Creek. There was even a treasure map, Copeland claimed—later lost during a gun fight. But to this day, the treasure of Catahoula Creek—if it ever existed—has never been found.

Further Reading: Excerpt of Sugar and Vice by Eve Calder 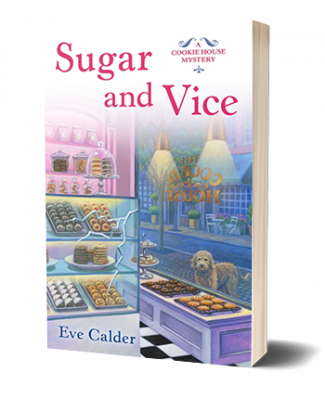 About Sugar and Vice by Eve Calder:

OUT OF THE OVEN
Lately, Kate has a lot on her dessert plate. She’s launching a cookie-of-the-day challenge in the heart of Coral Cay, providing sweet treats for the reception of the town’s handsome new veterinarian―not to mention dealing with tourists in town for a pirate festival and the surprise arrival of her former fiancé, Evan, who seems determined to win her back.

AND INTO THE FIRE
And if that’s not enough, a skeleton has been found―in the backyard behind her best friend Maxi’s floral shop. Kate knows Maxi could never hurt a fly. Maybe the remains belong to Sir George Bly, a long-dead pirate whose name has become urban legend―until now? It’s time for Kate to use every trick in the recipe book to prove Maxi’s innocence, and find the truth about the skeleton, before the last of the cookies crumble…

Eve Calder writes the Cookie House mysteries from St. Martin’s Press, featuring baker Kate McGuire and dog-about-town Oliver. Her latest cozy, A Tale of Two Cookies, just hit stores and libraries. And the audiobook is being released from Tantor Media.