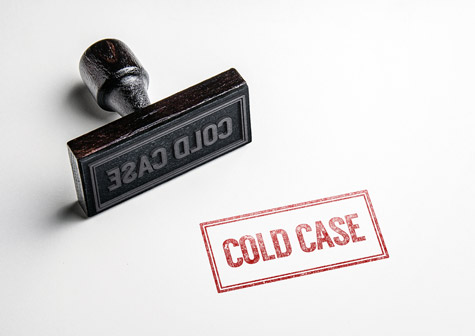 There's no such thing as the perfect crime.

Sure, some cases go unsolved. But these 5 cold cases prove that you should never give up hope. Advancements in technology, guilty consciences—you never know what might finally crack the case! During Christmastime in 1985, Minnie (83) and Ed Maurin (81) of Chehalis, WA went missing. The family reported their disappearance when they missed a planned holiday party. Their bodies were found 5 days later; they had been shot and dragged into the woods.

However, it’d be 27 years before police would make an arrest. In 2012, Rick Riffe was arrested and extradited back to WA based on new DNA evidence collected that pinned him and his brother John (who had died about a month before the arrest) to the crime. The Riffe brothers had apparently abducted the elderly couple, forced them to drive to the bank and withdraw $8,500, and then shot them in the back and dragged them into the woods. Rick Riffe was found guilty and sentenced to 103 years in prison.

In Houston, TX in 1969, Diane Maxwell Jackson was abducted from the parking lot of her job and forced to a nearby shack where she was brutally beaten, raped, and stabbed to death. While plenty of evidence was collected at the scene—including a latent print issued into evidence—none of it was enough to tie the crime to a suspect.

But Diane’s brother refused to give up. Joining the Texas Police, David Maxwell continued to review his sister’s case, eventually getting a hit on the latent print collected in 2003. 34 years after the horrific crime, James Ray Davies emerged as the prime suspect, and with a confession, he was convicted and sentenced to life in prison. In 1991, 15-year-old Jessica Keen was abducted, raped, and beaten to death with a tombstone in an Ohio cemetery. Without a clear suspect, the case went cold for 18 years. However, a big break would come thanks to a change in Ohio law that forced all violent criminals to register their DNA in a database. Marvin Lee Smith, who was currently serving prison time for two separate assaults, matched the DNA evidence from the crime scene and pleaded guilty, resulting in a sentence of 30 years to life.

In El Segundo, CA in 1957, two officers were shot and killed after stopping a man who had run a red light. Turns out, the car had been stolen from a group of young teenagers after the perp had tied them up and raped one of the girls. A partial print from the steering wheel of the stolen car and the gun used to shoot the officers were recovered, but the gun had been purchased using an alias and the case went cold for 45 years.

In 2002, as fingerprint-matching technology got better, the partial from the steering wheel hit a match for a 1956 robbery that led police to Gerald Mason—now a retired grandfather living with his family in SC. Confronted with so much evidence, Mason admitted to the crimes and was eventually convicted and sentenced to two consecutive life terms with a 7-year minimum. In St. Augustine, FL in 1985, 12-year-old Martha Jean Lambert went missing. Police found no body, no witnesses, and no strong evidence to what might have happened.

After 25 years, two detectives decided to take a crack at solving the case. They talked to neighbors, friends, and relatives, but their gut told them to focus on Martha’s older brother David. When confronted as an adult (he was in his late 30s at this point), David confessed to the truth about his missing sister.

They had been arguing, and when Martha punched him, he pushed her, causing her to fall backwards, accidentally landing on a metal spike that impaled the young girl’s skull. Panicked, David buried her body and told no one for over 20 years. Her body was never found (there had been construction in the area), and due to mitigating circumstances, David was never charged with a crime.