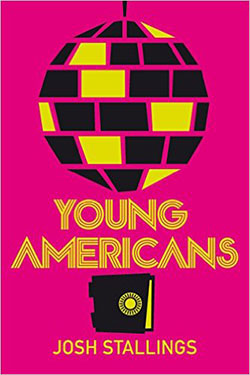 1976 New Year's Eve, San Francisco. A Firebird transports a crew of glitter kids away from the city. Forget the trunk full of cash and illegal firearms. Forget the disco heist and sea of felonies left in their wake. They are five friends happily rolling down thunder road with no horizon in sight. They are Young Americans.

“Breeze’s money or his weed. You got to give us one or t’other.” A bicycle chain pinned Sam to the barn’s center joist. Shadows leapt and fell with the gas bursts of the cutting torch. Sam had been filling the Firebird’s tank when they nailed her. A cut-down twelve gauge in a shaking hand had convinced her to drive to their farm. She knew these guys. Not bad men. Not real bright, but she doubted they were killers. It wasn’t until they chained her to the beam and lit the torch that she started to worry.

“Don’t make Cracker get down to scorching that pretty flesh of yours.” Sardine was a grimy pig of a man. Sweat and grease stuck his sparse hair to his skull. “Nothing? OK, Cracker, time to put in some work.”

“Wait.” Sam scrambled to make her brain fire quick enough to save herself. “Breeze, you dumb hick. He hired you to get his money back.”

“Of course Breeze hired us. So, you gonna give it up, or does Cracker get on with this here BBQ?”

“I cleared it up. Ask Breeze. He’n me, love will keep us together.” She was tap dancing so fast she was starting to quote Captain and goddamn Tennille. She didn’t have time to think. “I was you, I’d get my ass on the phone with Breeze. We’re together now, Breeze and me. He tell you that?”

“No, you’re with that Callum fella. He’s who ripped Breeze off.”

“Was with. Now it’s Breeze and me all the way.”

“Oh hell, every bitch he bones thinks they is together.”

“See this ring?” She was twisting to show her finger.

Cracker did as told. He pulled at the ring, but it wouldn’t budge, so he pulled harder. It felt like he was going to tear her finger off. Sam tried not to cry out. “It’s not coming,” Cracker said.

“Then get a hacksaw.”

“Wait!” Sam said. “Think Breeze will want you cutting up his ring?”

“Not gonna cut the ring.” Cracker spit on her finger. He realized what he’d done, gave Sam an apologetic smile.

The ring slid off. Sam mouthed ‘thank you’ to Cracker as he passed Sardine the ring. It was 18k gold. Victorian. It had belonged to Sam’s grandmother. “Careful, been in Breeze’s family forever. And he gave it to me. That sound like he’s mad at me?”

“A ring, hmmmm? Now that’s a bitch of another color. How do I know? I mean, well, you could be laying down a bullshit trail.”

“Ask him. But first tell him what you did to me.”

Sardine furrowed his brow, struggling to think. “I didn’t do shit.”

“Because that’s how I’ll tell it. Breeze hates rapists. The pigs will eat your balls for breakfast.”

“Let me talk to Breeze, get this straight. Or call him yourself. Don’t forget to mention I’m chained to a goddamn barn post and getting splinters up my cooch.”

“You still want I should light her up?” Fire danced on Cracker’s childlike face.

“No. Not yet. No. What I want from you, what I need, is ten seconds of silence. Think! Think!” Sardine started pounding his own forehead with the palm of his hand.

“Wha, what about the rape thing? You didn’t rape her did you, Sardine?”

“What? You haven’t left my side. Been like a third tit since we snatched her, right?”

“Then when exactly would I have raped this bitch?”

Cracker was trying to puzzle this out.

Sam worked her arms straining against the chain. It cut into her wrists. She knew sooner or later these boys would melt down.

Blood was running down Sam’s wrists, but one hand was free. The chain hung loose, still attached to her left hand. She looped it once over her knuckles and watched Sardine walk out. Cracker turned around, looking her over. “Never did get to see you danceup to Rapunzel’s.”

“I bet you was good. Kinda hope I don’t have to fire you up.” He was moving in on her, the torch in his hand hissing. “Don’t be afraid. Like you said, Breeze will straighten this out.” He looked from the torch, up to her. “You ain’t gonna’ tell them lies about rape and all.”

She mumbled a response. He leaned in. The chain took him in the temple and almost popped his eye out of its socket. She stepped into the second blow, this time using her chain-knuckled fist to break his nose. He was howling, blood smearing his face. His upper lip quivered as he swung the torch at her. Flame singed her spikes as she leapt back. Working the wound, she swung the chain again, hitting the growing hematoma over his temple. His eyebrow burst. The blood blinded him. Reaching to clear the blood, he took off his eyebrows with the torch. He squealed and dropped it. The dry hay around him exploded to life.

Sam was out and gone before Sardine cleared the farmhouse’s front porch. The Firebird spat up a rooster tail of gravel and dust as she bounced away. In the rearview mirror she saw Sardine grabbing a garden hose and spraying his brother’s burning shirt. Hitting asphalt, she slid sideways until the T/A radials hooked up and she was gone into the night.

One hundred feet past the Humboldt County line was a liquor store/gas station. She did not buy skunk weed from the kid selling it out of his wizard-painted van. She did make a phone call.

“Where you calling from? I don’t hear flames and moaning, so it looks like I’m going to have to send you to hell myself.”

“Hey, I know it means shit and all, but I had no idea that dick was planning to take you down.”

“Your vouch, your debt. Don’t play dumb. Cash, grass or ass, and as fine as your big ass is, it ain’t worth no twenty grand.”

Twenty grand. He could have said a million, wouldn’t be any easier to get. “What happened to the boys you sent with him, why aren’t they on the hook?”

“You see any plan where I don’t end up dead?”

“Not yet. But I’m ruminating my ass off. I like you girl, fact. But I let this pass, every hick with a gun and some balls will think he can take me down. They will come at me hard if I don’t make an example out of you.”

“Breeze, we are both fucked here.”

“You, little girl, you are fucked.”

“Twenty large, plus five for the barn. Due, um let’s see, hmmm,

“Or die trying. Look, call me in two days, I may have a gig that

Josh Stallings is the author of Anthony Award nominated memoir, All The Wild Children, and the multiple award winning Moses McGuire crime novels. Young Americans a ‘70 heist novel will be out November 2015. His short fiction has appeared in Beat To A Pulp, Protectors Anthology 1 and 2, Blood and Tacos, Crime Factory, Shotgun Honey and more. He lives in Los Angeles with his wife Erika, two dogs and cat named Riddle.