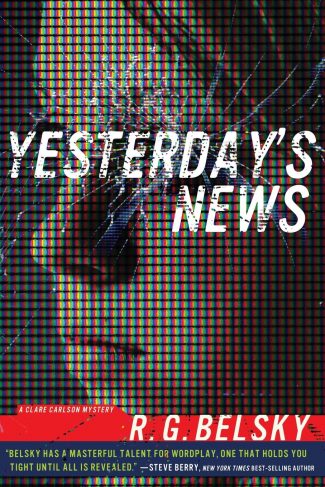 Yesterday’s News is about a legendary missing-child cold case—and a journalist obsessed with finding out the answers to what really happened.

When 11-year-old Lucy Devlin disappeared on her way to school more than a decade ago, it became one of the most famous missing child cases in history. The story turned reporter Clare Carlson into a media superstar overnight. Clare broke exclusive after exclusive. She had unprecedented access to the Devlin family as she wrote about the heartbreaking search for their young daughter. She later won a Pulitzer Prize for her extraordinary coverage of the case.

Now Clare once again plunges back into this sensational story. With new evidence, new victims, and new suspects―too many suspects. Everyone from members of a motorcycle gang to a prominent politician running for a US Senate seat seems to have secrets they’re hiding about what really might have happened to Lucy Devlin. But Clare has her own secrets. And, in order to untangle the truth about Lucy Devlin, she must finally confront her own torturous past.

THE WISDOM ACCORDING TO CLARE

I always tell the same story to the new reporters on their first day.

It goes like this: Two guys are sitting in a bar bragging about their sexual exploits. As they get drunker and drunker, the conversation becomes more outrageous about how far they’d be willing to go. Would you ever have sex with an animal, one of them asks? Of course not, the other guy replies angrily. What if someone paid you $50 to do it with a dog? That’s ridiculous, he says. How about $500? Same answer. Okay, the first guy says to him, would you have sex with a dog for $5,000? The other guy thinks about that for a while, then asks: “What breed?”

The point here is that once you ask the question “what breed?” you’ve already crossed over a very important line and can never go back.

It’s based, I suppose, on the famous old Winston Churchill story. They say Churchill was seated at a dinner party next to a very elegant and beautiful lady. During the meal, he turned to her and asked if she’d be willing to have sex with him if he gave her $1 million. The woman laughed and said sure. Then he asked if she’d have sex with him for $25. “Of course not, what do you think I am?” the indignant woman replied. To which Churchill told her, “Madame, we’ve already established what you are. Now we’re just haggling over the price.”

This is a crucial concept in the news business where I work. Because there is no gray area for a journalist when it comes to honesty and integrity and moral standards. You can’t be just a little bit immoral or a little bit dishonest or a little bit corrupt. There is no compromise possible here.

Sometimes I tell a variation of the dog story.

I call it the Woodstein Maneuver.

The idea is to come up with a new scenario for the Watergate scandal. To speculate on what might have happened if Bob Woodward and Carl Bernstein (“Woodstein!” in the Robert Redford-Dustin Hoffman movie) had not written their stories which led to Richard Nixon’s ouster, but instead gotten hush money to cover up the scandal. What if Nixon had paid them to make it all go away?

I ask a new reporter to put themselves in Woodward and Bernstein’s place and think about what they would do if offered such a bribe.

Most of them immediately say they would never take money under any circumstances to compromise a story. I’m not sure if they do because they really mean this or simply say it because they believe it’s the answer I want to hear. A few laughingly say they’d go for the money, but I’m not sure I believe them either. I figure they’re just trying to be outrageous or different.

Only a few reporters ask the key question.

The “what breed?” question.

“How much money?” they want to know.

Those are the ones I worry about the most.

“It’s the fifteenth anniversary of the Lucy Devlin disappearance next week,” Maggie

Lang said. “Little 11-year-old girl leaves for school and just vanishes into thin air. It’s the ultimate missing kid cold case. We should do a story for the anniversary.”

“Lucy Devlin is old news,” I told her.

“The girl’s never been found, Clare.”

“And after a while people just stopped caring about her.”

“Well, you sure did all right with it. You won a damn Pulitzer.”

Maggie Lang was my assignment editor at the TV station where I work as a news executive these days. She was a bundle of media energy – young, smart, ambitious, outspoken and sometimes a bit reckless. I liked Maggie, but she scared me too. Maybe because she reminded me of someone I used to know. Myself when I was her age.

Back then, I was Clare Carlson, award winning reporter for a New York City newspaper that doesn’t exist anymore. When the paper went out of business, I moved on to a new career as a TV reporter. I wasn’t so successful at that. They said I came across as too intense on the air, too grating, too unlikeable to the viewers. So they offered me a job in management. I was never quite sure I followed the logic of that, but I just went with the flow. I started out as an assignment editor, moved up to producer and then was named news director for Channel 10 News here in New York City. It turned I really like telling other people what to do instead of doing it myself. I’ve always been a bitch, I guess, now I just get paid for being one.

Maggie looked over now at the Pulitzer Prize certificate I still keep prominently on my desk at Channel. 10. Hey, you win a Pulitzer – you flaunt it.

“You helped make Lucy Devlin the most famous missing child story in New York City history, Clare,” she said. “Maybe the most famous anywhere. Imagine if we could somehow find her alive after all this time…”

“C’mon, you know she’s dead as well as I do. Why else would she never have turned up anywhere?

“Okay, you’re probably right. She is dead. And we’ll never find the body or catch who did it or know anything for sure about what happened to her.”

“So what’s our story then?”

“Believe me, I covered all the angles on this story a long time ago.”

“Anne Devlin, Lucy’s mother, is telling people she has some new evidence about the case,” Maggie said.

“Anne Devlin always claims she has some evidence. The poor woman has been obsessed about finding answers about her daughter for years. I mean it’s understandable, I guess, given all the pain and anguish and uncertainty she’s gone through. But none of her so-called evidence ever goes anywhere.”

“Doesn’t matter. We go to the mother and say we want to hear about whatever new evidence she thinks she’s come up. I tell her we want to interview her about the case for the anniversary. That maybe someone will see it and give cops some new information. It’ll be great TV. And that video -– the heart-broken mom still pleading for someone to help her find out what happened to her daughter 15 years ago – would go viral on social media.”

She was right. It was a good idea. A good TV gimmick. A good social media gimmick.

And that was my job now, whether I liked it or not. I was a long way from winning Pulitzer Prizes or writing thoughtful in-depth journalism. In television, it was all about capturing the moment. And an emotional interview like that with Lucy’s mother would definitely be a big media moment.

I looked out the window next to my desk. It was early April, and spring had finally broken in New York City. I was wearing a pale pink spring pants suit to celebrate the onset of spring. I’d bought it at Saks one bitterly cold day during the depths of winter to cheer myself up. But right now I didn’t feel very cheerful.

“Okay,” I finally said reluctantly to Maggie, “you can reach out to Anne Devlin and see if she’ll sit down for an interview with us.”

Of course. Knowing Maggie, I should have figured she’d already set it in motion before checking with me.

“Under one condition. She wants you to be the person who does the interview with her.”

“She said she’d feel more comfortable talking to you than some reporter she didn’t know.”

I sighed. Oh, I understood. Anne Devlin was holding me to a promise I made a long time ago.

It was maybe a few months after Lucy was gone. Anne had become depressed as people stopped talking about the case. The newspapers, the TV stations, even the police – they seemed to have given up and moved on to other things. She felt so alone, she said. I told her that she wasn’t alone. I told her I’d always be there for her. I made her a lot of promises that I couldn’t keep.

“Let’s make a pact,” she said, squeezing my hand on that long ago night. “If I ever find out anything, you’ll help me track Lucy down, won’t you, Clare?”

“No matter what happens or how long it takes, you can’t let people forget about her.”

“No one will ever forget about Lucy.”

I thought about that long ago conversation now as I sat in my office looking at the Pulitzer that had come out of my coverage of the Lucy Devlin story in what seemed like another lifetime ago.  That story had been my ticket to fame as a journalist. It made me a front page star; it catapulted me into the top of the New York City media world; and it was eventually responsible for the big TV executive job that I held today.

“She said you owed it to her,” Maggie said again.

I did owe her. 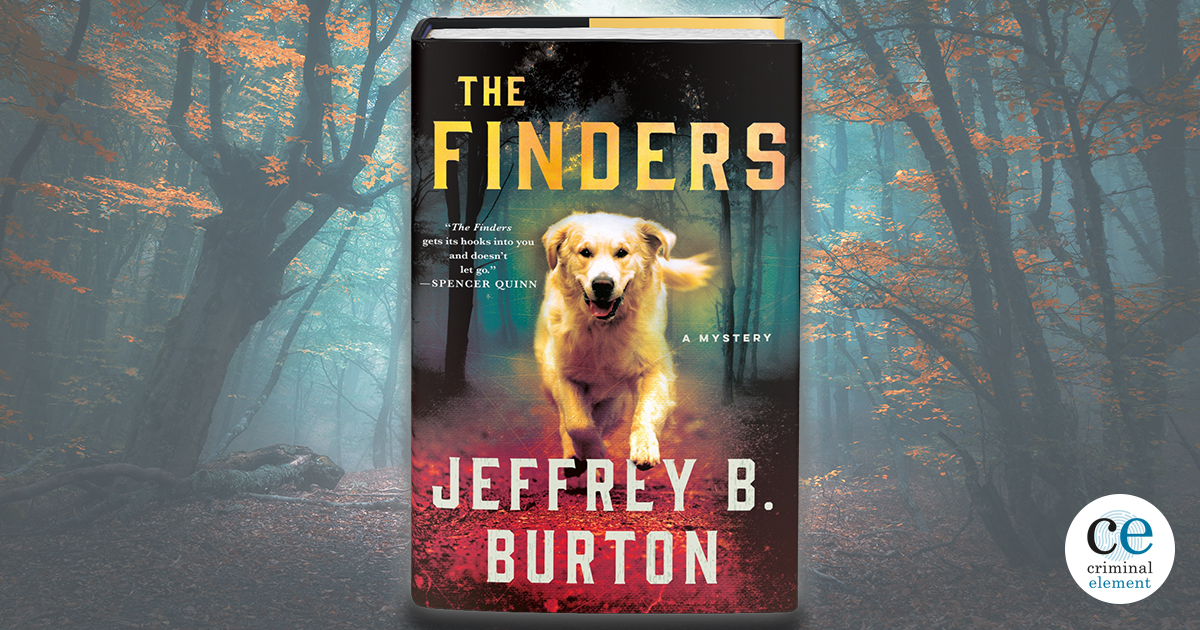 The Finders by Jeffrey B. Burton: New Excerpt

CHAPTER 1 Christine Dack was hung over. It had been a crazy Chicago wedding weekend all right. How could it not be with her old sorority mates? Sure, even though she and Sierra had been besties from back in their AOII days at dear old Ski-U-Mah, Christine hadn’t been selected as one of Sierra’s bridesmaids.…