Read about what inspired author Dietrich Kalteis to write Poughkeepsie Shuffle, then make sure you're signed in and comment below for a chance to win a copy!

When I fly into Toronto nowadays, I’m amazed at all the changes—the urban expansion and taller buildings springing up along the 401 and the Gardner, with roadways around the city expanding to extra lanes, some that didn’t exist at all when I lived there. It’s still a great city, and I guess that’s progress for you. But in a way, it’s sad to see places like Honest Ed’s being ripped away to make way for progress. Places like Bargain Harold’s, Becker’s, Mothers, and Eddie Shack Donuts are all a thing of the past.

Toronto, the way I remember it, is mostly memories now, and maybe some of those have faded a bit since growing up there. Those days at Sunnyside Beach, walking along the Boardwalk, feeding ducks at High Park or getting whiplash on the Wild Mouse at the CNE. There were red rockets on the streets and hippies in Yorkville. You could take a trip around the world at Kensington Market, catch a hockey game at the Gardens, and see the Jays win one at Exhibition stadium. We had the World’s Biggest Bookstore and the Boom Boom Room and the Gasworks. The Horseshoe and the El Mocambo and Larry’s Hideaway.

There were nights cruising Yonge Street, the head shops and street vendors, watching all the people walking up and down with their long hair in the ‘70s and big hair in the ‘80s. Many hours were spent browsing the record bins for the latest vinyl LPs at Sam the Record Man’s or A&A a couple doors up the block. There were concerts at Massey Hall, cheap beer at the Brunswick House, and good music upstairs at Albert’s Hall or over at the Elmo. You could get on the Sam McBride and sail to the Island to catch the Mariposa Folk Festival.

Ontario Place opened in the early ‘70s, the CN Tower in ’76, and I recall those drives home from work along Lakeshore or the Gardner, catching glimpses of it all going up. And ’78 brought the opening of Canada’s Wonderland—everybody back then thinking it was located in the middle of nowhere. Then, a decade or so later came the SkyDome and a new home for the Jays.

The meatpacking plants started to give way to gentrification, and the rail lines that once lined the land below Front Street started disappearing, all of it giving way to the housing bubble. The city was feeling modern, leaving behind its industrial heritage.

These are some of the memories that helped set the stage for Poughkeepsie Shuffle, letting me weave in those sights and sounds and bring back a grittier but character-filled Toronto, the way I remember it in the mid-80s, back when nobody knew what a condo was.

Across the lake from Niagara and Buffalo, the city has easy access to the U.S., making it the perfect setting for a story revolving around gun smuggling. What sparked the idea was an article I read about a gunrunning ring that operated between Upstate New York and Ontario and was eventually taken down by the OPP working alongside several U.S. law enforcement agencies. Another element that worked into the story was the increasing gang violence that was being reported back then.

So, along with my memories, some news archives, and a considerable amount of research, I spun the story of Jeff Nichols, an ex-inmate of the infamous Don Jail. Once dubbed the palace for prisoners, the Don’s reputation slid steadily downhill, eventually contributing to its closure in ’77. But the east wing remained in operation as The Toronto Jail until 2013, retaining the name of the Don Jail.

After getting his release, Jeff tries to rekindle a relationship with his ex, Ann Ryan, making his way in the world by taking a job at a used car lot in the Junction. But it soon proves to be not enough to keep them afloat. So, when the lure of easy money comes along, he gets himself mixed up in a gun-smuggling ring, bringing guns across the border. Jeff’s a likable character, but he’s also the kind of guy who refuses to let the lessons of past mistakes get in the way of a good score.

Comment below for a chance to win a copy of Poughkeepsie Shuffle by Dietrich Kalteis!

Poughkeepsie Shuffle Comment Sweepstakes: NO PURCHASE NECESSARY TO ENTER OR WIN.  A purchase does not improve your chances of winning.  Sweepstakes open to legal residents of 50 United States, D.C., and Canada (excluding Quebec), who are 18 years or older as of the date of entry.  To enter, complete the “Post a Comment” entry at https://www.criminalelement.com/writing-poughkeepsie-shuffle-by-dietrich-kalteis-comment-sweepstakes beginning at 12:00 p.m. Eastern Time (ET) September 11, 2018. Sweepstakes ends at 11:59 a.m. ET September 18, 2018. Void outside the United States and Canada and where prohibited by law. Please see full details and official rules here. Sponsor: Macmillan, 175 Fifth Ave., New York, NY 10010. 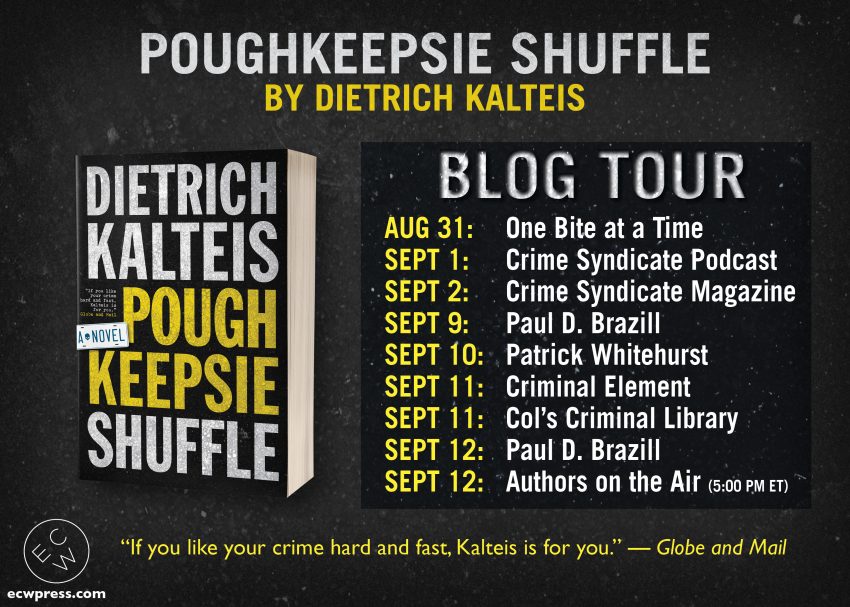