Living/Writing in a World of Crime, an essay by Archer Mayor 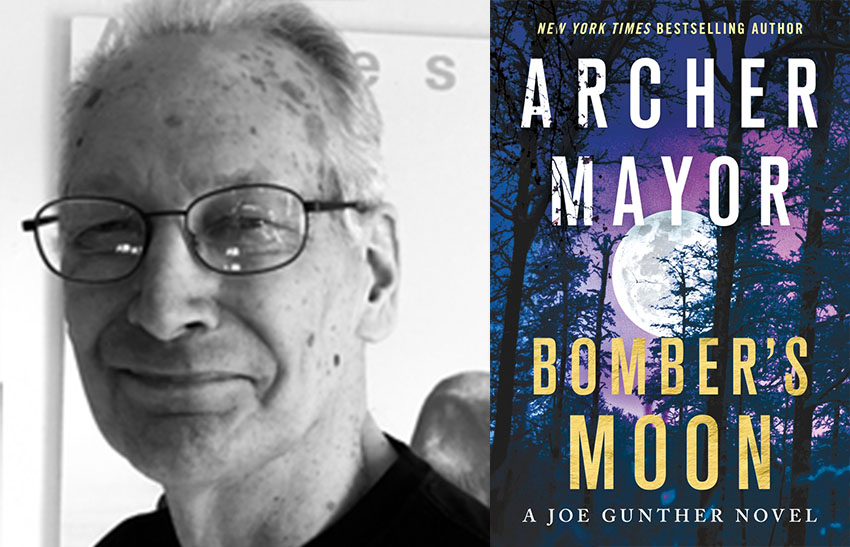 Join Archer Mayor, New York Times bestselling author of the Joe Gunther police procedural series, as he shares how writing has provided a healthy outlet to explore his experiences as an emergency responder. And sign-in/comment on the post below for a chance to win one of three advance reader copies of Bomber’s Moon, Book #30 in the Joe Gunther series which comes out in September.

I am often asked if any of my old law enforcement and/or medical examiner investigations have ever made it into my thirty Joe Gunther mysteries.

It’s a natural line of inquiry. I have been responding to emergency calls—at first as a firefighter/EMT—since before the series began in 1988.

The raw materials of crisis, loss, and stress have commingled with repeated exposure to happenstance, mean-spiritedness, and stupidity, and seeped into my soul. The fact that I’ve done all this in rural Vermont has been an ironic blessing: I am the first to acknowledge that, regardless of what I and my colleagues have seen up here, it holds no comparison to the onslaught in crowded urban environments.

Still, I have been witness to my share of suffering and sorrow. It doesn’t take a psychiatrist to suggest that such exposure to toxicity might take a toll.

In simple terms: Where do you put those feelings?

In my case, I don’t drink alcohol, or engage in extreme sports. My pets don’t suffer from excessive outbursts of anger. I don’t overeat, or speed on my motorcycle, or find solace in drug use, or even garden obsessively.

I have created a parallel universe that I visit almost every day. It is populated by confused, anxious, angry, and sometimes criminally-minded people—just like my real world—but it is also filled with Joe Gunther and his friends and colleagues. And these people—although sometimes conflicted and challenged—remain predictably and reliably thoughtful, considerate, hard-working, and just.

In their company, I replay some of the awful things I have visited in truth, place them within fictional settings, and call upon Joe and the others to process them according to their baseline standard of common decency.

I have worked side-by-side with firefighters, EMTs, police officers, ski patrollers, hospital staffers, social workers, judges, attorneys, and others of similar stripe, in all kinds of circumstances. I am hard-pressed to think of a single one of these people—despite a vast and varied spectrum of personalities, beliefs, and experience—that didn’t share the fundamental integrity to be found in my fictional characters. Were some of these people I can barely stand? Of course. Were some of their politics at odds with mine? Yes. Did a few have a moral scale and ethical scale I found wanting? Occasionally.

But they stood in the trench I was in at the time. We learned to do the job in unison. We knew enough not to probe where it wasn’t necessary for the job. We cut each other slack.

I have one character most of my readers love to hate, or hate to love. His name is Willy Kunkle, and he’s as grouchy, thin-skinned, and dismissive a man as you can imagine. He is also a tortured soul and a battered spirit who’s had the good sense to keep close the people who see beyond his ill manners. He’s also a warning for those who believe that one’s outer, social behavior is a clear lens into a person’s inner workings. I like Willy—I’ve even been accused of being Willy—precisely because of the mixed message he presents.

All of the above being said, however, I must address the opening question—has a case ever made it into a book?—by answering with a qualified “no.” Given the world I inhabit, of laws and procedures and protocols, it would be unethical—not to mention unseemly—for me to ever bring an actual investigation into one of my fictional plots.

There was one, now quite a few years ago, where my co-investigator and I (I was there wearing my medical examiner’s hat; he was police) were stumped by the cause—and therefore the manner—of this person’s death. She was middle-aged, reasonably healthy, living alone, and—our research revealed—in mourning, unhappy, and broke. Based on our experience and findings, it presented as a suicide.

An autopsy was conducted, to no avail; toxicology was run, with no telling results; the investigation was broadened, with no joy in the end. My colleague and I were officially stumped, and the case was finally listed, “Undetermined.”

That was frustrating enough. The pathos of what we’d found, however, cut deeper. Given that we’d found nothing probative, any remotely likely alternative theory began to have merit.

For the first time in my legal career, I entertained bringing this situation in for a fictional treatment.

I changed the gender, the location, the circumstances, and almost everything else about what I’d seen, and then allowed my make-believe characters to apply their magical processes to the case’s resolution. The end result—in The Second Mouse—gave me a sense of resolution that I’ve enjoyed to the present day.

People have told me that they read detective fiction to escape. I suppose, in that light, that I write it in part to restore my inner balance.

Check out an Excerpt of “Crosscut,” a new Joe Gunther short story by Archer Mayor

About Bomber’s Moon by Archer Mayor:

The murder of a small-time drug dealer snowballs into the most complex case ever faced by Joe Gunther and his VBI team.

It is said a bright and clear bomber’s moon is the best asset to finding one’s target. But beware what you wish for: What you can see at night can also see you. Often with dire consequences.

Bomber’s Moon is Archer Mayor’s latest entry in the Joe Gunther series and it may just be his best yet.

Two young women form the heart of this tale. One, an investigative reporter, the other a private investigator. Uneasy allies from completely different walks of life, they work together―around and sometimes against Joe Gunther and his VBI cops―in an attempt to connect the murders of a small-town drug dealer, a smart, engaging, fatally flawed thief, and the tangled, political, increasingly dark goings on at a prestigious prep school.

While Gunther and the VBI set about solving the two murders, Sally Kravitz and Rachel Reiling combine their talents and resources to go where the police cannot, from working undercover at Thorndike Academy, to having clandestine meetings with criminals for their insider’s knowledge of Vermont’s unexpectedly illicit underbelly.

But there is a third element at work. A malevolent force, the common link in all this death and chaos, is hard at work sowing mayhem to protect its ancient, vicious, very dark roots.

Comment below for a chance to win a copy of Bomber’s Moon by Archer Mayor!

Bomber’s Moon Comment Sweepstakes: NO PURCHASE NECESSARY TO ENTER OR WIN.  A purchase does not improve your chances of winning.  Sweepstakes open to legal residents of 50 United States, D.C., and Canada (excluding Quebec), who are 18 years or older as of the date of entry.  To enter, complete the “Post a Comment” entry at http://www.criminalelement.com/writing-in-a-world-of-crime-an-essay-by-archer-mayor-author-of-the-upcoming-bombers-moon/ beginning at 5:00 p.m. Eastern Time (ET) August 12, 2019. Sweepstakes ends at 4:59 p.m. ET August 26, 2019. Void outside the United States and Canada and where prohibited by law. Please see full details and official rules here. Sponsor: Macmillan, 120 Broadway, New York, NY 10010.