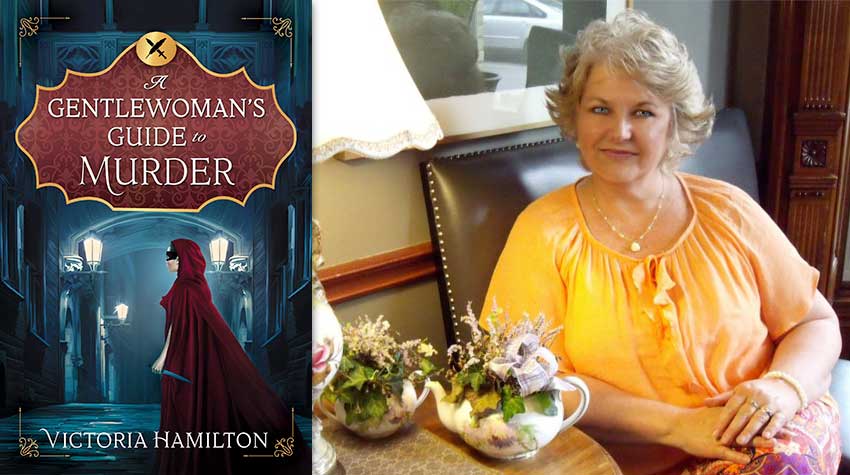 The first thing I knew about Miss Emmeline St. Germaine—main character and protagonist of my Regency-era murder mystery A Gentlewoman’s Guide to Murder (Midnight Ink, February 8th)—was that she was angry. About what? Well, a lot of things, but mostly her place in society and how it constrained her. I already knew she was going to be a difficult woman, one who strained against the harness of societal expectations. And she was going to be tough to write without making her unlikable to readers.

A Gentlewoman’s Guide to Murder is set in London, England, 1810, just on the cusp of the Regency era. I’ve written many, many Regency romances (as Donna Lea Simpson), so I know what was expected of women of the time; she was to keep her reputation pristine and marry as well as she possibly could. Unmarried ladies were not to travel alone, be alone with a man, and certainly couldn’t live alone—all of that referring back to that delicate reputation and how easily it would be bruised or shattered.

As a product of my time, I have been allowed the freedom to live as I choose; no marriage and no children but with a career I adore. How would it have felt to be hemmed in on all sides with restrictions, rules, and a society that would have considered me insane? I could have rebelled, certainly, but that path led to disgrace and even confinement in an asylum. Widows were allowed a lot more latitude, but every unmarried lady had her male “keeper,” a father, brother, or uncle who had a great deal of control over her. If she was so fortunate as to have money, he had charge of her finances. Of course, control the money and you control the woman. So every woman just toed the line, right?

Not true. Even with the potential for disastrous consequences, there were women—married and unmarried—who chose to defy convention, to speak and act out knowing the consequences.

One of the most famous of these was Mary Wollstonecraft, who while still an unmarried lady indulged in love affairs out of wedlock and bore an illegitimate child, among other “sins.” When another love affair resulted in pregnancy, she married more, it seems, for the benefit of her child than herself. After her untimely death, a perhaps too-honest biography of her by her widowed husband, William Godwin, destroyed her reputation, such as it was. She was condemned to become the model for wildly inappropriate female characters written by other more conventional female authors, Maria Edgeworth and Fanny Burney, among them. Such was the fate of one unconventional female.

A perusal of the lives of rebellious women of the late Georgian and Regency eras led me to recognize that there must have been many women who felt as Mary Wollstonecraft did: that women were held to impossible standards, expected to be perfectly devout, proper, submissive, and serene, femininity expressed as the opposite of masculinity. And there must have been some who were astute (or devious) enough to find ways to circumvent propriety, to keep their reputation and yet do as they wished much of the time.

It would take some doing, I thought, as I began to plan Emmeline’s life; it would require my heroine to have an independent fortune and the ability to access it. Also, the lady would need a companion for appearance sake, as well as a few willing connivers who would help her conceal her unconventional lifestyle.

That was how Miss Emmeline St. Germaine—prickly, independent, and determined Regency heroine—was born. As her creator, I gave her a brother, Mr. Leopold St. Germaine, as her male “keeper.” With a multitude of duties and distractions and a deep feeling that Emmeline is an unsuitable influence for his teenage daughters, he prefers that she stay at the family townhome in Chelsea, near London, which is exactly what Emmeline wanted. I gifted her with a mild-mannered companion, her cousin Fidelity; a fiercely loyal Scottish maid, Delia Gillies; and a stoic and devoted coachman, Josephs. But all cannot go smoothly, even in one’s own fictional world, so I also cursed her with a nosy butler, Birk, who may—or may not—report back on her doings to Leopold.

And so, Emmeline is ready to cause trouble, to behave, secretly, in very unladylike ways as she works to correct the injustice of her society’s treatment of women and children. Masked and cloaked, she is ready to disrupt.

I like to think there were actual Emmelines out there in the Regency era, women we’ll never know the truth about who found a way to thwart the patriarchal society in which they lived enough to do most of what they wanted and live as free as one could. I make the point in A Gentlewoman’s Guide to Murder that men, too, were restricted in their behavior, but Emmeline insisted on having the last word.

A family friend, Dr. Giles Woodforde, tells her that men must also bite their tongue and not be honest or forthright or risk losing their livelihood or offending patrons. Emmeline protests that, “It’s not the same, and you must see it. When I bite my tongue it is because to be honest would be to forfeit all respect in society, or even to be sent into exile. You would be blamed for being blunt; I would be damned as insane.”

I think many women, even today, will empathize with Emmeline, trying to walk that fine line between saying what we want and being labeled a bitch. And I don’t think Emmeline’s future will get any easier in A Gentlewoman’s’ Guide to Murder #2: Some Taste of Madness.

Victoria Hamilton is the nationally bestselling author of the Vintage Kitchen Mysteries, the Merry Muffin Mysteries, and the Teapot Collector Mysteries. In addition to her mysteries, she has written twenty regency romance novels as Amanda Cooper and Donna Lea Simpson.