I once asked forensics specialist and author D.P. Lyle what he thought was at the core of criminal behavior. His answer was that most criminals are, in one way or another, trying to save face. Six novels later, I’m still exploring that concept. What is so compelling that it drives a criminal to take someone’s life? It almost never works, so why do killers still think it might? And how does this violent act affect the families and communities of both the victim and the perpetrator? What are the hidden conflicts that come to the surface after a violent act? I’m not interested in serial killers, but in ordinary people driven to the edge.

In my first Samuel Craddock novel, A Killing at Cotton Hill, I felt sympathy for the guilty party, who was driven by desperation to maintain his standing in his world. He deserved to be caught and punished, but I wanted the reader to have some understanding of the complicated reasons for his actions.

In The Last Death of Jack Harbin, through writing about different kinds of relationships between men—brothers, close friends, and brothers-in-arms—I dealt with weighty issues in addition to murder. One was how we, as a society, treat our veterans. Another was the insularity of religious sects and how jarring it can be for those who isolate themselves to be forced to interact with the outside world.

Dead Broke in Jarrett Creek was inspired by stories of small towns going bankrupt after the banking crisis of 2008. I wondered how a town could go bankrupt. People pay taxes. What happened to the money? In the book, the mayor has lost credibility and feels as if he was not responsible for what happened to the town but was blamed anyway. Again, though, there were other themes in play: the demands of marriage, what people will do for love—as well as unrequited love. A Deadly Affair at Bobtail Ridge is a dark book about people who appear successful on the surface, but are full of fear and shame underneath.

Writers should entertain their readers, so there is humor in my books—scenes in which characters act foolishly or make funny observations. But as I look back on six novels, I realize that I am a serious writer. Yes, I write crime novels, but often the crime is less important to me than the situation surrounding it.

When I was writing The Necessary Murder of Nonie Blake, I kept going back to descriptions of the brooding atmosphere: a gothic house surrounded by barren land, sultry hot weather, and a weedy, snake-infested pond that was prime mosquito-breeding territory. The atmosphere was a metaphor for the barren, gothic family whose daughter was murdered. The setting echoed the twisted, murky depths of a family that turned its back on the outside world to protect themselves. Which brings me to my latest novel, An Unsettling Crime for Samuel Craddock—a prequel set in the early 1980s, when Craddock is a newly hired chief of police. It’s a book I had been planning to write for a couple of years to fill in Samuel Craddock’s background. I based the book on the story of a real-life murder that happened in the town that Jarrett Creek, Texas is modeled after. My idea was to have Samuel Craddock confronted with racism and drug-related crimes creeping into the small town of Jarrett Creek. I wanted to show the choices he had to make. Would he go along with casual community bigotry? Would he shy away from tackling a big crime that was not really in his job description?

In order to avoid making the story too similar to the historical one, I looked up the real-life crime. To my surprise, the man convicted of the crime back in the 90s had just been exonerated by the Innocence Project. It brought home the serious nature of the book I was planning to write. In the end, I wove police corruption and hints of police brutality into the tale of how Craddock settled into his job. I was thrilled when Publishers Weekly gave the book a starred review, with the comment, “…a timely story with resonance in the era of Black Lives Matter.” It’s satisfying to be taken seriously.

Crime fiction is a perfect vehicle for exploring serious subjects, if for no other reason than the seriousness inherent in crime itself. But truly, at the heart of every good novel there is a mystery—secrets of the heart, secrets that spring from bad decisions or bad intentions, secrets of political, social, or personal nature that affect everyone around them. In that way, John LeCarre’s novels equate with Jane Austen’s, Louse Penny’s with Don DeLillo’s. Readers read to find out the mystery of why humans are driven to behave the way they do. The best crime fiction doesn’t simply ask whodunit, but why as well.

Read an excerpt from An Unsettling Crime for Samuel Craddock!

Terry Shames is the Macavity Award-winning author of the Samuel Craddock mysteries A Killing at Cotton Hill, The Last Death of Jack Harbin, Dead Broke in Jarrett Creek, A Deadly Affair at Bobtail Ridge, and The Necessary Murder of Nonie Blake. She is the coeditor of Fire in the Hills, a book of stories, poems, and photographs about the 1991 Oakland Hills Fire. She grew up in Texas and continues to be fascinated by the convoluted loyalties and betrayals of the small town where her grandfather was the mayor. Terry is a member of the Mystery Writers of America and Sisters in Crime. 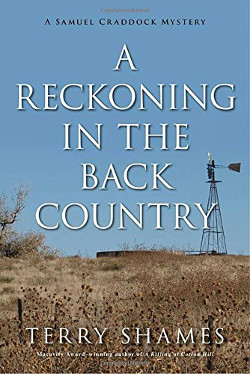 Review: A Reckoning in the Back Country by Terry Shames

A Reckoning in the Back Country by Terry Shames is the seventh book in the Samuel Craddock Mystery series, where acting Police Chief Samuel Craddock investigates the murder of a visiting physician, whose mangled body is found in the woods (available January 9, 2018). Do you remember the book that got you to fall in love…

Review: An Unsettling Crime for Samuel Craddock by Terry Shames

An Unsettling Crime for Samuel Craddock by Terry Shames is the 6th book in the Samuel Craddock Mystery series (Available January 3, 2017). When the Jarrett Creek Fire Department is called to douse a blaze on the outskirts of town, they discover a grisly scene: five black young people have been murdered. Newly elected Chief…