Why You Should Be Watching FX’s Mayans M.C.

Are you watching Mayans M.C.? If not, Dave Richards will tell you why you need to start now. 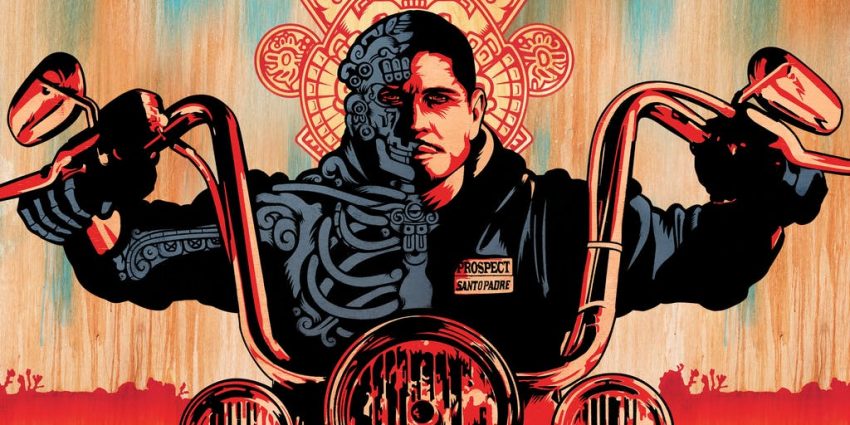 I was late to the party on Sons of Anarchy, FX’s hit series that ran from 2008-2014. I watched the pilot and wasn’t super impressed by it, and I was also wrongly under the impression that a show about a biker gang wasn’t for me. Thankfully, enough buzz built up after the first season, and I was able to catch up in time to watch the second season while it was airing. I was hooked. As the series progressed, it grew pulpier and twistier, making me love it even more. I enjoyed it so much that I followed series creator, Kurt Sutter, to his next FX project, the historical drama The Bastard Executioner. That series didn’t work for me, and after it folded, I heard Sutter was considering doing a Sons of Anarchy spinoff show about the rival motorcycle club, the Mayans. I wasn’t sure that was the way to go. It felt like Sutter and his collaborators would be revisiting the past and just playing the hits.

As it turns out, I couldn’t have been more wrong! Despite my reservations, I gave  Mayans M.C. a chance, and I couldn’t be happier that I did. After this week’s episode, we’re now halfway through the 10 episode debut season, and it’s safe to say it’s off to a much stronger start than S.O.A was at this point in its run. I’ve grown to like a lot of the lead characters on Mayans, and while it’s taken some of the formulas of its predecessor, it’s found ways to remix these tropes in new and exciting ways. And most importantly, it’s also managed to carve out its own storylines to make Mayans feel fresh. By combining elements of the drug war (At times the show feels a lot like one of Don Winslow’s great Cartel novels) and undercover stories, we’re left with a show that feels familiar, distinctly different, and fascinating all at the same time.

Like Sons of Anarchy, the central thrust of Mayans M.C. is family, both the one you’re born into and the one you find. Ezekiel “EZ” Reyes (J.D. Pardo), our central protagonist, is not much different than a character you’d find in a Shakespearean tragedy. EZ doesn’t seem like he wants to be part of this organization at all. We don’t know exactly what he’s done yet, but a series of flashbacks have shown that EZ is in the club because he accidentally shot a cop, costing him his scholarship to Stanford, the woman he loves, and several years of his freedom. The DEA offered EZ a way out by joining the motorcycle club his brother was a part of and reporting back intel on the drug cartel the club was affiliated with. So EZ is now a low level “prospect” in the Santo Padre chapter of the Mayans M.C. and uses his eidetic memory to pass along intel to his DEA handler. It’s an impressive set up that’s made even better by Pardo’s charisma and the sense of decency he brings to his character.

The only people aware of EZ’s double life are his DEA handler and the show’s most fascinating character, EZ’s dad, Felipe, played by the great Edward James Olmos. Like all the characters Olmos plays, Felipe is gravitas personified. He’s tough, loves his sons, and will do whatever he can to protect them. And as the show has progressed, we’re starting to learn that Felipe may be more capable of protecting his sons than he initially seems.

EZ’s informant status isn’t the only bit of exciting intrigue in Mayans. In the opening episode, we learn that the Santo Padre chapter of the Mayans has dual agendas. Marcus Alvarez, El Padrino (the godfather) of all the Mayans’ chapters, has tasked the club with protecting and shepherding the drug shipments of the Galindo Cartel across the border from Mexico. But there is secret cabal within the club working against that. It’s lead by EZ’s brother, Angel, who is helping a band of rebels attack and destroy the cartel so the Mayans can eventually break free from the chokehold Galindo has on them.

That twist is made even more exhilarating by the fact that we get to spend time with the rebels and see how they operate — the heroic and horrible things they do to gain vengeance on the drug cartel and to try and liberate their country from the hold the cartel has on it.

Making the drug war aspect of Mayans even more fascinating and nuanced is the fact that viewers are allowed to spend time with the Galindo cartel leadership as well. Danny Pino, formerly of Law & Order SVU, plays Miguel Galindo, a classic Michael Corleone-style mobster who is forced to take control of the family business after his father dies. He’s struggling to not let that change him and turn him more savage. It’s a battle he’s losing.

On top of all that, Mayans has a whole bunch of supporting characters and background elements that it’s just starting to flesh out. I’m particularly interested in Johnny “El Coco” Cruz (Richard Cabral), a Marine sniper turned biker whose teenage daughter just discovered that Johnny is her father and not the older brother she believed him to be. I’m also intrigued by the impoverished town of Santo Padre and its mayor who is striving to do what’s best for the town while being under the thumb of Miguel Galindo.

So, if you love fun, pulpy, compelling crime TV and you have yet to watch Mayans M.C., you need to rectify that. There’s so much good stuff fueling the current season, and great stuff that can be developed in later ones. (Right before I sat down to write this piece I happily discovered that FX had renewed Mayans M.C. for a second season.)

You don’t have to have seen Sons of Anarchy to understand or enjoy the show, though if the weekly waiting period between episodes has you going crazy, just pop on Netflix, load S.O.A., and you’re good to go. And if you were a fan of the original, even better, as there are plenty of Easter eggs that prove the two series exist in the same shared universe.