Before their film and television studios became entertainment powerhouses, Marvel Comics sold the rights to their characters to a number of different studios. Over the years, those rights have reverted back to Marvel, allowing them to introduce and incorporate a number of fan-favorite characters into their ever growing Cinematic Universe.

Last year, Marvel Cinematic Universe fans finally got their chance to meet blind-lawyer-turned-superhero, Matt Murdock, with the premiere of the gritty and gripping Daredevil series on Netflix. This week, Daredevil returns for a second season, and he's bringing with him the Punisher—making his triumphant return/debut to Marvel, after starring in other films.

So, in this piece, I'll get you ready for Daredevil Season Two by recommending some stories from the Punisher's 42-year comic history and sharing my thoughts on the previous Punisher films and one video game adaptation.

Like Wilson Fisk, the villain that Daredevil battled in his first season on Netflix, the Punisher originally was a Spider-Man antagonist. Created by writer Gerry Conway, with artists John Romita Sr. and Ross Andru, and introduced to the world in 1974's “Amazing Spider-Man” #129, the Punisher, AKA Frank Castle, was a decorated Marine and veteran of the Vietnam War. When he returned home, he witnessed his family get murdered by the mob after they witnessed an execution in New York's Central Park.

His grief turned to rage, and he decided to use his combat skills to literally declare a one-man war on crime.

I can't find anything that says the character was directly inspired by writer Don Pendleton's popular series of Executioner novels, starring Mack Bolan (another highly trained Vietnam vet seeking justice against the mob for the murder of his family), which started in 1969, but there's certainly enough similarities between the two characters to suggest perhaps an indirect inspiration. After his introduction, the Punisher would return to morally complicate the world of Spider-Man on a number of occasions. However, his most interesting and brutal rivalry came when Frank Miller had the character cross paths with Daredevil for the first time in issues #183-184 of the original volume of his series.

It's a fantastic and gritty crime story that perfectly illustrates the clash between the two heroes' motivating forces of justice and vengeance. The story is collected in an expensive, but well worth it, omnibus collection of Frank Miller and Klaus Janson's Daredevil work, a new printing of which should be available by the time you read this article.

Many writers tackled the character during that time period, but one of the most prolific was Chuck Dixon. Some of Dixon's stories are fantastic, while others I didn't care for as much. My favorite is his initial run with artist John Romita, Jr. on Punisher War Zone, which found the Marine-turned-vigilante trying to infiltrate a mob family. The collected edition of that is out of print, and unfortunately, a used copy is hard to find.

I also enjoyed the one-shot, out of print graphic novel the duo did, called Punisher/Batman Deadly Knights; a special team-up tale from Marvel and DC that found the Punisher in Gotham City, where he took on a morally outraged Dark Knight and terrorized the Joker. The mid 90s saw a decline in the character's popularity, but in 2000 a Punisher renaissance began when writer Garth Ennis and artist Steve Dillon kicked off their acclaimed run on the character. The Ennis-Dillon stories were unique in that they brought a fun, dark humor vibe to the character.

In 2004, Ennis launched a new take on the character that still contained plenty of black humor, but focused on darker, harder edged stores. The result: Punisher Max—a series for Marvel's mature readers imprint that took place in a world without superheroes, where Castle had been waging his one-man war on crime in real time, since the end of the Vietnam War.

If black humor and hardboiled action is how you like your Punisher, you can't go wrong with any of the stories by Ennis. Good places to start include: Punisher: Welcome Back Frank, a collection of Ennis and Dillon's original stories, and Punisher Max: The Complete Collection Volume 1.

Other writers continued writing Punisher Max tales after Ennis left the book, but the best one had to be Jason Aaron, who collaborated with Dillon to bring the series to a close. Their entire run is available in a pricy, but also well worth it omnibus edition.

While creators were spinning gritty crime tales over in Punisher Max, a number of others were telling tales of how the fantastic elements of the Marvel Universe impacted with the Punisher's vigilante crusade. In 2009, writer Rick Remender teamed with artist Tony Moore to introduce one of the strangest and most polarizing Punisher tales of all time—FrankenCastle, a storyline that found a murdered Punisher stitched back together into a hulking Frankenstein-style monstrosity by some supernatural monsters.

Readers either hated the storyline because they thought it was too strange or they loved the crazy, over the top fun of the book—I fell into the latter category. The storyline was full of big, weird, and imaginative visuals. If that sounds like something you would enjoy, you should definitely check out the Punisher: FrankenCastle collection. Remender brought his Punisher run to a close by resurrecting Frank Castle.

The baton was then handed off to thriller/crime novelist Greg Rucka, who kicked off a new Punisher series in 2011 with artist Marco Checchetto. The series adopted a grittier, street level approach that found Castle on the periphery of the Marvel Universe, battling an underworld gang of ex-Hydra and S.H.I.E.L.D. agents who had decided there was more money in organized crime than super espionage.

The series also introduced a unique and fascinating supporting character in the form of Rachel Cole Alves, a female Marine who was inspired by the Punisher to take up her own crusade against crime when her husband was murdered on their wedding day.

Rucka wrapped his fantastic run on the Punisher with a tale that found Castle reluctantly dragged into the center of the Marvel Universe, when the Avengers decide he needed to be stopped, once for all. What makes this series so fun is Castle knows he's out of his league, so he's forced to use every ounce of his formidable cunning to not beat, but outwit characters like Thor and Iron Man. That series is available in a collected edition titled Punisher: Enter the War Zone, and all of Rucka's fantastic run leading up to it is collected in two volumes.

The most recent Marvel Universe-set Punisher series was created by writer Nathan Edmondson and artist Mitch Gerads. It was a fun, long-form action thriller that embroiled Frank Castle in a conspiracy involving a drug cartel, a high-tech terrorist group, the Spider-Man villain known as Electro, an elite black-ops unit, and rogue elements of the U.S. Government. Watching Castle put all the pieces together was a lot of fun, and the series was full of fantastic and badass visuals—like Castle in a skull-faced balaclava mask. The series is available in three graphic novel collections.

This May, artist Steve Dillon returns to the Punisher with a new volume of the character's ongoing series that will be written by Becky Cloonan. I love Dillon's work, and I'm a huge fan of “Southern Cross,” the gritty, creator-owned sci-fi horror comic from Cloonan and artist Andy Belanger—so I'm super excited for this new series. 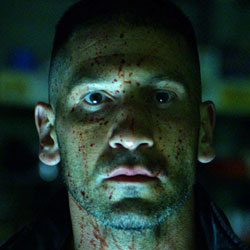 I'm also super excited to see Jon Bernthal's portrayal of Frank Castle in Season Two of Daredevil. I think he'll have a certain psychological intensity and fierceness that was missing from previous portrayals of the character. Plus, I think there's a lot of Shane Walsh, Bernthal's character from the The Walking Dead, in Frank Castle—so it's perfect casting in my opinion.

The other actors to have played the Punisher have not been bad, and neither have their films—there's just been something off about them.

*I'm not talking about Dolph Lundgren, who starred in the direct-to-video 1989 Punisher film. There were so many liberties taken in that film, I don't consider it a Punisher movie.

For me, the first Punisher film was the 2004 vehicle, starring Thomas Jane as the title character and John Travolta as the villain. It was a decent attempt at the Punisher, and it actually put him in his trademark Skull shirt (unlike the Lundgren film), but I don't think it captured the brutal and relentless nature of the character well enough.

I think Jane did a much better job in the very fun Punisher video game from 2005, where he voiced the title character in a story that mixed elements of the feature film with the Marvel Universe, including some levels straight out of Garth Ennis's early Punisher stories:

Jane was given another chance to revisit the Punisher in an unofficial, but very well done, 2012 short film titled Dirty Laundry, where Frank Castle's laundry day was interrupted by some brutal criminals. Tone wise, it's pretty hard-edge and probably the tone the original film should have struck in the first place.

Frank Castle returned to the big screen in the 2008 film Punisher War Zone, where he was played by actor Ray Stevenson. Stevenson's portrayal of the character was alright—I'm not a fan of some of the story elements, but I do think the film is underrated. Director Lexi Alexander really wanted to capture the feel and tone of the Punisher Max series, and I think she did a great job. The movie has some really nice action sequences too, and The Wire's Dominic West is great as one of the Punisher's only recurring villains—the over-the-top, heavily scarred mobster known as Jigsaw.

So, while the last two Punisher films were entertaining, they didn't quite hit the mark for me. That's why I'm excited to see what is done with the character in Season Two of Daredevil. This trailer that highlighted the Punisher suggests a perfect mix of character and tone:

If you want to see why I find the Punisher to be such a fascinating character, go check out some of the stories I suggested.

Then, come back to Criminal Element in a few days where I'll share my thoughts and perspective on the first few episodes of Daredevil Season Two, as I kick off a new installment of Binge-Worthy.