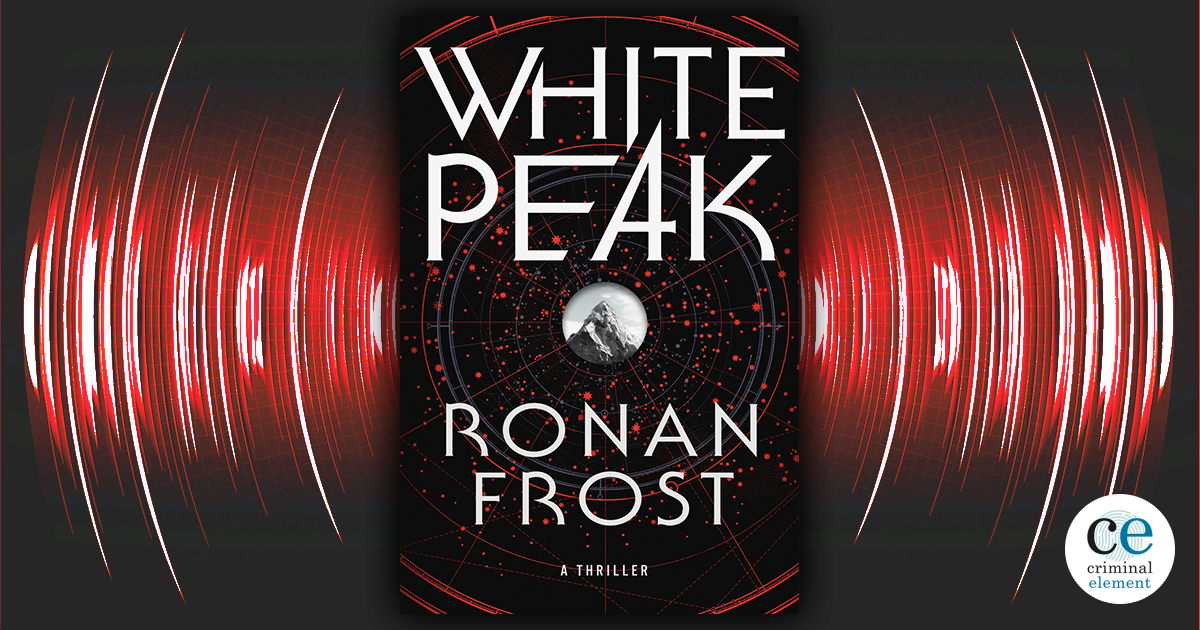 Ronan Frost’s White Peak is a fast-paced action thriller full of death-defying adventure.  Greg Rask, a dying tech billionaire, has invested millions chasing miracle cures. Now, he’s gathering a team willing to go to the ends of the earth chasing life. In an adrenalin-pumping quest through some of the most savage terrains known to man, the crew will be pushed to the limits of endurance and beyond.

Enjoy this excerpt in the format of your choice: audio or print.

The knock at the door dragged him out of the recurring nightmare.

He lay on his back looking at the ceiling, disoriented. The ceiling fan wobbled in its arc. It did nothing for the ventilation. Half a dozen red pinpricks of light dotted around the dark room could easily have been a metaphor for his life on standby.

“All right, all right, keep your hair on. I’m coming,” he called. His jeans were across the back of the couch, as was his shirt. He dressed quickly, still buttoning when he opened the door.

It was the black guy from the diner.

“We’re going to have to stop meeting like this,” Rye said. “My employer is going to need an answer.”

“Knock yourself out,” Rye said.

The man took residence in one of the room’s two armchairs. He looked like he was settling in for a child’s tea party, twice as big as the chair beneath him. He put an envelope on the table. He didn’t say anything until Rye had closed the door and sunk back down into the memory foam seat. “Okay, let’s get this over with shall we? Who’s your employer and why the fuck won’t he leave me alone?”

“My employer has asked that I repeat his offer, now that you’ve had some time to think about it: Do you deserve a second chance?”

“Look, not being funny, but why does he care? I assume it’s a he? Only a man would pull this kind of bullshit.”

“He cares because he himself was the recipient of a second chance and it is safe to say that it changed his life. Now he finds himself in a position of being able to help others. He is aware of your situation and would like to do the same for you, if you are ready to help yourself?”

“Take a look around you, what do you think?”

“What I think doesn’t come into it, Mr. McKenna.”

“So, who is this mysterious benefactor of mine?”

“I am not at liberty to say. Yet. There are certain things we need to discuss first.”

“What about you? Am I allowed to know who you are?”

“Of course. My name is Guuleed.”

“That trips off the tongue,” Rye said.

“Okay, so, for the next few minutes I’m going to call you Vic. That work for you?”

“Okay, Vic, don’t take this the wrong way, but this whole thing stinks. First a courier shows up with an enigmatic note, then you’re waiting for me outside the diner, and now you’re here. I feel like I’m being stalked. And why? Because your boss wants to change my life?”

“Perhaps it would help if I told you something about myself? I have been in this country for three years now. I am a refugee of the Somali Civil War, the Dagaal Sokeeye Soomal in my own language. I was born into war, I will almost certainly die in war when my time comes. I am resigned to this. But for now, I am here, and life is good. Before America, life was not so good. Both of my parents were murdered by the Barre regime. My three brothers died in the fighting at Mogadishu. I am the last of my line. There is no denying nature, I am a lion, my friend. There is blood on my soul that no amount of praying will cleanse. And yet, thanks to my employer, I have been given a second chance.”

“That is to say, I think you should listen to his offer.” Vic leaned forward and with two fingers pushed the envelope across the table toward Rye. “Open it.”

He did as he was told. Inside was a photograph taken from a crude low-resolution security camera. It was from the service corridors in the Sheridan Meadows mall. In the middle of the shot was a man, his features blurred with movement. He carried an as- sault rifle. Rye was intimately familiar with both the weapon and the man who had killed his wife.

“Is this supposed to mean something?” “His name is Matthew Langley.”

“I know what his name was,” he corrected the tense. Tactical Response had taken the shooter out in the process of securing the scene. He was six feet under. Rotting.

“Is,” the black man repeated. “It was decided that it was in the public interest to report that all three gunmen lost their lives in the assault on the mall. That was a lie for the media.”

“Yes, there are laws, and yet that is exactly what they did. And it is not the first time, nor will it be the last. This country hides the truth within lies, just as my homeland did. Tomorrow Lang- ley is going to be moved to a black site where he will essentially disappear forever.”

Rye shook his head. “How do you know this?”

“My employer is well connected, Mr. McKenna. It is his business to know.”

“You’ll excuse me if I don’t swallow this shit, right?”

“I will, but that doesn’t change the fact that in forty-five minutes a prisoner transport is leaving and my employer has gone to great lengths to clear the way for you to ride on that bus. It is up to you whether you are on it or not, of course, but arrangements have been made for you to spend an hour in a cell with your wife’s killer. The guards will be under the impression that you are Mar- tin Blake. You will be provided with a driver’s license and other paperwork in Blake’s name. Blake is serving seven to ten and is registered to be on a transport out before dawn, so the window is finite.”

“This is what your boss means by a second chance?”

“No, he views this as offering you closure. Your second chance would begin the moment you board the transport out of the prison facility.”

“Right, so what is this? Some sort of test of my moral compass? If I get on that bus, do I pass or fail? I mean, what kind of man turns down an offer of alone time with his wife’s murderer?” De- spite himself, Rye felt his heart rate quicken at the thought of it. “Isn’t that what you’re supposed to dream of, the chance to extract vengeance. Who do you think I am?”

The black man said nothing for a moment, seeming to mull the conundrum over. “A man in considerable pain, I think.” He put the photograph back in the envelope. “I have seen security foot- age from inside the mall. I know what he did to your wife. I have listened to your call. I have heard your last words together. I know what I would do in your place.”

“I would tear him apart with my bare hands and eat his heart while it was still hot in my fist. But then I am not a forgiving man.” Rye barked out a laugh at that. “But that is my truth. It does not have to be yours.”

“Right, you say that while at the same time offering me the chance to kill someone. . . .”

“Yes. My employer believes that this arrangement will allow you to move on with your life. All you have to do is say the word and you will be sharing a cell with Matthew Langley before sun- rise. What you do in those four walls is between you and your conscience. There will be no comebacks. You have my word on that.”

“Have we reached the point where you tell me who this mysterious employer of yours is yet?”

“No. That time, if it comes, is later. After you have made your peace with Matthew Langley.”

“Not being funny, but that’s awfully convenient. How do I know you aren’t setting me up? For all I know you could be wearing a wire.”

Vic unbuttoned his shirt, opening it on a ruin of scar tissue that made a patchwork out of his torso. It was a mess. There was no wire. He saw Rye looking and explained, “As I said, he saved me.”

“My employer is assembling a team of people with unique skill sets. He will explain more when you meet.”

“No, if you had no intention of taking his offer you would have asked me to leave by now. I suggest you clean your teeth, your breath is rancid. That won’t go down well with the warders. But be quick, it’s a thirty-minute drive to our rendezvous with the transport and we only have thirty-six minutes before it leaves.”

In another life, RONAN FROST worked for the British Ministry of Defence. During the last year of the Cold War, his main duties involved liaison with intelligence operatives working behind the Iron Curtain, and after Glasnost and Perestroika changed the geopolitical face of the Eastern Bloc he found himself working mainly with the Royal Navy during Operation Granby during the first Gulf War. After leaving, he worked alongside economic experts developing a plan for rationalization and centralization of the British Royal Navy which was presented to the House of Commons. Now retired from that career, he lives in Europe with his wife and dog, enjoying a much quieter life. White Peak is Ronan Frost's first novel.