Is there such a thing as a psychological legal thriller?

When I was a little girl, there was one thing we were not allowed to do in our house: talk during The Perry Mason Show. Seriously. When Perry Mason was on TV, my sister and I were required, if we wanted to watch it and of course we did, not to say a word. During the commercials we could ask my lawyer stepfather questions, like: What does immaterial mean? And do you think they know that Hamilton Burger sounds like hamburger?  And we yelled “objection” when our other siblings tried to steal our seats.

But when the actual show started again, back to complete silence. Reverential silence for the story.

Earl Stanley Gardiner’s riveting Perry Mason (and his courtroom colleagues) became the entryway to my love of legal thrillers. I never lost that joy:  Scott Turow and John Grisham and Michael Connelly. The incomparable John Lescroart and my hero David Ellis. Anatomy of a Murder and 12 Angry Men and Witness for the Prosecution and Compulsion and Inherit the Wind.

Is my brand new The Murder List a legal thriller? My editor asked me that, and my answer was: not exactly. Yeah, the main characters are lawyers, and it has a courtroom scene or two. And a tiny bit of jury. But mostly? It’s psychological suspense. Gaslighting. Manipulation. Deception. I suppose lawyers do that—and yet…. One early reader said it best: “If John Grisham and Lisa Scottoline had a book baby, this would be it.” Perfect.

The Murder List isn’t about the law. It’s about winning. It’s about three people who use their knowledge of the legal rules to come up with the life verdict they’re seeking: revenge, love, loyalty, and power.

Is there such a thing as a psychological legal thriller? That’s my new genre. A psychological domestic suspense that just happens to include a legal puzzle piece.

And I found some perfect cross-genre shelf mates.

This isn’t about the law, it’s about family. Take a prosecutor who understands the system and a murder that shocks a suburban town. Take an everyday loving family and the secrets some of the family members hide. And the explosive possibilities that ensue. Though William Landay’s instant classic is full of procedure and testimony and legal wrangling, this heartbreaking story is a clash between love and the law—and how someone sworn to uphold both of them must battle the demons that conflict produces.

A Time to Kill

This isn’t about the law, it’s about racism. A 10-year old black girl is raped by two white men. In a rage, her father kills them. And goes on trial for murder, represented by white lawyer Jake Brigance.  A white judge named Omar Noose denies a change of venue—leaving Jake to face an all-white jury deciding the fate of a black man who killed two white people. The Klan shows up.  Brigance, disheartened, fears for the verdict. His client tells him that as “one of the bad guys,” he has an influence that a black man won’t. Via John Grisham, Brigance gives a closing argument that is still chilling, eloquent, and so timely that its theme might be used this very minute.

This isn’t about the law, it’s about the pressures on immigrant families. And about motherhood.  When an explosion at a medical facility ends in tragedy—who is responsible? Angie Kim’s poignantly elegant structure takes us day by day through the entire murder trial—but her shifting points of view make us realize we can never get the entire picture from just one person. That behind each witness’s testimony is a roiling secret life, with dreams and fears and unspoken conflict.

To Kill a Mockingbird

This isn’t about the law, it’s about honor. Okay, and about justice, and racism, and equality. The main character is a lawyer, and a pivotal scene or two takes place in a courtroom. There’s testimony and unfair objections and a jury that’ll chill your soul. And sure, legions of students have chosen law school because they wanted to be just like Harper Lee’s Atticus Finch. But “just like Atticus” doesn’t mean knowing how to Shepardize citations—it means knowing how to be an honorable person.

This isn’t about the law, it’s about the environment. And the toxic injustice of economics. And about how David can beat Goliath. Yeah, in Susannah Grant’s screenplay, David is Julia Roberts, and that might’ve helped. But the real Erin Brockovich has been quoted as saying the movie is about 98 percent accurate—and Julia-as-Erin soldiers not only through the legal quagmire and financial obstacles set by the powerful PG&E, but also the weary defeated attitude of her lawyer-boss, all to battle for the families allegedly harmed by the toxic contamination of their water. This story proves you don’t need to be a lawyer to fight for justice.

This isn’t about the law. It’s about power. And money. How much is it worth to the Catholic Church and its mega-hospital corporation to cover up their lability for the death of a patient? Barry Reed’s chilling Boston novel takes us behind the scenes of a seamy battle to win a case by pouring money and influence into it—the sinister power of the legal machine. Though the courtroom testimony is shocking and heartbreaking, it’s the personal struggle of the hapless (and penniless) attorney Frank Galvin that make this a riveting classic.

This isn’t about the law, it’s about the right to think. When John Scopes—named Bert Cates in the play by Jerome Lawrence and Robert E. Lee and in the 1960 film—deliberately breaks the law and teaches his class about evolution, the townspeople of Dayton, Tennessee, are scandalized, outraged, and calling for Cates’ head. His trial—which in real life had Clarence Darrow and William Jennings Bryan facing off about the freedom to teach evolution—makes us contemplate freedom of speech and freedom of religion and peer pressure and the right of each person to choose their own beliefs. The screenplay is still widely read, and if you watch the movie, the appearance of Gene Kelly as H. L. Mencken is an extra treat. The stage directions set the time as “not too long ago,” but as the playwrights themselves wrote in 1951: It might have been yesterday. It could be tomorrow.

Okay, fine. So these great stories, my shelf-mates, are also about the law. And the legal system, too. And, kinda, so is The Murder List.  But if you’ve testified, “Oh, I don’t read legal thrillers,” I say: “Objection.” You do. 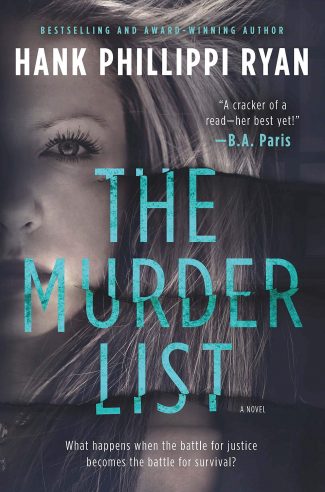 Law student Rachel North is the ultimate reliable narrator—she will tell you, without hesitation, what she knows to be true. She’s smart, she’s a hard worker, she does the right thing. She’s successfully married to a faithful and devoted husband, a lion of Boston’s defense bar. And her internship with the powerful District Attorney’s office is her ticket to a successful future.
Problem is—she’s wrong.

Rachel. Jack. Martha. Who is next on The Murder List?

And in this cat and mouse game—the battle for justice becomes a battle for survival.

Comment below for a chance to win a copy of The Murder List by Hank Phillipi Ryan!

The Murder List Comment Sweepstakes: NO PURCHASE NECESSARY TO ENTER OR WIN.  A purchase does not improve your chances of winning.  Sweepstakes open to legal residents of 50 United States, D.C., and Canada (excluding Quebec), who are 18 years or older as of the date of entry.  To enter, complete the “Post a Comment” entry at http://www.criminalelement.com/when-is-a-legal-thriller-not-a-legal-thriller/ beginning at 12:30 p.m. Eastern Time (ET) August 12, 2019. Sweepstakes ends at 12:29 p.m. ET August 26, 2019. Void outside the United States and Canada and where prohibited by law. Please see full details and official rules here. Sponsor: Macmillan, 120 Broadway, New York, NY 10010.

Hank Phillippi Ryan is the bestselling author of ten award-winning novels of suspense. National reviews have called her a "master at crafting suspenseful mysteries" and "a superb and gifted storyteller."