November 19, 2021
To celebrate the 80 year anniversary of Alfred Hitchcock’s film Suspicion, this week award-winning author Christina Lane visits the site to share her list of books tailored to the tastes of those who love the films of Hitchcock. Christina's book, Phantom Lady—a Mystery Writers of America's 2021 Edgar Allan Poe Award for Best Critical/Biographical—is available now!

One of the reasons I was compelled to write Phantom Lady: Hollywood Producer Joan Harrison, the Forgotten Woman Behind Hitchcock was to illuminate the crucial role the screenwriter-turned-producer played as a literary force in Alfred Hitchcock’s career. Through the 1930s and ’40s Joan Harrison, more than any other person, was responsible for selecting which novels, short stories, and plays would ultimately be developed into movies by the ‘Master of Suspense.’

Harrison’s predilection for women authors of gothic romance and crime fiction (e.g., Daphne du Maurier, Josephine Tey, Ethyl Lina White) obviously resonated with the director. But then, literature, in general, was an important source of inspiration to Hitchcock, judging by how many of his movies were adapted from books. Perhaps it’s no mystery, then, that many of us who can’t get enough of Hitchcock also consider ourselves avid readers.

For those who love Hitchcock films, I highly recommend these ten classic and contemporary books:

Fear in the Sunlight by Nicola Upson

Upson’s novel imagines the fortieth birthday party celebration of real-life mystery writer Josephine Tey taking place at a coastal village resort in Portmeirion, Wales, in 1936. Populated by real-life figures such as Hitchcock, his wife Alma Reville, and a host of British movie actors and crew members, the story revolves around whether Tey will sign a movie contract for A Schilling for Candles (which was adapted for the screen as Hitchcock’s Young and Innocent in 1937). Superbly researched, and featuring a detailed map of Portmeirion, Fear in the Sunlight sets gruesome violence against the elegant, romantic backdrop of British 1930s cinema circles.

Deborah Goodrich Royce follows up her debut novel Finding Mrs. Ford (2019) with this mesmerizing homage to Daphne du Maurier and Hitchcock. Ruby Falls begins with six-year-old Ruby being abandoned by her father in a Tennessee cave, then jumps forward twenty years. Ruby is now TV soap-opera star Eleanor Russell, who is curiously fired from her job on the soap and then hired as the female lead in a remake of Hitchcock’s 1940 classic Rebecca. All this insecure young woman needs now is to fall in love with an exotic stranger. Enter Orlando Montague. What unfolds is, according to Kirkus Reviews, “taut and propulsive.”

Do you find yourself longing for the young, down-to-earth Hitchcock heroine embodied by Teresa Wright in Shadow of a Doubt? The type makes a triumphant return in Sylvia Moreno-Garcia’s Mexican Gothic. Noemí Taboada, introduced as a superficial socialite, proves her indomitable will and keen judgment when her father enlists her to look in on her cousin Catalina, who may be in distress. Noemi travels far from her Mexico City home to High Place, the manor where Catalina has been installed with her new husband. In this “inspired mash-up of Jane Eyre, Ann Radcliffe’s The Mysteries of Udolpho, Dracula, Rebecca and that 1958 classic sci-fi movie, The Blob” (NPR’s Fresh Air), we root for Noemí all the way.

Didn’t we glean from Psycho that nothing good comes from peeking at strangers through peep holes? Frances Jellico is forced to learn this lesson for herself in Claire Fuller’s psychological thriller, Bitter Orange. Frances, now dying, reflects on the year 1969, the most exciting time in her life, when she moved into a dilapidated mansion to write a report on garden architecture. Living on the floor beneath her is a young, glamourous couple, Cara and Peter, on whom Frances begins spying through a peephole in her floorboards. As she is increasingly drawn into their mysterious private lives, the author reminds us that even Frances’s perceptions cannot be trusted.

Any Hitchcock fan has surely seen Vertigo (1958), and probably more than once. But have you read the book on which it was based? Sueurs Froides (Cold Sweats) — originally published in 1954 as D’Entre Les Morts (From Among the Dead) — was penned by the prolific French crime-writing duo Boileau-Narcejac, a nom de plume for Pierre Boileau and Pierre Ayraud. The latter  said that the book’s premise came to him when he thought he recognized a long-lost friend in a newsreel. Hence, it is in a newsreel that the enigmatic Madeleine re-enters the obsessed protagonist’s life halfway through Sueurs Froides. A book made for movie lovers.

A Burning by Megha Majumdar

In a shrewd twist on the Hitchcock ‘wrong man’ formula (think The 39 Steps, Saboteur, and North by Northwest), Megha Majumdar devises a multi-perspective story around Jivan, a Muslim girl from the Indian slums who finds herself accused, because of a reckless comment on Facebook, of executing a terrorist attack on a train. A Burning also follows an opportunistic gym teacher climbing the ranks of a right-wing political party and a hopeful actress who holds the key to Jivan’s freedom, but may not be willing to make the necessary sacrifice. “This is a book to relish for its details, for the caress of the writer’s gaze against the world,” according to The New York Times‘ Parul Sehgal.

As evidenced by The Paradine Case, I Confess, and The Wrong Man, Hitchcock was obsessed with crime scenes and court trials. In fact, from a young age, he was a frequent visitor to the Old Bailey, the Central Criminal Court in London, and even entertained aspirations of becoming a judge. So, it’s no stretch to imagine Hitchcock himself enjoying Kate Winkler Dawson’s American Sherlock, which paints a riveting portrait of one of America’s earliest and greatest forensic scientists, Edward Oscar Heinrich, alongside a series of true crime stories in a nested narrative, in what becomes a journey of historical detection.

Patricia Highsmith’s preoccupation with how ordinary-seeming people become murderers was one shared by Hitchcock, who in 1950 scooped up her debut novel, Strangers on a Train, and adapted it into a showcase for bravura cat-and-mouse performances by Farley Granger and Robert Walker. (The 30-year-old Highsmith was working in a comic-book store to make ends meet when she received Hitchcock’s anonymous $7,500 bid.) Published in 1955, Highsmith’s The Talented Mr. Ripley goes even further, taking readers deep into the mind of a young, charming con man-turned-serial killer, managing to make him entertaining and at times even relatable. We are left to imagine how Hitchcock might have brought The Talented Mr. Ripley to the screen; no doubt Highsmith’s dueling Ripley and Dickie would have been indelibly portrayed.

Our House by Louise Candlish

Our House delivers a shocker right out of the gate, as Fiona Lawson arrives from an out-of-town trip to find a family of strangers moving into the suburban home she and her husband, Bram, have occupied for two years. What’s more, Bram and the couple’s two young children have vanished. Fiona won’t be able to escape the trap of this nightmare until she disentangles the secrets in her troubled marriage. The surprise twist ending — no spoilers here — takes a page from the 1950s Alfred Hitchcock Presents television series, which frequently pulled the rug out from unsuspecting viewers with a final act of warped violence.

The Mystery of Mrs. Christie by Marie Benedict

When up-and-coming mystery writer Agatha Christie disappeared in December 1926, leaving behind an abandoned car hanging off a quarry’s edge, an unprecedented manhunt ensued. After eleven days, the author emerged from a health spa, claiming amnesia, and giving few clues to her whereabouts since her disappearance. Marie Benedict reconstructs these missing days, deftly cueing up the props and scenery of Christie’s literary world and delivering a brilliant, knockout ending. It’s hard to resist this missing woman tale — a hybrid of The Lady Vanishes and Foreign Correspondent — and best of all, this is a real-life adventure, featuring the person who would become the best-selling fiction writer of all time. 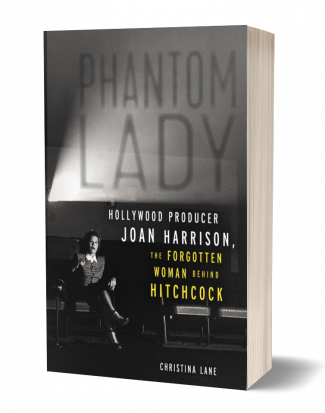 About Phantom Lady by Christina Lane:

In 1933, Joan Harrison was a twenty-six-year-old former salesgirl with a dream of escaping both her stodgy London suburb and the dreadful prospect of settling down with one of the local boys. A few short years later, she was Alfred Hitchcock’s confidante and one of the Oscar-nominated screenwriters of his first American film, Rebecca. Harrison had quickly grown from being the worst secretary Hitchcock ever had to one of his closest collaborators, critically shaping his brand as the “Master of Suspense.”

Harrison went on to produce numerous Hollywood features before becoming a television pioneer as the producer of Alfred Hitchcock Presents. A respected powerhouse, she acquired a singular reputation for running amazingly smooth productions– and defying anyone who posed an obstacle. She built most of her films and series from the ground up. She waged rough-and-tumble battles against executives and censors, and even helped to break the Hollywood blacklist. She teamed up with many of the most respected, well-known directors, writers, and actors of the twentieth century. And she did it all on her own terms.

Christina Lane is author of the Agatha and Edgar®-Award-winning book Phantom Lady: Hollywood Producer Joan Harrison, the Forgotten Woman Behind Hitchcock. She provides commentary for such outlets as the Daily Mail, CrimeReads and AirMail, and has been a featured guest speaker at the Film Forum, and on NPR and Turner Classic Movies. She is Professor of film studies in the Cinematic Arts Department at the University of Miami. You can find out more about her work at authorchristinalane.com./i