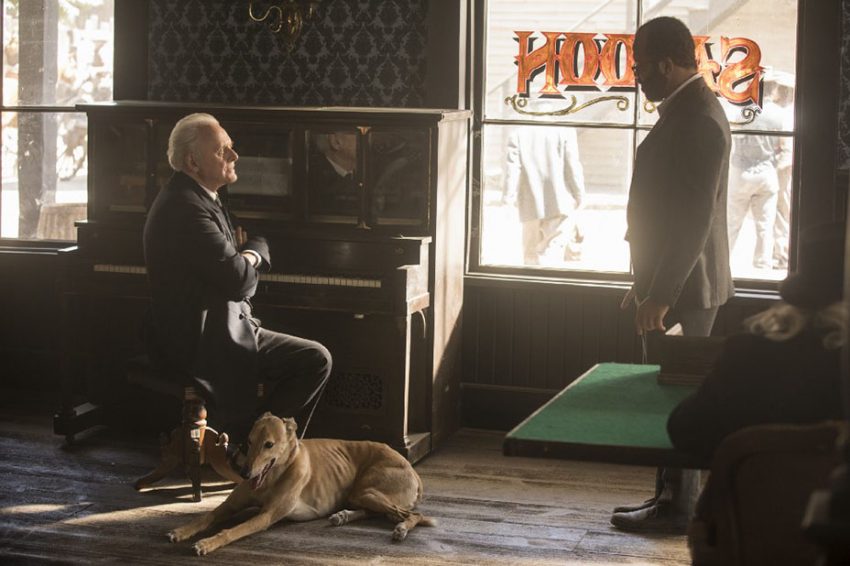 Bouncing back and forth between timelines and storylines, it’s easy to lose track of what is possibly present day. But the impression is that we begin this episode in the present, with Charlotte (Tessa Thompson), Karl Strand (Gustaf Skarsgard), Ashley Stubbs (Luke Hemsworth), and Bernard Lowe (Jeffrey Wright) in the outpost where Theresa Cullen was killed by Bernard. They are looking for Abernathy—because he contains the key—and they think that either Stubbs or Bernard sold out. In a roomful of Bernards, Charlotte and company finally figure out that the head of behavior is not all that he appears.

Fast-forward to Charlotte and Bernard in an interview room where she’s coaxing him to tell her what Dolores (Evan Rachel Wood) did with her father’s control unit.

Next, flashback to where we were last week with Peter Abernathy (Louis Herthum) bolted down in a chair, and the rescue team is on the way to recover the key host. I had thought that was present day, but it now becomes clear that it was still the past. That’s some clever writing and direction in filming to make these jumping-bean scenes appear so seamless.

Dolores and posse get to the Abernathy holding room, and she wants Charlotte to give up the secret to removing the key from her father. When Charlotte challenges Dolores, saying she wouldn’t know what to do with it, Dolores quickly shuts her down by saying she knows exactly what she’s going to do with it. But what I want to know is why doesn’t Dolores know how to remove the key? It doesn’t seem like brain surgery … or, er, I guess it kind of is. So, what exactly is the key? As Charlotte explained it to Stubbs—in a show of force from the “limited,” according to Strand, security head—it’s a decryption key, a “failsafe within a failsafe” in case of complete and utter chaos, such as what they are experiencing.

Dolores tells Charlotte that humans want to be like the robots, not the other way around, and that all the souls that the Delos company had gathered in the valley will essentially die there. Her mission is to snuff out the Delos project. After the cradle is blown to pieces by Angela (Talulah Riley), Dolores says the robots are truly free now that their backups are destroyed. In the ensuing confusion, Charlotte and Stubbs take the opportunity to escape from Dolores, leaving Abernathy behind. Last week, I doubted that Dolores would show her father compassion, but I was wrong, and she truly seemed to lament having to harm him. Still, she cuts him open to remove his control unit. In a side note that is imperative later in the episode, Teddy (James Marsden) puts out Coughlin’s (Timothy V. Murphy) lights in a vicious beating.

Bernard and Ford (Anthony Hopkins) have some great, and dark, scenes together. Bernard had printed the control unit for Ford’s resurrected self, and he comes to the realization that the park is an experiment where the hosts are the controls and guests are the variables for Delos to copy and decode the guests to market it as a “live forever” technology. But Ford says the project didn’t work because fidelity was not enough. Even his resurrected self doesn’t operate in the real world, only in the data world. Like a ghost in the machine, Ford wants to make good on his promise to Bernard of getting him out so his old friend can exercise free will.

Ford calls Bernard and the other hosts “original works,” not just copies of the imperfect human species. So, perhaps he’s implying that Bernard is the first successful “live forever” human android, made by Ford with Dolores as a reference and tester. Ford tells Bernard they have to “open the door,” and in a dark and godlike moment, Ford takes back Bernard’s free will because he’d be unable to survive in his current state. It seems that Ford isn’t playing a game so much as a cleaning up past mistakes, kind of like the Manhattan Project when scientists discovered something with incredible potential only to have it twisted in nefarious hands. But what’s interesting is that it also seems to be what William/Man in Black is trying to do. So technically, aren’t they are on the same side?

In the theater room, Bernard watches as a battle wages, with Ford telling him “it’s no longer my story, it is yours.” Bernard reluctantly shuts down the computer system at Ford’s urging, allowing Dolores full rein. And then, in another dark scene—both literally and figuratively—Bernard and Ford open fire on the humans, their faces lit only by the blasts from their automatic weapons. While Ford gives Bernard clear conscious by saying it’s not his fault, it makes one wonder if Ford is playing the role of Bernard’s good vs. evil consciousness. Or else we have to question whether Ford has really given up power and the story like he said, because he still seems very much in control.

Maeve (Thandie Newton) and the Man in Black (Ed Harris) reencounter while Maeve is trying to hide her daughter (Jasmine Raye) from the Ghost Nation. It’s all so familiar, as if she is destined to live this loop for eternity. But she takes control and uses her new voice to have some henchmen shoot the Man in Black. Lawrence (Clifton Collins Jr.) shows up with his gun pointed at Maeve, but she uses her wiles to help him see the deviousness of the Man in Black, and Lawrence shoots him down, repeating the words “a man ain’t real until he suffers” back to black-hearted villain. Is this why the hosts haven’t outright killed the Man in Black yet, to make him suffer? It leads me to question whether Maeve and Lawrence have free will or if they are still a part of Ford’s design.

Lawrence is killed. Maeve’s daughter is snatched. And Maeve endures heartbreak again before being shot. Lee (Simon Quarterman) is there to save her and takes her back to headquarters. Promises are also a big premise in this episode as Maeve confides in Dolores that she has one to fulfill for her daughter, that she will come find her if taken away. Remember the Teddy side note earlier: Maeve asks Dolores if she uses the excuse of “kin” (love) being another way that the humans tie them down to justify what she’s done to Teddy.

The episode ends with Charlotte still working Bernard for the whereabouts of Abernathy’s control unit. She says to him: “Open your eyes.” Remember when Bernard used to say that to Dolores, and we thought he was trying to help her achieve sentience? Oh, those naïve days—since then, there have been so many navigational recalculations where what we believed to be true has been upended. Here and now (maybe), Charlotte tells him it can be hard to separate real memories from those he’s been given, and a technician (David Bianchi) says it was as if Bernard had spent the entire interrogation debugging his own head.

When she again asks about Abernathy’s control unit, a memory flashes to the lab where Bernard had picked up the freshly-printed orb. Is that scene implying the unit was for Abernathy? But I thought we’d just found out that it was for Ford’s continuance. And even if that wasn’t the same one, didn’t we just witness Dolores extract it from her father’s head, so how would Bernard know what she did with it? Anyone care to help out a perplexed viewer here?

Regardless, Charlotte looks quite pleased with herself for squeezing out the intel. But I imagine her smugness won’t last long. Realizing that they have to track back to the Valley Beyond, Strand orders to “prep the phased array” so they can transmit the data when they get their hands on it—quite a confident bunch that they will make it and succeed.

So, maybe we still aren’t in the present? When they get to the Valley Beyond, maybe we will finally get an answer to all those floating bodies.