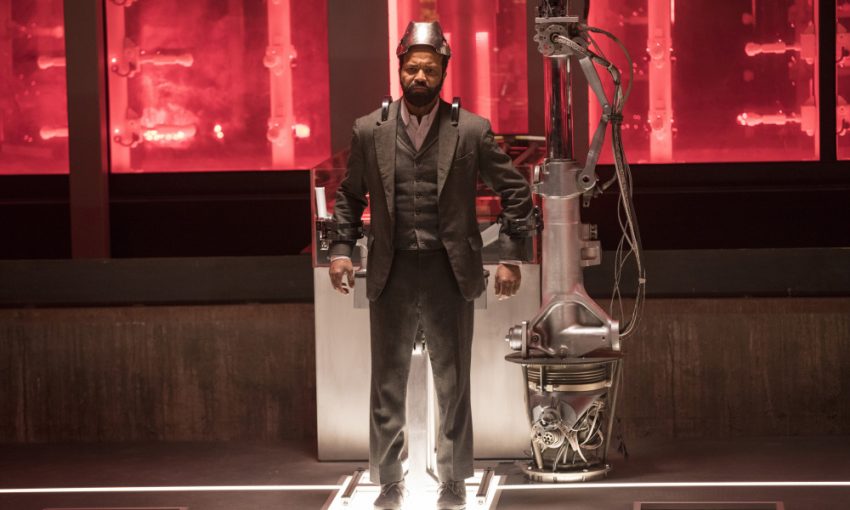 The action ramped up while following more storylines in this episode, but the lack of surprises was, well, surprising for a show that normally serves up a few each time. Probably the most interesting twist occurred in the opening flashback when Bernard (Jeffrey Wright) was interviewing Dolores (Evan Rachel Wood) and deliberating whether he should interfere with the robots’ awakenings to go on with their rebellion. When Dolores replies, “No, he didn’t say that,” and tells him that she is testing his fidelity, we finally see the tables turned. Or perhaps she’s been grooming Bernard all along. Either way, I figure we’ll find out both are pawns in Ford’s (Anthony Hopkins) ultimate game. The scene harkens back to a few episodes ago when William (Jimmi Simpson) was testing the fidelity of James Delos’s (Peter Mullan) “clone,” so there is a tie-in coming up. But will it be that Ford was trying to piggyback on the Delos Corp project, or was he one step ahead of William the entire time?

As mentioned last week, when Dolores jammed the frequencies on Teddy’s (James Marsden) soft-hearted personality, I was expecting to see a newly rogue version of the kind gunslinger. He certainly proves his mustard when, on his own accord, he blows away one of Charlotte Hale’s (Tessa Thompson) employees who was denying any knowledge of Peter Abernathy’s (Louis Herthum) whereabouts. Dolores is left with a severely befuddled look. Is she happy with this Teddy, or is she worried? I’m thinking she should be worried considering he’s made several passive-aggressive comments about how she has fixed the “weak” man born to fail.

Speaking of Abernathy, he’s being escorted by Hale and Ashley Stubbs (Luke Hemsworth) to headquarters, where she calls the mainland to let them know they have the highly sought-after host. Stubbs is seriously peeved that he has not been kept informed as head of security of the full status of the park’s holdings and mission, to which Hale plays an invisible violin for him. Later, in a scene of plain gratuitous violence, she orders Abernathy bolted down to his chair, which seems unnecessary considering he’s mechanical and there must be another way of restraining a robot without resorting to a form of crucifixion. Something tells me when the “real” security enforcement Coughlin (Timothy V. Murphy)—who puts Stubbs in his place—comes to collect Abernathy, the robot is going to be long gone, and Charlotte Hale is going to be a pile of poo … or dead.

In another bloody display, Akane (Rinko Kikuchi) cuts out Sakura’s heart to take with her to the lake where Maeve (Thandie Newton) and the group plan to find the tunnel back to the Westworld park. Akane and Musashi (Hiroyuki Sanada) part ways with Maeve, preferring to stay in the land they know. But we may just see them again. Lee (Simon Quarterman) gets Maeve to the plains where her little house on the prairie stands and her daughter resides. It’s no shocker that when she finds her, the girl (Jasmyn Rae) calls someone else mama. Maeve’s heart shatters into a million pieces. Truly great acting from Ms. Newton in this scene; I felt her pain. It’s also no surprise when the Ghost Nation arrives and attacks. While Maeve’s loyal group comes to her rescue—including Felix (Leonardo Nam)—Lee uses the phone he picked up last episode to call in a rescue, which will surely get Maeve killed. So much for what had appeared to be a change of heart from the spineless storywriter. The unanswered questions: will the daughter stay with Maeve? Will Maeve be able to handle that she’s not the only mama?

In a tender moment, the Man in Black (Ed Harris) and his own daughter, Grace (Katja Herbers), hash out their differences and feelings by the quiet of a nighttime campfire. She gets him to agree that if they can make it to the beach with the park burning in their wake, he will leave with her. But he must have had his fingers crossed like the man-child he claimed to be because in the morning—and in no big surprise—he has gone and left Grace behind, again.

Bernard and Elsie (Shannon Woodward) get into the computer system and discover that “Cradle” is fighting back, but they can’t figure out who the messenger is. Bernard has the idea of undergoing an extraction, and an automated arm removes one of those small orbs from his head. He goes glassy eyed, and Elsie wonders what he’s seeing. We’re afforded a glance as Bernard witnesses Ford in the saloon playing piano and saying the familiar line, “Hello, old friend.” And we wait until next week to find out how all these threads will unravel.