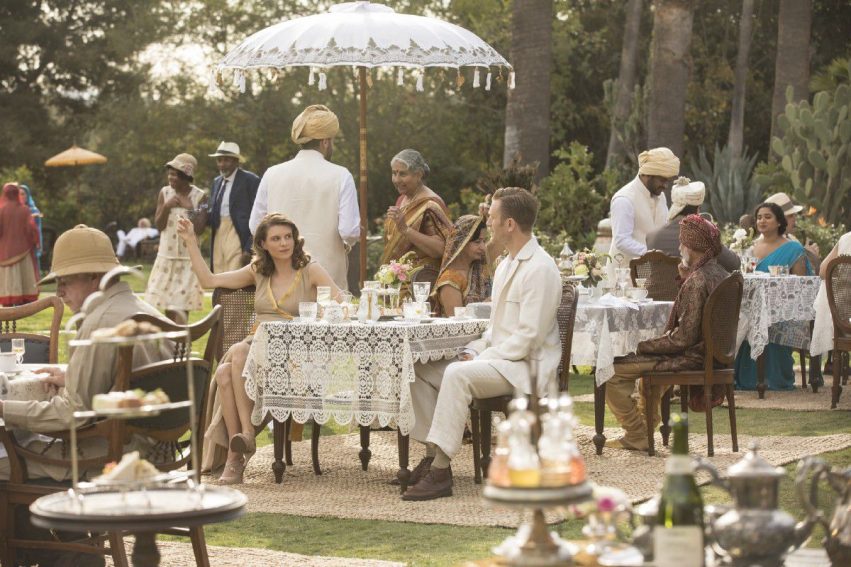 We begin this week in an entirely different park—colonial British India perhaps—where big-game hunting is the sin du jour. Two guests use a form of Russian roulette as a human/robot assay test before getting intimate … they’re looking for the real deal, you see. After their hookup, they head out to the grounds where things are abnormally quiet.

The woman (Andra Petru) isn’t seeing the expected hosts: entertainers, cooks, etc. Instead, they find that several guests have been murdered in a tent. Just as they are regaining their wits, Ganju (Sean Mann), a guide, comes out of the forest with a gun in hand. Ganju shoots Nicholas (Neil Jackson) dead, and the woman grabs a gun from in the tent and blasts the side of Ganju’s face apart.

She hightails it out of there but encounters a snarling tiger in the forest. She tries to outrun the large, muscular cat by crossing the “park experience” boundary. But here’s where I take a bit of exception to the premise of the androids going haywire—even the robotic animals are joining in the fight for freedom? They too have become sentient and want to be liberated? Okay, most likely the poor creatures have been reprogrammed to fight back to help the liberation cause, but then isn’t that just another form of exploitation?

So, back to the woman and the tiger: as she runs from the beast, she traps herself at the edge of a cliff, a large body of water at the bottom. The tiger lunges, she shoots, kills the beast, and the two plunge over the precipice. We can all guess who washes ashore dead. Yep, the tiger. But the woman, she lives. And she’s greeted on the shore by several Ghost Nation warriors. Is she going to become of some significance, or is she just a plot device? I’m thinking the latter because her character wasn’t even given a name, unlike Nicholas and Ganju … hmm.

So, all that must have occurred before Bernard Lowe (Jeffrey Wright) and the “SWAT” teams found the dead tiger in “Journey Into Night.” Still, we go through more flashbacks of Charlotte Hale (Tessa Thompson) and Bernard on the run after fleeing from the gala massacre. They come across Rebus (Steven Ogg) and his gang holding a gaggle of gala attendees hostage for a price for the confederados. Peter Abernathy (Louis Herthum) is among the humans. That’s interesting. Charlotte and Bernard intervene and readjust Rebus’s settings to be a quick draw in order to snuff out his entire gang and act as a chivalrous escort to see the guests back to safety while Charlotte and Bernard secure Abernathy. But the confererados show up, and they are ticked about losing their commodities.

Abernathy challenges them while Hale rides off, leaving Bernard and Abernathy to be captured. Hale is one tough lady for an office executive. Methinks she may have some military survival training behind her because those aren’t the moves of someone who’s only got a gym membership. She also shows her take-charge attitude and grit when she makes her way safely to an underground station where she finds the “SWAT” teams rallying, then instead of finding a place to hide out, she joins them on the storming of the confederados’ fort where Delores (Evan Rachel Wood) has taken over.

Delores confronts Colonel Brigham (Fredric Lehne) to recruit his troops. When a tied-up Abernathy and Bernard are brought in, she rescues her father and sends Bernard to jail. She tells Teddy (James Marsden), “Look what they’ve done to him; you’re all I have left,” and she promises to get help for her father. She asks Bernard, and he discovers that someone has overwritten a program in Abernathy to hide an underlying file, but he is unable to access it due to its encryption. Bernard realizes the importance of Abernathy and tells Delores that they will not stop until they have possession of her father. He keeps fiddling with the code and uncovers something of major significance, but we are not let in on it. He’s disrupted by the “SWAT” attack, and he drops to the ground to play possum. When they take away Abernathy, Bernard scoots outside. He’s been acting strange again, shaky and limping—is he losing more fluid?

Delores spots the men carrying off her father and goes after them, unloading her gun and dropping them like flies. But she’s not just after the humans. As she’s said all along, not everyone is destined to go to the end, so she not only set up the condeferados to take the fall so that her own ragtag bunch could escape but her troops knock off the soldiers who’d joined her side. Devious Delores.

After nearly all the soldiers are dead—only a few remaining, including Craddock (Jonathan Tucker)—Delores tells Teddy to take them out back and shoot them. But a confused and angered Teddy doesn’t do it—he lets them go. Unfortunately for him, Delores has been watching. As conflicted as he is, something tells me if he doesn’t step back in line soon without question like he used to, Delores will never let him make it to his awakening.

Speaking of awakenings, besides Bernard’s, Maeve’s (Thandie Newton) quest may be the “human” conduit the Westworld audience can latch onto best in Season 2. Ms. Newton has done a masterful performance of conveying a saloon madam watching the bottom dollar to, now, a heartrending—though tough as nails—mother in a desperate search for the only thing that matters: her daughter. This story thread captivates for one universal reason: a mother’s undying love is steadfast. Even a robot can’t be made to simply forget her child by hitting the delete key.

So, on to Maeve’s journey. Her group is faced by the Ghost Nation warriors at a creek crossing. Hector (Rodrigo Santoro) talks to them in Lakota. When they indicate they will let all but Lee (Simon Quarterman) pass, Maeve tries to redirect them with her reprogramming commands, but it doesn’t work. So she tells Hector she needs Lee. Hector is once again ready to die standing up for his lady.

They escape to a substation where they run into Hector’s old riding pal, Armistice (Ingrid Bolsø Berdal), and also find Felix (Leonardo Nam) and Sylvester (Ptolemy Slocum). Maeve thinks she can use Felix’s help, but he basically tells her that he’s out of his element now. Together, they abandon the subterranean station and head north, where they apparently have set foot in a whole different park. For all appearances, it’s Samurai world, and Lee is all too anxious to get out of there, pronto!

I’m partial to the Maeve storyline and how she’s working with both robots and humans. I know it’s tactical, a utility in the bid for survival, but I’m hoping that it will turn into a genuine partnership so we’re not left with a straightforward “us against them” message.

And I’m still holding out for more of the effervescence that was prevalent in Season 1. But certainly, the plot threads in this current season are beginning to hum along at a reasonable pitch.