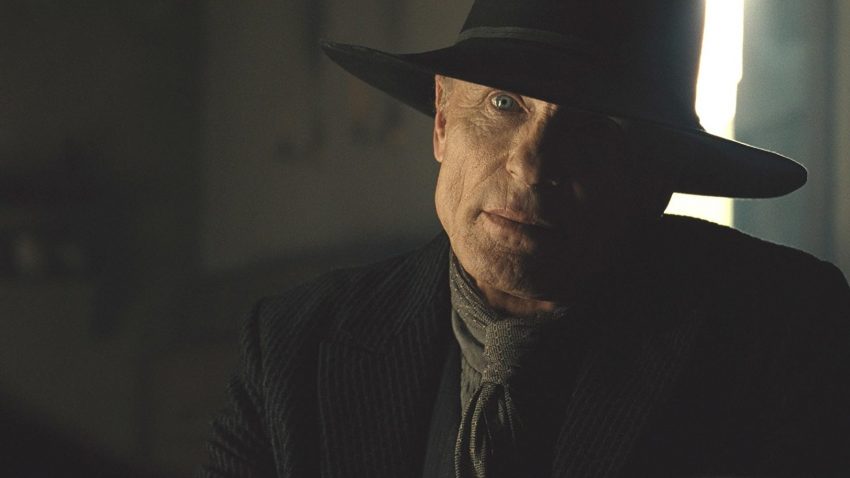 The tantalizing twists and mysteries that were such a big part of the first season—and so lacking in last week’s Season 2 opener—returned in a small way in this episode, and it’s just enough to spur the interest.

The Man in Black (Ed Harris) is, of course, finally in a game where the stakes are real, just as he’d always wanted yet Robert Ford (Anthony Hopkins) had never allowed. But now that Ford is dead and has changed the game, he’s left plenty of riddles and booby traps around the park to give his nemesis perpetual headaches, and worse.

The Man in Black realizes he’s going to need assistance, so he finds and rescues Lawrence (Clifton Collins Jr.), as he has many times in the past, for his help in rallying up a posse to head west. The pair goes to the town of Pariah where a slaughter has occurred by El Lazo (Giancarlo Esposito) and his men. The Man in Black first tries to tempt El Lazo with the promise of a real ending to the story, but when the desperado declines, the Man in Black grabs El Lazo and holds him by gunpoint to force the banditos into joining his mission. El Lazo again refuses, and he speaks these magic words, “This game was meant for you, William … but you must play it alone,” and all his men circle around and shoot themselves. El Lazo adds that he will see the Man in Black in the Valley Beyond, then kills himself with his captor’s gun. When Lawrence asks the Man in Black about the person who made the place he is seeking, the Man in Black replies he built it, and it’s his greatest mistake.

I didn’t believe we’d see young William (Jimmi Simpson) or Logan (Ben Barnes) again, thinking their thread had come to an end, but there’s still a lot of backstory to fill in. We witness more of William’s jaded turn, like when he went from a white to a black hat and took the Delos Corporation to the next level by securing the company’s investment in the robotics and AI initiative. We get a feeling of when he fell in love with Delores (Evan Rachel Wood) only to coldly cast her aside thinking she could never become what he thought he first saw in her. Perhaps it was Ford’s goal all along … to give William the sentient being that he thought he’d fallen for in some strange cat-and-mouse game. Could it be that Ford and William have been in a personal who-can-best-the-other competition all those decades?

Delores apparently has an idea of where she needs to go and what is waiting there for her to win the war. She tells Teddy (James Marsden) that an old friend was foolish enough to show her—but it’s not a place, it’s a weapon. She knows she needs allies, though she’s having a hard time rounding up the newly liberated robots, who have either their own ambitions—like Maeve (Thandie Newton), who basically tells Delores to piss off and goes her own way—or their story has played out and they don’t really know what to do—like the army commander who also didn’t bite. So Delores, Teddy, and Armistice (Ingrid Bolsø Berdal) shoot ’em up, and afterward, Delores directs the technician (Patrick Cage) they’ve shanghaied to reset the stats on the soldier bots to be under her leadership.

Anyone else feel desensitized to the bodies strewn about the various towns and countryside and the executions becoming commonplace? There’s almost a gimmicky manner to the placement of the corpses, as if you can hear the director saying, “Okay, extras, look dead now.” Perhaps the creators should take another look at Peckinpah’s The Wild Bunch (1969) because even with all that old-style, fake-looking blood, you actually felt like a massacre had happened.

In another flashback, William explains to papa James Delos (Peter Mullan) that Westworld is the place where guests can behave like no one is watching, not even God, and not be judged—or at least that’s what they’ll be led to think. So, it seems William isn’t just someone who got lost in the game, he’s had a hand in crafting the behind-the-scenes mechanics all these years. It will be interesting to find out what has been done with the DNA collected from the guests—was it being used to create more realistic robots, to generate a massive marketing database for the self-serving company purposes as implied, or to compile a dirty laundry list to count against the guests during judgement of their sins? I’m leaning toward the latter given all the biblical references that have been popping up. After all, the Man in Black tells Lawrence that he wants an appeal to his judgment verdict—then, after that’s accomplished, since he’s the one who got the whole thing rolling, he’s going to be the one to burn it to the ground.

But I think I see their future and their ending—Delores kills her former love, William. Remember last season when it was revealed that Delores was actually Wyatt, the Union commander who decimated an entire town plus all the soldiers, Teddy at her side, but then she killed him too. Well, now here we are, on Delores/Wyatt’s infamous Vendetta Ride, ridding the streets of any signs of detritus, and it’s beginning to look like William might be at the top of the list.