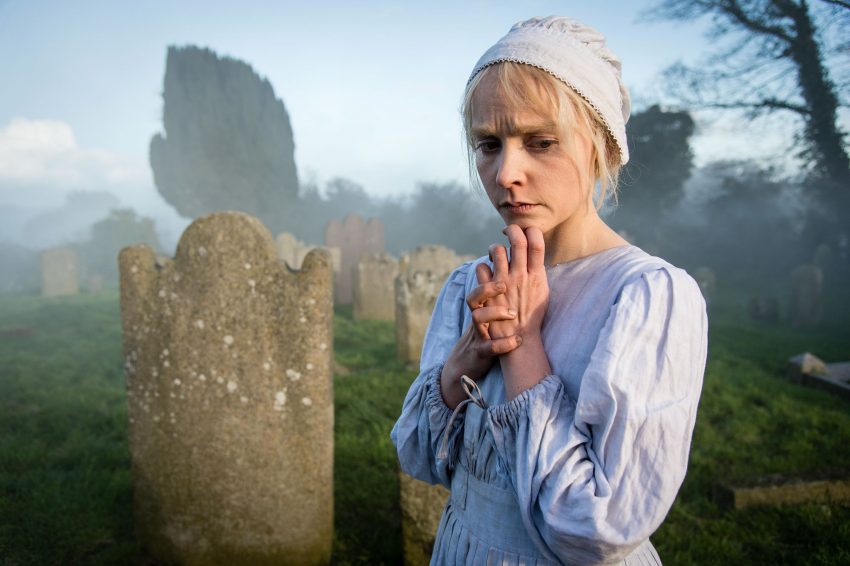 This is the third time the BBC has adapted Wilkie Collins’ iconic novel, The Woman in White. Previously, there were also several silent films, a 1948 Hollywood movie co-starring Sidney Greenstreet, Vadim Derbenyov’s 1982 Soviet production, Andrew Lloyd Weber brought it to the West End and Broadway (ironically his best but least successful book musical), and Douglas Preston & Lincoln Child riffed on its classic villain, Count Fosco, in their novel Brimstone. Each new take on The Woman in White is like going back to where it all started for mystery fans. There were earlier examples of mysterious fiction before its serial publication starting in 1859, but none were as enduringly popular or influential. Even viewers who are well acquainted with the book and past dramatizations should enjoy watching the revelation of its secrets once again in the five-part The Woman in White, which premieres this Sunday on PBS.

Anne Catherick is the “Woman in White.” She is sickly and as pale as her preferred wardrobe. Catherick is also very much afraid she will be forcibly returned to the Bedlam-like asylum she has just escaped from. Fortunately, dashing painter and art teacher Walter Hartright helps her elude her pursuers. Subsequently, he is struck by her resemblance to one of his new students, Laura Fairlie.

Of course, Hartright falls for the pretty Fairlie rather than her plainer but more resourceful and independent half-sister, Marian Halcombe. Unfortunately, Fairlie was promised in marriage by her father to the financially-strapped Sir Percival Glyde, Baronet, who is determined to complete the wedding bargain so he can take control of the orphaned heiress’s fortune (a princely twenty-thousand pounds).

This is where the skullduggery really comes into play. It quickly becomes apparent Glyde does not have her best interests at heart. He also has good reason to permanently silence the fugitive Catherick, because she and her estranged mother are the only ones who know his scandalous secret. Not even Glyde’s sinister co-conspirator, Count Fosco, knows what the cash-poor Baronet is so desperate to keep hidden, but the Sicilian exile has his own shadowy history to worry about.

The Woman in White could almost be considered the first legal thriller as well as one of the earliest mysteries, because Collins freely drew on his own studies (he “read for the bar,” but never practiced) to spin a suspenseful yarn involving wills, forgeries, power-of-attorney signatures, and conveniently missing documents. Legalistic themes and motifs are especially important to Fiona Seres’ adaptation, which creates the original character of intrepid scrivener Ersamus Nash to collect testimony on behalf of Halcombe and her half-sister. Clearly, Seres and director Carl Tibbets hope Collins’ themes of gender inequality in the eyes of the law will resonate with contemporary audiences in the #MeToo era, but they are not inventing or exaggerating anything for the sake of timeliness. It is all there in the source novel.

The casting of Riccardo Scamarcio as the usually rotund Fosco is bound to be controversial with purists. Yet, it should be stipulated Scamarcio’s svelte Fosco is the most compulsively watchable character in this Woman in White, thanks to his Mephistophelean charm. Dougray Scott’s Percival Glyde is also quite notable, balancing dark rage with a rather pathetic sadness. It you had to choose to live your life as a Wilkie Collins villain, it would clearly be much more fun to be Fosco rather than Glyde.

As is often the case, the decent folk are rather dull by comparison, especially Ben Hardy’s blandly vanilla Hartright (it doesn’t help either that the heartsick art tutor jets off to Honduras for an extended period of time). Likewise, Olivia Vinall is dully passive as Laura Fairlie. In contrast, Jessie Buckley is so forceful as Halcombe, she constantly reinvigorates the production’s energy level. Frankly, the more we see the half-sisters side-by-side, the more Hartright’s choice of Fairlie over Halcombe starts to become a credibility issue. Regardless of viewers’ opinions on the invention of Erasmus Nash, it is hard to fault British TV veteran Art Malik’s gruff but achingly dignified performance–but since he takes over most of the investigative leg-work, his presence necessarily diminishes Hartright this time around.

Tibbets’ Woman in White is just as atmospheric as ever, delivering plenty of windswept cemeteries and skulking down darkened hallways. It definitely lives up to the book’s reputation as one of the sub-genre-defining, gothic-influenced “Sensation Novels,” as well as an archetype-establishing mystery. The resulting intrigue remains jolly entertaining to watch. Recommended for fans of Collins and British literary mysteries, The Woman in White premieres this Sunday (10/21) on most PBS outlets nationwide.