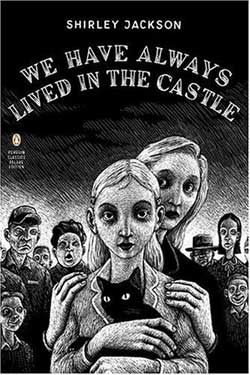 I’ve got Shirley Jackson on the brain. I just recently finished reading Let Me Tell You, a forthcoming collection of short stories and essays by her, most of them previously unpublished. If you like Jackson’s writing and/or are intrigued by her personality, you’ll want to get a hold of that anthology when it’s released this late July. I loved the compilation of Jackson’s work, and when I finished it, I was left wanting more of her unique voice. So I turned to my personal favorite of all her literary efforts: her final completed novel We Have Always Lived in the Castle, which was published in 1962, three years before her death at age 49.

We Have Always Lived in the Castle is, like Jackson’s signature short story “The Lottery” and other works of fiction by her, a tale that forces its readers to accept the conditions of a kind of alternate universe. It’s not a work of sci-fi or fantasy, but like a good Twilight Zone episode, it involves extraordinary human experience. To a great extent, the oddness of the spellbinding tale exists inside the mind of its narrator. I’ll let that singular personage introduce herself, via the opening paragraph of the book:

My name is Mary Katherine Blackwood. I am eighteen years old, and I live with my sister Constance. I have often thought that with any luck at all I could have been born a werewolf, because two middle fingers on both my hands are the same length, but I have had to be content with what I had. I dislike washing myself, and dogs, and noise. I like my sister Constance, and Richard Plantagenet, and Amanita phalloides, the death-cup mushroom. Everyone else in my family is dead.

The “everyone else” Merricat (as she’s known to her sister and the people who live in the town the Blackwoods inhabit) refers to are her and Constance’s parents, their little brother, and an aunt. They were all killed six years before, by arsenic poisoning, at the family’s dining table. The only occupants of the house who survived that night were Merricat, Constance (who is approximately 28) and their Uncle Julian (I don’t think his age is ever mentioned, but I presume he is a little past middle age or thereabouts). Constance was accused of murdering the family members and tried in court, but apparently there was not enough evidence to convict. And ever since, she, Merricat, and Julian have been leading a kind of post-apocalyptic existence in the home. Constance hasn’t left the house since the murders, not counting her time in court. She is a gentle, enabling soul who tends to her garden, takes care of Julian, dotes on Merricat, and makes carefully thought-out meals for the trio. Julian is now an invalid who is mentally lost half the time, and who is obsessed with writing the story of the night of the family deaths. Merricat, with her bizarre thought patterns, just kind of wanders around the home and its grounds, hanging with her cat, Jonas, whose traits and actions she describes in human terms. Merricat’s lifestyle is mostly driven by superstitions. She has safe words she says to herself, that make her feel protected from external forces – both specific and vague – that she finds threatening; likewise, she tends to bury peculiar objects around the grounds of the home, and is made to feel a precarious kind of security through this series of actions.

Sometimes, Merricat has to go into town to gather foodstuffs for her family, and that’s when things get really tense and when her unique way of thinking manifests itself. The Blackwoods are landowners who have, since the murders, become disgraced gentry in the town. Many of the common folk now take pleasure in the family’s downfall. Some of them fear the Blackwoods, or consider them sickos who should be forced to leave the area, and some like to pick on Merricat when she makes her trips to do her shopping. This segment from an early chapter gives an indication of how Merricat relates to the villagers, and how the latter feel about the Blackwood family now:

I am walking on their bodies, I thought, we are having lunch in the garden and Uncle Julian is wearing his shawl.

The start of the big turn in the story occurs when the girls’ cousin Charles abruptly arrives at the home. Charles, 32, makes it known he is going to stay at the house for a while and try to fix what’s wrong in the inhabitants’ lives. Cousin Charles is a presumptuous, dogged, materialistic kind of fellow. He’s barely started his uninvited visit before he starts attempting to alter the uneasy balance that’s been maintained in the home of late. He moves into the girls’ dead father’s room, treats Julian like he doesn’t need to be accounted for, and makes as if he’s the big, able man who is going to come in and straighten the two lost girls out and set their lives in proper order. Constance appears to be under Charles’s spell, at least initially, and she and Charles form a kind of alliance, wherein they are going to be the two levelheaded adults who need to decide what to do about the batty old man and the undisciplined teenager. As one might expect, Merricat is not enamored of Charles or his plans to change their lives. Here’s Merricat, in her inimitable style of thinking, reflecting on Charles’s visit:

Charles had only gotten in because the magic was broken; if I could re-seal the protection around Constance and shut Charles out he would have to leave the house. Every touch he made on the house had to be erased.

Charles has no intention of leaving any time soon, though, and the combination of his determination and Merricat’s resistance to him sets up the shattering conclusion of the story.

Shirley Jackson was a daring writer who didn’t mind challenging the sensibilities of her readers. She seemed to enjoy shocking people. We Have Always Lived in the Castle is a story that some might find deranged and to be avoided, while others of us see it as a beautifully written, captivatingly sinister tale. For me, it’s the strongest piece of work written by one of the more distinctive and commanding literary voices I have encountered.