May 18, 2018
Read an exclusive excerpt from Warlock Holmes: My Grave Ritual by G.S. Denning, then make sure you're signed up and comment below for a chance to win a bundle of all three Warlock Holmes so far! 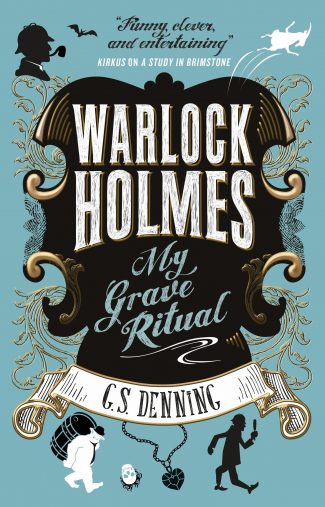 Warlock Holmes: My Grave Ritual by G.S. Denning is the third book in the hilarious and clever Warlock Holmes series.

As they blunder towards doom, Warlock Holmes and Dr. John Watson find themselves inconvenienced by a variety of eldritch beings. Christmas brings a goose that doesn’t let being cooked slow it down; they meet an electricity demon, discover why being a redhead is even tricker than one might imagine, and Holmes attempts an Irish accent. And, naturally, Moriarty is hanging around … in some form or other.

How else is the well-bred gentleman to communicate to the world that he is deep in thought? If he cannot furrow his brow, lean the leather-patched elbow of his thinking jacket down upon the table in front of him, chew thoughtfully at the stem of his pipe, taking occasional, reflective puffs and staring off into the middle-distance—how is he to make it clear he’s engaged in deep cogitation? Why, he might just be sitting there, doing nothing at all!

In other words, it was a damned inconvenient day to be out of tobacco, for I had much to ponder. I elected to do what any gentleman would. No, not put on my boots and walk a block to the tobacconist’s. To steal some of my companion’s, of course. Holmes had tobacco. I knew it, because of the rather strange storage method he’d worked out. A few days previous I’d woken to find my friend had nailed an old Persian slipper to our mantel, hanging toe downwards. To my continued surprise, I found it stuffed with tobacco. I’m sure I meant to howl at him for it, but I’d forgotten. What was one more domestic peculiarity, in the face of my present woes?

I stole a pipeful of Holmes’s shag and sat down to worry. Clearly, the game was afoot once more. I knew my opponents, but not their goals. In point of fact, I didn’t even know the Woman’s name. (Though there was every indication it wasn’t Bang Cleopatra.) I puffed and pondered. I had to assume the Woman’s plan continued to move forward to some nefarious purpose, hidden from my sight. What was my counter-move? I needed to make one, didn’t I? Surely I should not just sit about, smoking, while the game moved on without me!

I got up and helped myself to a second pipeful of Holmes’s stash and sat back down.

At least my two problems had become one. The Woman—so far as we knew—was in current possession of the Moriarty Rune. But was she working with him or against him? Whatever the case, I realized I must think of Moriarty as nothing but an accessory to my true, current nemesis. Yes, my current focus must be upon the Woman and my first moves must be designed to gather information. I had almost decided to get up and actually do something, when the door opened and removed my chance.

“Hullo, Watson!” Warlock piped up, hanging his coat on its hook by the door. “How goes the brooding?”

“Fairly well, I suppose. Oh, I hope you don’t mind, but I helped myself to a bit of your tobacco.”

“Think nothing of it,” said Holmes, and started jauntily back towards his room. Just as he swung open his door, he stopped. It seems some unpleasant remembrance had suddenly arisen to trouble him. His lips pinched together in thought for a moment, then he slowly said, “Except… I am currently out of tobacco.”

“No you’re not; you’ve got a whole slipper full of it, hanging just over there.”

“Ah! What have you done?” shouted Holmes. He recoiled, staring back and forth between myself and the slipper, then demanded, “Who are you?”

“Are you? I do not address the flesh only, but the will that commands it! Name yourself !”

“I invoke the name of Xantharaxes the Undying! If he is present, he must declare himself !”

“Oh?” said Holmes, brightening. “Well that’s lucky, isn’t it?” He marched over to me, took my pipe, stared thoughtfully into the bowl for a few moments and gave the ash a poke. “Hmmm…” he said, then went to the mantel and gave a few thoughtful finger-jabs down into the slipper.

“So, this can be smoked? I wouldn’t have thought it.”

“Of course tobacco can be smoked. That’s what it’s for.”

“I know perfectly well what tobacco is for,” said Holmes, rolling his eyes at me. “What I do not understand is why you’d assume this to be tobacco.”

“Really?” He gave a few more pokes down into the slipper, then gave it a reluctant, inquisitive sniff. “I suppose it does, rather.”

“Are you telling me that’s not tobacco?”

“Holmes, what is in that slipper?”

“I’m not sure you want to know, Watson.”

“You promise you won’t be angry?”

Holmes gave a little sigh and asked, “Have you heard of Darius I?”

“That’s the fellow. He wasn’t born to that throne; he took it by force. He had a whole story set up, where the reigning king wasn’t really who he claimed to be, but an impostor who needed to be murdered. Which Darius did, with the help of six rich friends, three thieves, two tricksters and one rather impressive sorcerer: Xantharaxes the Undying. But once he had the throne, he had a problem: those twelve people knew for certain that he wasn’t the legitimate king. The rich friends got to stay, but it wasn’t long before he decided the thieves, tricksters and sorcerers needed to go. Of course he worried—not without reason—that the murder of Xantharaxes the Undying might be a bit of a difficult egg to poach. Xantharaxes had made the claim that the pieces of his mortal remains, no matter how damaged, would mend and regain life after his death. Darius, it seems, had reason to believe it.

Thus, immediately following the execution, Xantharaxes was mummified, shredded, wrapped in some of his old clothes and scattered across the length and breadth of the Persian Empire. It was thought that this might prevent his resurrection—if not forever, then for a very great while.”

“I just smoked part of a mummy?” I cried, clutching my throat.

“Nobody’s fault but your own, Watson.”

“I stole it from Moriarty, years ago,” said Holmes.

“He had a fascination with immortality. It was his main pursuit, while he lived.”

“And why did you decide to nail it to our mantelpiece?”

“I caught it trying to walk out of here a few nights ago.

Nailed the thing to the fireplace to keep it from wandering off.”

“I see,” I said. “So, in fact, the contents of your old Persian slipper are not tobacco, but…”

“An old Persian,” said Holmes. “And if I’m honest,

Watson, it seems like a much more apt thing to keep there, don’t you think? Why, if someone came up to me and said,

‘Guess what I’ve got in this old Persian slipper?’ I think, ‘An old Persian,’ would cross my mind long before, ‘Some delicious pipe-weed, which you have chosen to nail to the furniture.’ Really, Watson, that famous intellect of yours seems to have failed you. Not your finest hour, I fear.”

I could not bring myself to disagree. Holmes kept peering into the slipper, giving its contents the occasional, exploratory poke. “Who would have thought?” he mused.

“It’s a poor sort of immortality that can be overcome by a trusty old briar pipe and a match, eh? Oh! Say, Watson, I don’t suppose you’d consider doing the world a favor and finishing the old fellow off, would you? Just think: a weekend with a good book, a snifter of brandy and as many pipefuls of the old Xantharaxes as a fellow could ask for!”

“Er… well… now that I know the nature of the stuff I’ll confess I’m a bit less keen. Holmes, am I going to be all right?”

“I should think so. You haven’t infused yourself with all of Xantharaxes, you know, just a tiny part of him. And he was known for nothing but immortality and prophecy, in any case. Nothing dangerous. I should think you’ll notice nothing but a few minor effects along those lines.”

“Oh, you know, minor invulnerability. If you nick yourself with your razor this week, you might not bleed. You might stub a toe and not care. Oh, and some lesser powers of prophecy. Might be a good week to purchase a lottery ticket or invest in stocks. And some prophetic dreaming, I would think. Yes, that’s practically a given.”

Comment below for a chance to win a bundle of all 3 Warlock Holmes books by G.S. Denning! 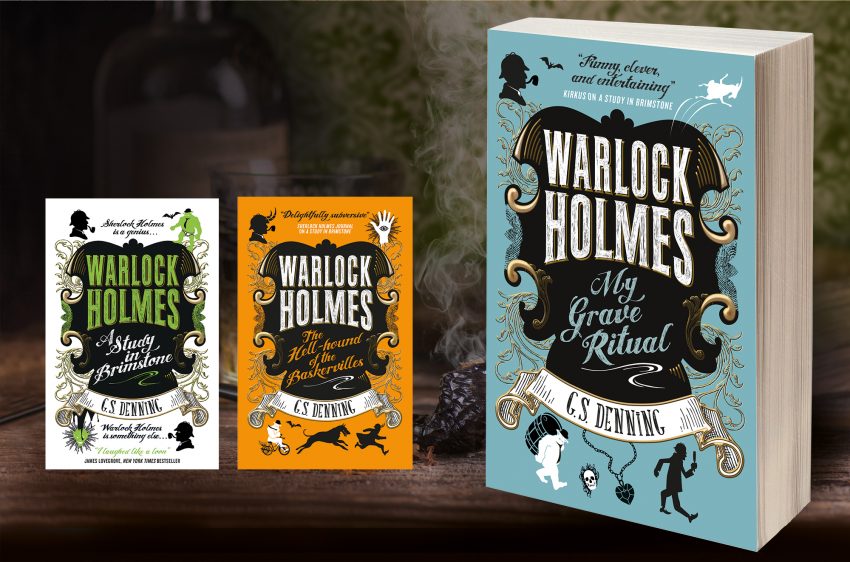 Warlock Holmes Bundle Comment Sweepstakes: NO PURCHASE NECESSARY TO ENTER OR WIN.  A purchase does not improve your chances of winning.  Sweepstakes open to legal residents of 50 United States, D.C., and Canada (excluding Quebec), who are 18 years or older as of the date of entry.  To enter, complete the “Post a Comment” entry at http://www.criminalelement.com/warlock-holmes-my-grave-ritual-new-excerpt-comment-sweepstakes beginning at 10:00 a.m. Eastern Time (ET) May 18, 2018. Sweepstakes ends at 9:59 a.m. ET May 29, 2018. Void outside the United States and Canada and where prohibited by law. Please see full details and official rules here. Sponsor: Macmillan, 175 Fifth Ave., New York, NY 10010.

G.S. Denning was born in Seattle, Washington. He has published articles for games company Wizards of the Coast, worked as an editor, written a video-game script for Nintendo, and written and performed shows at the Epcot Center, Walt Disney World. With a background in improv, Gabe has performed with Ryan Stiles and Wayne Brady, and he currently has a play running in Seattle. He now lives in Las Vegas with his wife and two children.