January 9, 2023
First in a new cozy mystery series by Olivia Blacke, Vinyl Resting Place follows three sisters who decide to open a record-slash-coffee shop in the town of Cedar River, Texas. But as they soon discover, opening a family business can be murder. Read an excerpt here!

The best part about working for the family business is that they can’t fire me without causing all sorts of unwanted drama. The worst part is I can’t ever quit, not unless I want to hear about it every single Thanksgiving for the rest of my life—although I would put up with a whole lot for a plateful of Uncle Calvin’s deep-fried turkey. And as a bonus, at the family record shop I get to work with my two older sisters.

“Juni! It’s been too long.” An older Black woman shuffled toward me, arms outstretched for a hug.

My full name is Juniper. Juniper Jessup. But most folks around here call me Juni.

“Miss Edie!” I exclaimed, folding myself into the shorter woman’s embrace. Growing up in Cedar River, Texas, all the latchkey kids found their way to Miss Edie’s after school. Even though my mother was usually home or at the family record shop, at least once a week I invented an excuse to join the other kids at Edie’s. “You’re looking amazing.”

“Don’t you know it?” she agreed with a wide grin. She let go and stepped back to clasp my hands. As usual, she was dressed in bright, garish colors held together with elastic and Velcro. Her curly white hair was cut short and her grin was genuine. “Just look at this place! You and your sisters done good, kid.”

“Thanks,” I replied with a blush. I looked around Sip & Spin Records, the record shop/coffee bar my sisters and I owned, and felt a surge of pride.

The back wall behind the barista station and cash register was rough exposed red brick, lending an air of industrial chic to the crowded store. The side walls were a silvery gray, but I could barely make out the paint underneath a layer of vintage concert posters and framed albums. Above us was a second floor loft ringed with a wide balcony, where shelves full of records were mounted to walls and bins, with even more albums lined up against the shiny black railing. The front wall was enormous panes of glass decorated with our logo on either side
of the main entrance, the door to which was currently propped open to welcome customers and friends.

It was almost half past ten, and the grand opening of Sip & Spin Records was in full swing. Upbeat music and happy overlapping conversations filled the room. I didn’t know why I’d been so nervous that the party would be a bust. We were packed to capacity, with people filling the main floor and the balcony overhead.

Although to be fair, that probably had at least as much to do with the free-flowing beer kegs set up near the coffee station and the complimentary taco truck out front as it did with our advertising campaign or the resurging interest in vinyl records. Then again, there were plenty of people browsing our carefully cultivated collection. Hopefully that would convert into future sales and repeat customers.

“I see some folks I need to talk to, but now that you’re back in town, you come see me soon, hear?” Edie said.

“I most certainly will,” I agreed. I felt bad that I hadn’t gone around to see her already, but things had moved at a frantic pace ever since I moved back home. We’d worked constantly to get the shop ready for tonight’s opening, so I hadn’t had much time to myself. Besides renovating the space and filling it with records, my oldest sister, Tansy, had come up with the idea of setting up a small coffee shop in the back corner, which had wreaked havoc on our permits, but in the end we got it all done by working together and calling in every favor we’d ever collected.

Out of the corner of my eye, I saw my middle sister, Maggie, dash toward a patron who was leaning over the Golden Oldies section, a glob of guacamole oozing ominously from the end of their taco. She swooped in with a napkin to avert disaster with the skill of someone used to cleaning up other people’s—and by other people’s I mean my—messes. Out of the three of us Jessup girls, Maggie was the most fastidious. We shared a bedroom growing up. Her side was neat as a pin. Mine, well, was significantly less so. She had a lot of practice picking up after me.

It felt like déjà vu, not only being home in Texas and watching Maggie in action but also being back in this familiar record store. As the baby of the family, I’d felt the need to spread my wings farther than either of my older sisters. I’d left home soon after graduating from college (Hook ’em Horns!) to make my own way in the world. But now, six years later, I was right back here in quiet Cedar River, just outside of Austin, the live music capital of the world.

And, with a lot of hard work and a little luck, maybe we could make Sip & Spin the capital of vinyl records, too.

My grandparents used to own a record shop in this very storefront, back in vinyl’s original heyday. My mother and her brother, my uncle Calvin, grew up in this shop. And later, after Mom met our dad not six feet away from where I was standing right now, my sisters and I grew up here, too. By then, we sold cassette tapes and CDs, too, but eventually Napster andiTunes put us out of business.

Then the miracle happened. Millennials discovered vinyl. Between a wave of nostalgia and the desire to experience music without commercials, records were back in a big, big way. And my sisters and I were poised to make the most of it.

When Juni Jessup and her sisters Tansy and Maggie put all their beans in one basket to open Sip & Spin Records, a record-slash-coffee shop in Cedar River, Texas, they knew there could be some scratches on the track, but no one was expecting to find a body deader than disco in the supply closet.

Family is everything to the Jessups, so when their uncle is arrested by Juni’s heartbreaking ex on suspicion of murder, the sisters don’t skip a beat putting Sip & Spin up for bail collateral. But their tune changes abruptly when Uncle Calvin disappears, leaving them in a grind. With their uncle’s freedom and the future of their small business on the line, it’s up to Juni and her sisters to get in the groove and figure out whodunit before the killer’s trail—and the coffee—goes cold.

Music and mocha seem like a blend that should be “Knockin’ On Heaven’s Door,” but caught up in a murder investigation with her family and their life savings on the line, Juni wonders if she might be on the “Highway to Hell” instead. 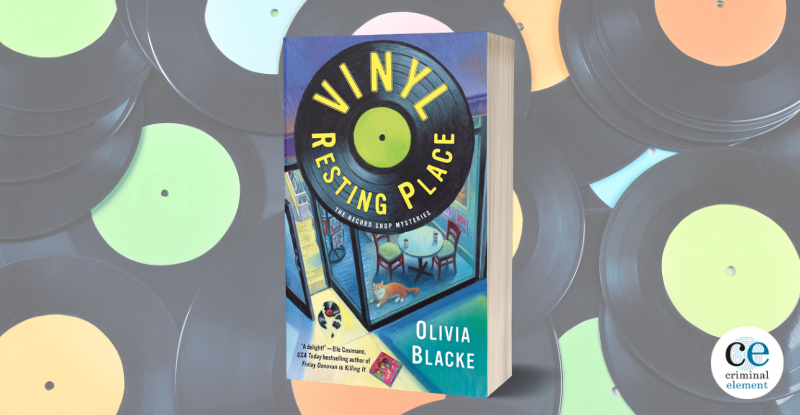 Juni Jessup has given up her entire adult life in Oregon in order to move back to Cedar River, Texas and reopen her family’s record shop with her older sisters, Tansy and Maggie. Sip & Spin Records adds a cafe to the once-shuttered family business, and looks surprisingly well-poised to make a killing even on…