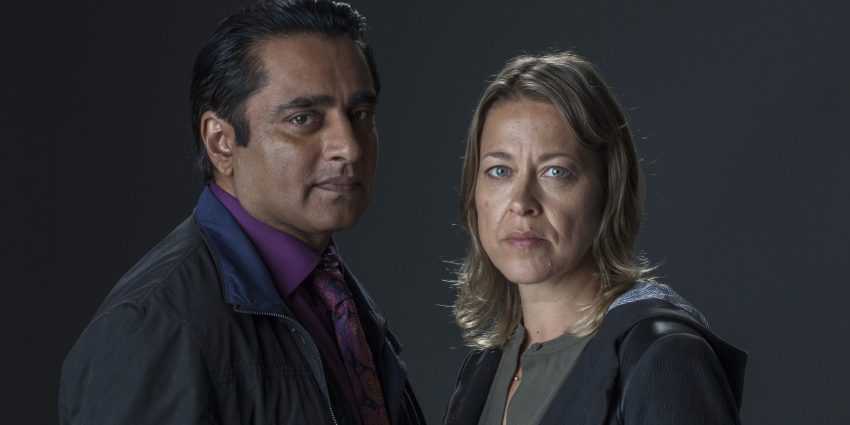 DCI Cassie Stuart (Nicola Walker) has a hunch that at least three of the four suspects in the investigation of David Walker’s murder are acquainted with each other. Yet, she can’t figure out how they’re acquainted. So she plans to bring them all together and watch what happens.

We know it’s a good plan because, at this point in Episode 3 of Unforgotten on Masterpiece Mystery, we know a little more about facts related to David Walker than Cassie does. What we might not have expected, however, is how conspicuously Cassie’s plan doesn’t work. Yet, that’s a result in itself.

Cassie and her colleague, DI Sunny Khan (Sanjeev Bhaskar), have been warned by their superiors to tread carefully. One suspect in the case is a copper herself, DI Tessa Nixon (Lorraine Ashbourne), wife of the deceased at the time of his death. This situation is hardly doing wonders for Tessa’s career. She might have one foot out the door on her way to retirement, but she didn’t expect her departure to include being escorted from the building.

Tessa is angry and frustrated. We don’t know why, precisely; nevertheless, it’s a little hard to feel sorry for her. Certainly, her son Jason (Will Brown) doesn’t have much sympathy. As he storms out the door, she pleads with him not to leave her alone.

“Being on your own is exactly what you need,” he tells her. “Time to think about who you are.”

One could argue, however, that Tessa and the other suspects have spent entirely too much time on their own thinking about who they are. That’s a difficult enough proposition when you’ve led a fairly mundane life—utterly agonizing when your past was full of misery and regret.

No wonder none of the suspects cares to share much about where they were and what they were doing in the late 1980s and early 1990s when David Walker was killed.

One person is talking, though: Ellen Price (Maggie O’Neill from the original U.K. version of Shameless) has come forward as a witness and told Cassie about David Walker’s connection to the reform school where she lived as a teen. If the kids were “friendly” to Walker, they were invited to “gatherings” where they were sexually abused. Ellen identifies the house where the gatherings took place, and she recognizes one of the suspects—possibly more than one—as someone she saw there.

Meanwhile, the suspects are marshaling their defense.

Sara Mahmoud (Badria Timimi) and her husband, Hassan (Adeel Akhtar), comb through the attic for evidence that she was in Rome, as she claimed, when Walker was killed.

Colin Osborne (Mark Bonnar) admits that, at the time of Walker’s death, he was in a psychiatric care facility following a breakdown.

Marion Kelsey (Rosie Cavaliero) was living with her parents and sister in Ireland, which her sister (Holly Aird) confirms.

It’s all a little too tidy for Cassie to accept. And she’s right to be suspicious, especially given the witnesses who turn up in this episode to fill in the gaps and provide context and clarification about the suspects’ past lives. In particular, a revelation about Colin’s past shocks and devastates both us and him.

All told, a lot of pain and a lot of moral ambiguity rise to the surface and must be dealt with in this episode. The question is how. And that’s what Cassie and Sunny must determine before this episode and this case brings Season 2 of creator/writer Chris Lang’s Unforgotten to a close.