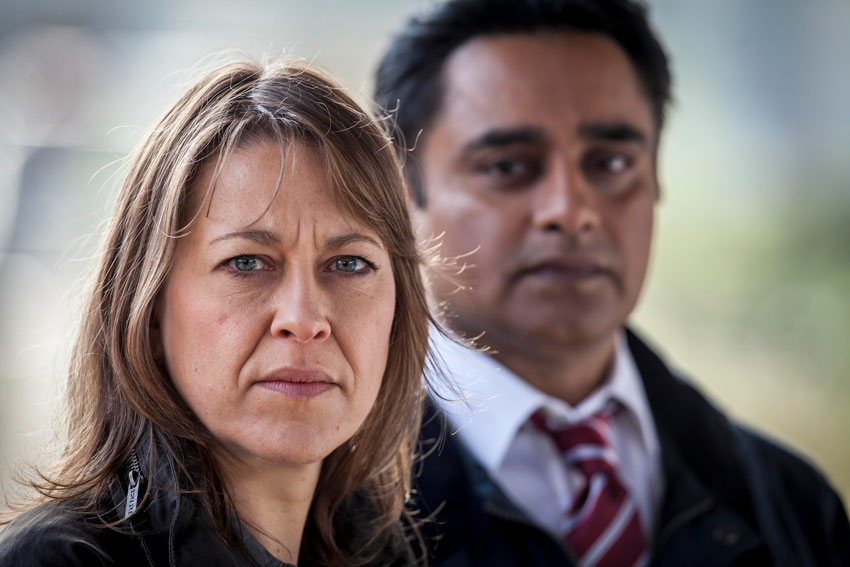 “Is a crime less serious because time has passed? Is a wrong less wrong because it was done 50 years ago? Or 60? Or 70?”

That, in so many words, is the motivation behind Unforgotten, a cold-case police procedural now airing on Masterpiece Mystery.

The premise is nothing new; we’ve seen, read, and heard cold-case stories of all stripes for years.

Even this series isn’t brand-spanking new—it started in the U.K. in 2015. Three seasons exist. We’re scheduled to see two of them back-to-back in the coming weeks.

Nevertheless, Unforgotten has something the others don’t: it stars Nicola Walker, aka the sainted Ruth Evershed from MI-5. To my unequivocally biased way of thinking, Nicola Walker can do no wrong. Here, she’s teamed with Sanjeev Bhaskar, who I also love a lot. So, there’s my full disclosure. I’m going to like this series. And if you enjoy the old-school style of British mystery programming, you’ll probably like it too.

We begin where these stories very often begin: with builders unearthing a skeleton in the course of an ordinary construction project. When buried bones are found where they shouldn’t be found, we know murder can’t be far behind.

Little time is wasted in determining that the bones belonged to a young man who vanished in the 1970s at age 17. DCI Cassie Stuart (Walker) and DI Sunny Khan (Bhaskar) commence an investigation into the death of James Niall “Jimmy” Sullivan, a seemingly good-hearted teenager with a mom who loved him, who went to London and wound up dead and buried under the concrete basement floor of a one-time hostel.

Kicking off the investigation, writer/creator Chris Lang gives us, the audience, a bit of a head start on our detectives. Among the characters we meet before Cassie and Sunny do:

Curtis (Ade Oyefeso): a teen from a poor neighborhood preparing for his GCSE exams.

Ray and Lizzie Wilton (Brian Bovell and Ruth Sheen): the soccer coach and his wife, who have taken an unofficial parental interest in the teen, possibly to compensate for the loss of their own son.

Sir Phillip Cross (Trevor Eve): a steely entrepreneur with a knighthood and a dodgy past.

Eric and Claire Slater (Tom Courtenay and Gemma Jones): an elderly couple. She’s showing signs of dementia. He’s wheelchair-bound and refusing to move from their home into a care facility. (Yes, that’s Endeavour playing on the TV in his living room!)

No spoilers, of course, but the hazy bits of recollection from these characters that flash on the screen from time to time must relate to poor Jimmy Sullivan somehow. Cassie Stuart is determined to connect those dots and to give Jimmy’s mother (Frances Tomelty) some closure. “I want to find who caused a pain that’s very much alive today,” Cassie says. “I want to punish them. 39 years later.”

As ever with these U.K. series, Unforgotten gives us plenty of opportunities to play “there’s the guy from the thing.” In addition to the names mentioned above, the cast includes Tessa Peake-Jones (Mrs. Maguire from Grantchester), David Troughton (a memorable baddie in New Tricks), Peter Egan (Hugh “Shrimpie” MacClare from Downton Abbey), and Cherie Lunghi (just about every mystery series you can name, including two separate turns in Midsomer Murders).