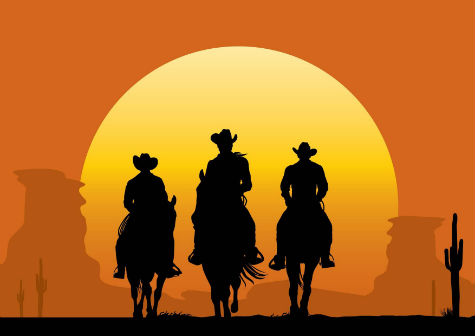 Almost two decades into the century, quality Western films are alive and kicking. Though doubtful the genre will ever bound back to its silver screen “heyday” of the 1940s and ‘50s, those released now are often top-grade fare. Modern Westerns crafted by film makers like Andrew Dominik, the Coen Brothers, and Quentin Tarantino pay a tribute to the legacies that preceded them and give a fresh twist on execution.

The Assassination of Jesse James by the Coward Robert Ford (2007, outlaw Western)

Brad Pitt is a sullen, meditative Jesse James and, in a movie star-making performance, Casey Affleck breathes life into one of the most despised little twerps in American history, Bob Ford—the man who shot James in the back.

Based on the well-researched (and recommended) 1983 novel by Ron Hansen, The Assassination of Jesse James by the Coward Robert Ford (allegedly Pitt stipulated in his contract that the wordy title remain) takes its time unfolding but is never tedious, reveling in rich character nuances. Specifically, why Ford went from admiring the infamous outlaw to murdering him for a full pardon and thirty pieces of silver.

Even today, James remains a controversial figure, some considering him a two-bit thief, while a great many mid-westerners and southerners see him as a Robin Hood who fought back against the unfair Reconstruction Era following the Civil War. Mr. Pitt, who knows a thing or two about celebrity himself, plays a paranoid world-weary James to perfection. Prior to this stage of his career, his good looks often overshadowed his acting, but in Assassination, Mr. Pitt turns in an undeniably stout performance.

2007 Round-up: No Country for Old Men starring Javier Bardem and There Will Be Blood with Daniel Day-Lewis are Academy Award-winning films that are well worth your time.

The title alone is famous, even to non-Western fans—akin to The Good, The Bad, and The Ugly and Lonesome Dove—True Grit has reached iconic status. A huge part of that identifiability stems from the 1969 film starring John Wayne that earned the actor an Academy Award for his performance (the Charles Portis 1968 novel started it all, followed by this movie, a sequel—Rooster Cogburn also starring Wayne, a forgettable TV continuation with Warren Oates, and then the Coen brothers decided to take a whack at it).

What the Coens filmed is essentially what came before, with Jeff Bridges turning in a very Duke performance as the irascible Cogburn. All the supporting actors are uniformly fine, as they were in the original, and could crisscross each other’s pictures with ease. It’s in the Mattie Ross portrayal by Hailee Steinfeld that plumbs new depths to this well-ridden mare, as she hires Sheriff Cogburn to find Tom Chaney (Josh Brolin), who murdered her father.

Though naïve, at first, to the ways of the profession she’s seeking to employ, she’s never-the-less a quick learn, edging Cogburn forward—that the fourteen-year-old actor was able to master so many raw emotions (fear, determination, strength) is something else to behold. She was nominated for an Academy Award for Best Actress in a Supporting Role.

2010 round-up: 6 Guns with Greg Evigan and Barry Van Dyke is an entertaining low-budget, old-timey B offering.

Sam Shepard plays an aged Robert Leroy Parker, aka Butch Cassidy, circa 1927, still living in Bolivia under the alias James Blackthorn. He plans to use the $6,000 he’s earned from the legitimate sale of some horses to return to the United States.

On the way home, a jittery young thief named Eduardo Apodaca (Eduardo Noriega) mistakenly shoots at Blackthorn, scaring off Blackthorn’s horse without him…along with the saddle carrying his life savings. Now penniless, he listens to Apodaca tell of $50,000 he has allegedly stolen and is willing to give half to Blackthorn in exchange for help. With few options left, he reluctantly agrees and soon finds himself back in outlaw mode.

In one scene, the camera lingers on the hardened Butch Cassidy, caught in an abandoned mine with the posse closing in, once again resorting to what he does best—gunning away at his pursuers. Later, he sums up his life in a rare introspective moment: “I've been my own man. Ain't nothing richer than that. Had some good friends too.”

Likable film, though the flashbacks of a young Butch, Sundance Kid, and Etta Place are unnecessary and only end up making me long for Paul Newman, Robert Redford, and Katherine Ross from the 1969 movie.

2011 round-up: Meek’s Cutoff features Michelle Williams (Brokeback Mountain) and is loosely based on a real event.

Accurate history of the times? Hardly; but it touches on past horrors that many African Americans faced in poignant ways most films wouldn’t touch—then offers an emotional release in Django’s diligent retribution.

Loud, bombastic Quentin Tarantino (is he ever anything but gloriously so) revisionist Western that is equally shocking, hilarious, and often in the same scene. Like when Big Daddy (Don Johnson), leading a raid of bigots to torture and hang, begins squabbling over the tiny slits in their white hoods—one Klan member gets upset and leaves because his wife had put a lot of time and effort in preparing those masks dammit! Moments later most of the men are executed to Sam Peckinpah perfection.

Many stand out performances including Walton Goggins, Russ Tamblyn, and Ato Essandoh. Above all, Broomhilda is intensely brought to life by Ms. Washington, who received a much-deserved Image Award for Outstanding Supporting Actress in a Motion Picture.

2012 round-up: For casting alone—Wyatt Earp’s Revenge that has the distinction of Val Kilmer as Earp, having previously played Doc Holliday in Tombstone (1993). Hilary Swank is Mary Bee Cuddy, unmarried and living in 1850s Nebraska territory. Sophisticated, refined, and alone when she offers her services to escort three women (Grace Gummer, Miranda Otto, and Sonja Richter), with varying degrees of mental impairments, back east. Assistance of a reluctant sort comes in the surly form of George Briggs (Tommy Lee Jones), a claim jumper who Cuddy saves from the noose.

Ms. Swank and Mr. Jones play sharply off each other’s performances as they endure unsparingly severe conditions crossing the bleak landscape. At one-point Cuddy finds the desecrated grave of an eleven-year-old girl and reburies the remains, straightening the headstone. Briggs, not wanting to waste daylight, had already gone ahead, and Cuddy nearly gets lost catching up. When she lashes out that he could have set a fire to guide her in to camp, he coldly replies that he had.

Mr. Jones directed The Homesman based on the 1988 Glendon Swarthout (The Shootist) novel. Still, I’m left debating Cuddy’s final decision. The character I had watched from the start obviously had many reasons for what she ultimately does, but there were at least three good reasons to go in a different direction. Regardless, easy to see why The Homesman was selected to compete for the Palme d’Or at the 2014 Cannes Film Festival.

Remember the old Western flicks where white women were captured by the “savages” and the cowboys rode into harm’s way to rescue their “damsels” in distress. Well, in Bone Tomahawk, that storyline is still knocking about Hollywood, but with a major horror mashup rewrite—and thankfully no stereotypical Native American baddies…exactly.

Here, the antagonists are described by The Professor (underutilized Zahn McClarnon) as cannibalistic troglodytes who live a few day’s ride away in the “Valley of the Starving Man.” Sheriff Franklin Hunt (Kurt Russell) and his posse are seemingly up against supernatural evil in speed and sound: one minute an ominous ethereal roar is in the near distance and then bam! a machete in your skull.

These abominations come to Russell’s small town of Bright Hope and kidnap a wounded prisoner, deputy, and a doctor’s assistant Samantha O’Dwyer (Lili Simmons). Hunt’s ragtag help is made up of Samantha’s husband Arthur (Patrick Wilson), who’s leg is in danger of gangrene, an old backup deputy (Richard Jenkins), and Samantha’s bigoted former suitor (Matthew Fox). The last hour of this movie is not for the faint of heart, with unsettling scenes of flesh-eating where humans are treated as finger-licking good.

2015 round-up: The Hateful Eight, directed by Quentin Tarantino, and The Revenant, starring Leonardo DiCaprio in his Oscar winning role.

In Part II of Under Burning Skies, I will discuss 3:10 to Yuma, Slow West, The Missing, and many more 21st century Westerns.

Westerns is a movie genre historically dominated by male characters. Think of these films and what image immediately comes to mind? John Wayne in a ten-gallon hat and some kind of cowboy neckwear? Clint Eastwood smoking a cigarillo while donning a poncho? Maybe Kevin Costner sporting the Marlboro Man look? It’s probably a dude, right?… 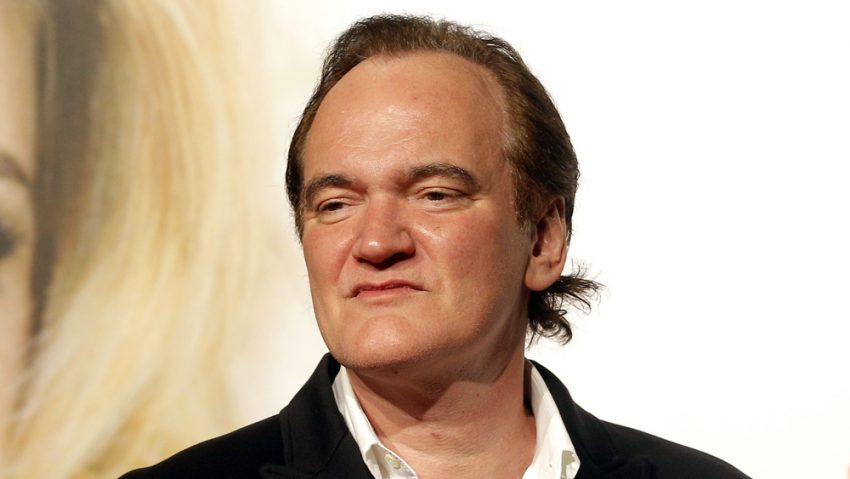 From Reservoir Dogs to The Hateful Eight, Quentin Tarantino has put together hit after hit over an illustrious and storied directorial career. But with so many good films under his belt, we want to know which is your favorite! (function(d,s,id){var js,fjs=d.getElementsByTagName(s)[0];if(d.getElementById(id))return;js=d.createElement(s);js.id=id;js.src='https://embed.playbuzz.com/sdk.js';fjs.parentNode.insertBefore(js,fjs);}(document,'script','playbuzz-sdk'));