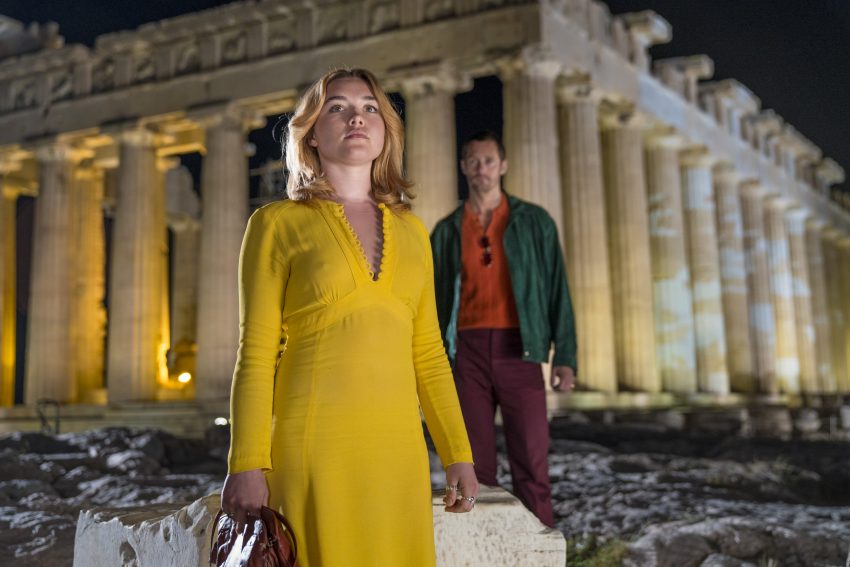 Charmian “Charlie” Ross is an insecure, hard-partying actress, so there should be plenty of people in Hollywood who could handle the part. Yet, there are reasons why this John le Carré character has been such a tricky role to cast. The author himself has stated he based Ross on his half-sister, actress Charlotte Cornwell, whom he also wanted to play the part in the 1984 movie adaptation. Critics also suggest there is quite bit of Vanessa Redgrave in Ross as well. That would be some intimidating baggage, but on the other hand, it is not so hard to follow Diane Keaton’s decidedly mixed reviews as a thirtysomething Americanized Ross in George Roy Hill’s film. This time around, Ross returns to being a Brit in her early twenties in the new mini-series adaptation of The Little Drummer Girl, directed in its entirety by Park Chan-wook, which premieres this Monday on AMC.

Ross is somewhat estranged from her family and deeply steeped in leftist politics. Ironically, that is exactly what Israeli spy-master Martin Kurtz is looking for. She has the right kind of radical chic credentials that could earn the trust of the notorious terrorist, “Khalil.” Why would Ross agree to help Kurtz’s more-shadowy-than-the Mossad counter-terror task force? First and foremost, it is a great part—playing herself.

She is also inspired by her “co-star,” Gadi Becker, who will play Khalil’s brother “Michel” in their training sessions. Becker set the hook seducing her during her company’s tour of Greece, secretly financed by Kurtz, but he definitely left her wanting more.  As Becker tutors her in extremist Palestinian ideology and the details of the terrorist brothers’ biographies, Ross starts to fall in love with Becker—or maybe rather Michel, as played by Becker—or perhaps she really just loves the idea of the man being held incommunicado by Kurtz’s team.

It gets to the point where she has trouble distinguishing the two men, which is just fine by Kurtz. In fact, the Israeli agents so seamlessly fabricate the fictional romance between Ross and Michel, his terrorist comrades soon come calling. At that point, her already conflicted loyalties really become altogether jumbled.

When the director of Oldboy and Lady Vengeance helms all six episodes of a mini-series based on the work of the Tinker Tailor Soldier Spy author, it is a major event. Some might be surprised that the Korean auteur would be interested in a very 1970s-era Middle East thriller, but he was clearly inspired by the way performance and reality blend together in le Carré’s cynical thriller.

Probably the recent gold standard for this sort of on-screen performance gamesmanship was set by Olivier Asayas’s Clouds of Sils Maria. Although it is not a thriller by any stretch, it constantly fools viewers into believing they are watching emotionally flare-ups between the actress and her assistant, when they are really just running uncomfortably resonant lines from her next play. In the case of Park’s Drummer Girl, viewers never really lose their place in the film’s reality, but we totally believe Ross has, which is nearly just as good.

Florence Pugh is totally convincing as the diva-ish Charlie, while Alexander Skarsgård broods like nobody’s business as the profoundly damaged Becker. Their scenes together crackle with weirdly dysfunctional chemistry and palpable sexual tension. However, Michael Shannon upstages everyone as the Machiavellian Kurtz. He is a stone-cold manipulator, but we clearly pick up on a sense of morality guiding his actions, warped though it might be. British mystery fans will also be delighted to see Clare Holman (Dr. Laura Hobson on the long-running Inspector Lewis), reliable as ever, portraying Miss Bach, a British member of Kurtz’s team. Plus, keep an eye peeled for another Hitchcockian walk-on cameo from le Carré.

Arguably, Park’s Drummer is slightly more even-handed in its assessment of Israeli-“Palestinian” conflict than Hill’s film or the source novel, but it still tilts towards the latter. At least in this case, it is pretty easy to tune out the politics and simply enjoy the intrigue. Park definitely channels his inner Hitchcock during Ross’s head-spinning sessions with Becker, in the persona of Michel. He also capitalizes on the exotic locales to craft some of striking visuals. Frankly, it is just hard to pass up an opportunity to see Shannon directed by Park. Recommended for fans of Park and le Carré’s brand of morally ambiguous spy thrillers, the six-part Little Drummer Girl begins tonight (11/19) on AMC.