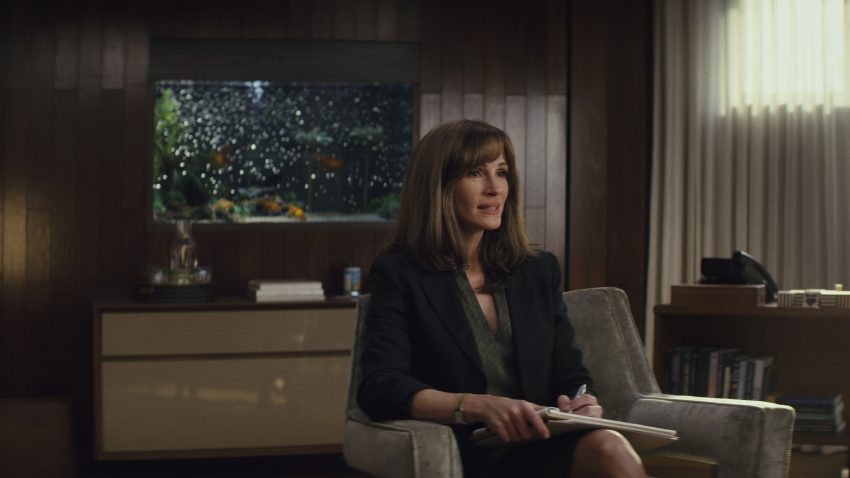 Julia Roberts is here to help. Her mere presence as the lead of a new conspiracy thriller TV series, based on a podcast, premiering in its ten-episode entirety on a streaming site that started its life as a book retailer, shows us how far television has evolved as a medium. It is highly debatable how much genuine assistance counselor Heidi Bergman really provides to the returning soldiers who “voluntarily” check into her mysterious re-integration facility, but it could well be the most intriguing and least glamorous role of Roberts’ career. As listeners of the original podcast well know, Bergman’s corporate masters at the Geist Group have a hidden (and most likely nefarious) agenda in the first season of Homecoming, created and written by Eli Horowitz & Micah Bloomberg, which premieres this Friday (11/2) on Amazon Prime.

You would probably trust Bergman too if she were your counselor. She seems sincere, but also a little mousy. Frankly, her sleazy boss Colin Belfast exploits her mercilessly, but she is still up to her neck in the Homecoming Transitional Support Center’s dirty secret. Just what that is will be revealed over the course of the first season—presumably. Walter Cruz is the latest discharged serviceman who has chosen to ease himself back into civilian life with Homecoming’s help. Like most of the facility’s ostensible clients, Cruz exhibits symptoms of PTSD, but he is still a mostly easy-going chap. In fact, he and Bergman develop an immediate rapport—perhaps based on a mutual attraction.

Unfortunately, Homecoming’s treatment regimen will produce disappointing results, both in Cruz’s specific case and in general. Viewers can quickly see that for themselves during the frequent time shifts four years into the future (that come early and often), where we find Bergman working as a waitress and living back home with her mother. When asked, she seems to have no memories of her time at Homecoming. That rather frustrates Thomas Carrasco, an investigator in the Defense Department Inspector General’s Office, who is following up on a complaint filed by Cruz’s mother. Like the podcast, Homecoming the TV series toggles between these two timelines, providing answers in the past to Carrasco’s questions posed in the future.

Homecoming is indeed adapted from a podcast, but its visual aesthetic is unusually striking, especially in its use of dramatic aspect ratio shifts to differentiate each time period. Viewers will immediately recognize the storyline chronicling Cruz’s time at Homecoming by the immaculately crafted visual compositions, warm lighting, and comparatively wide screen. In contrast, the claustrophobically narrower, smart phone-like framing and the washed-out color palate clearly distinguish the flash-forwards featuring Carrasco. 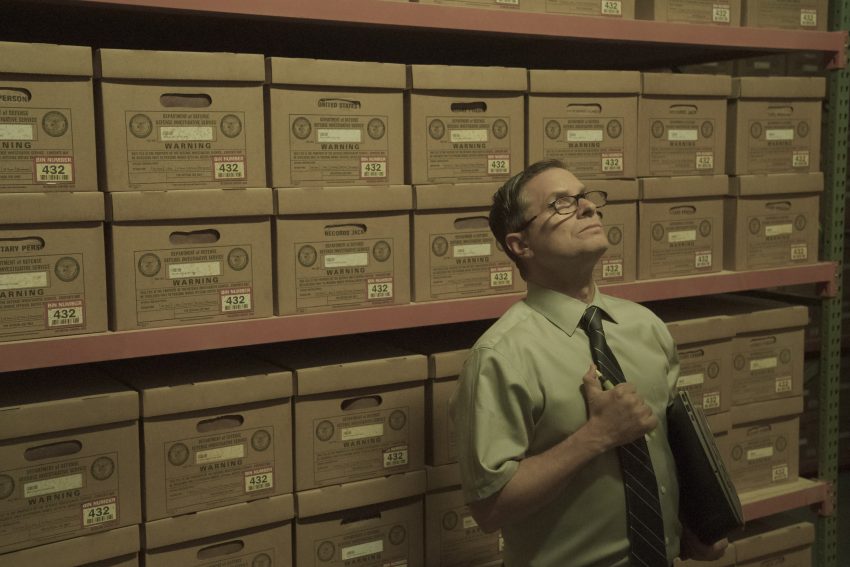 Having a single director’s hand on the helm, Mr. Robot creator Sam Esmail, greatly contributes to the consistency of Homecoming’s look and vibe. The same can be said of Tod Campbell, another Mr. Robot alumnus, who might be the best cinematographer working in series television today, based on his collaborations with Esmail.

For the most part, Horowitz & Bloomberg’s writing is also quite smart, echoing across the temporal shifts in clever and dramatic ways. Their dialogue is often adapted from the podcast nearly verbatim, but if something worked the first time, why change it? However, the whole point of the Homecoming conspiracy (at least that which is partially revealed to viewers) does not seem to justify the considerable resources and expenses the whole subterfuge must require. Of course, there is probably even more to it, which we maybe get hints of during the stinger concluding episode ten (so do not click off during the final closing credits).

Regardless, Roberts does some of the best work of her career as Bergman. She fully digs in and commits, throwing all glitz and vanity out the window. In many ways, Bergman is a deeply flawed character, but Roberts really makes the audience understand her insecurities and guilt. She also really clicks on-screen with Stephan James’s earnest but grounded Cruz.

Both Sissy Spacek and Frankie Shaw are oddly under-utilized as Bergman’s mother and fellow waitress, respectively, but as the verbose Belfast, Bobby Cannavale gives everyone their money’s worth with his gleefully villainous scenery-chewing. However, Shea Whigham quietly steals the show as the fastidiously plodding, achingly dignified Carrasco. DOD bureaucrats, this series is for you—or maybe not.

The fact that Homecoming involves the exploitation of veterans will surely be a sore point for many viewers. That is not an issue Esmail, Horowitz, and Bloomberg can skirt, but at least they treat servicemen characters like Cruz and his even more battle-scarred comrade Shrier with a great deal of sensitivity. Regardless, you have to admire the juggling act Esmail and company pull off. Even if the scheme doesn’t make cost-benefit sense, it is quite intriguing to watch them peel back each layer of the onion. Plus, since each episode clocks in around a half-hour (the longest is 37 minutes), Homecoming is also easily digestible and bingeable. Recommended as some impressively crafted series television (if we can even still use that term anymore), Homecoming premieres this Friday (11/2) on Amazon Prime.