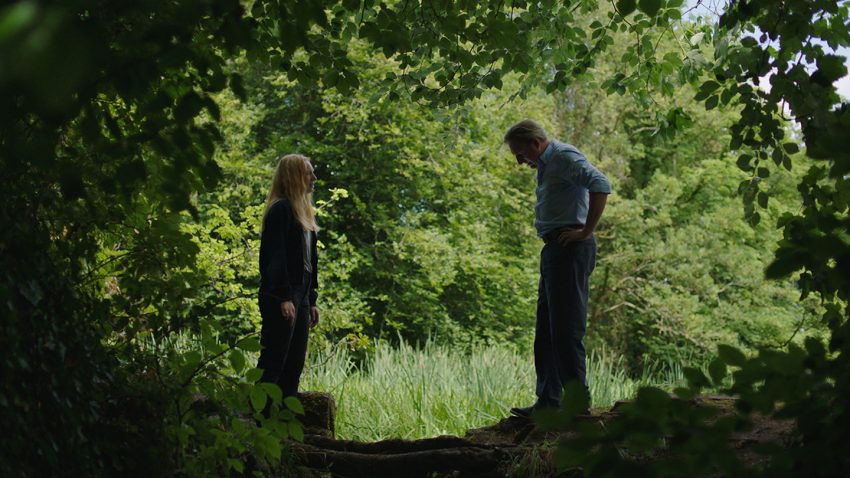 Statistics say murder is most likely to be committed within families. Catherine (Cat) Hogan is convinced her provincial Irish family is a case in point. She suspects her father Jim was responsible for her mother’s supposedly accidental death, but nobody will believe her. For years, her father and siblings openly questioned her stability and undermined her credibility, but she is determined to finally reveal his long-buried secrets in the six-part Blood, created and written by Sophie Petzal, which premieres this Monday on Acorn TV.

Cat’s relationship with her doctor father is essentially broken and she is nearly as estranged from her slacker brother Michael and their married older sister Fiona. Her mother Mary was the glue that held the family together to any extent, but now she is dead. She had been sick for some time, so it was not so shocking when she lost her footing around the backyard pond and cracked her head on a flagstone. At least that is Jim Hogan’s story. However, he keeps changing the details when trying to explain how she was left alone that fateful morning, as the increasingly tense family prepares for the funeral.

It might seem like a rather uncharitable leap to assume her father is a murderer, but we soon learn Cat Hogan had reason to suspect her father was also involved in an earlier premature death. In that case, it was the father of her torch-carrying best pal, Barry Flood. His death was ruled a suicide, but she distinctly remembers a violent altercation between the two men that she was essentially gas-lighted into denying. Her suspicions are further stoked when she discovers her father was carrying on an affair with his office assistant and left a threatening voice message for her mother. To produce the proof she needs, she enlists the reluctant Flood and to a limited extent, her even more reluctant brother.

Blood could be the darkest, moodiest, most devastating mystery series you will ever binge.

Blood has been likened to the original Broadchurch, which is an apt comparison with respect to overwhelming angst they both share. Petzal’s writing is unusually sharp, but often hard to watch. In scene after scene, we just want to slap the characters and force them to finally tell each other the truth. Instead, we see how every lie compounds and metastasizes, cleaving the Hogans further apart. Yet, we keenly understand the motivation for every deception, prevarication, and problematic decision. That is why it is such a potent tragedy.

Adrian Dunbar has worked prolifically in film and television since the 1980s (notably including The Crying Game), but Jim Hogan just might be his career-defining role. He can be chillingly sinister, but also profoundly sad and painfully tormented. Thanks to him, Hogan cannot be dismissed a monster, but he is maybe capable of monstrous things. Dunbar conveys every aspect of his multifaceted, contradictory character with authority and surprising humanity.

Carolina Main’s performance as Cat Hogan is nearly as complex and darkly hued. She clearly and compellingly establishes her damaged nature as well as her defiant willfulness. It also just hurts to watch all aching dignity and neurotic schlubbiness Cillian O’Gairbhi brings to each scene as poor Flood.

Blood could be the darkest, moodiest, most devastating mystery series you will ever binge. The directorial duties were evenly split between Lisa Mulcahy (episodes 1-3) and Hannah Quinn (4-6), who maintain a remarkably consistent (and consistently morose) tone. Some of Blood’s secrets might seem obvious in retrospect, but the point is to illustrate their corrosive effect on the Hogan family, which it does with visceral intensity. It is terrific television, but it is hard to imagine re-watching it after the initial viewing.

Highly recommended for viewers who do not have a history of clinical depression, Blood premieres this Monday (12/17) on Acorn TV.