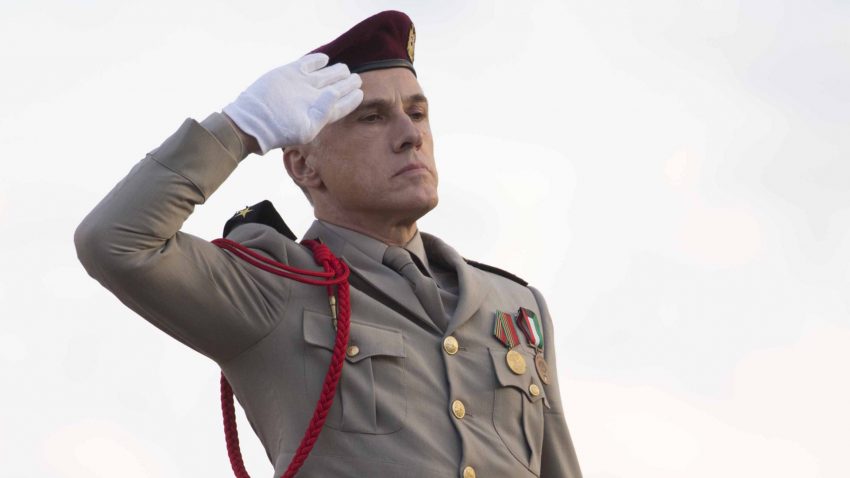 In real life, they were named Albrecht Muth and Viola Drath, but the film calls them Ulrich Mott and Elsa Brecht, which maybe does him a small favor. According to the New York Times magazine, their marriage was “Georgetown’s Worst,” but that seems slightly unfair. They had things in common, like their German roots and a fierce determination to rise in the politically connected high society of our nation’s capital. However, there was a bit of an age discrepancy. He was her junior by forty-four years. Regardless, nobody would call their marriage a success, because of its untimely end. Christoph Waltz portrays Mott, the socially awkward social striver, in his directorial debut, Georgetown, which premiered during the 2019 Tribeca Film Festival.

Alas, Madame Brecht tripped descending the stairs of her fashionable Georgetown townhouse while her husband was taking his regular constitutional. At least, that was Mott’s first version of events. The police and viewers will start to doubt it, when Waltz flashes back to the significant episodes of their marriage. It was unconventional, but it maybe sort of worked for a while, because of his solicitousness and her enraptured faith in his abilities. At times, she beams at him like a proud mother. Yes, it is as creepy as it sounds.

Waltz (in his various capacities) tries to play it coy as to whether or not Mott/Muth is a murderer; it is pretty clear he is some kind of con artist, but his goal is to acquire policy-making influence rather than dirty money. Sometimes, he maybe even has something constructive to bring to the table. However, viewers should still remember and judge accordingly the luminaries he recruited as board members and advisers for his pretentious sounding Eminent Persons Group, including former Defense Sec. Robert McNamara, future Defense Sec. Chuck Hagel, and George Soros.

Frankly, it is easy to see what attracted Waltz to this stranger-than-fiction tale of self-reinvention, but he maintains an oddly flat, noncommittal tone throughout the picture. This premise could have made a wonderfully sly Ealing comedy with Alec Guinness playing multiple roles, but of course that wasn’t an option. In the film that we have, we can see Waltz working himself to exhaustion. It is an awfully busy, almost manic performance, but he never really taps into the potential humor of Mott’s schemes, like his wandering eye-patch, which seems to come and go and even change sides at random.

In contrast, Vanessa Redgrave glides through the film, perfectly balancing sophistication and naiveté as Brecht. There is no question she could pass for a grand dame of the Georgetown dinner party circuit. However, Annette Bening is completely wasted in the one-note role of Brecht’s suspicious grown daughter, Amanda.

This film really ought to be better than it is, but at least it is superior to Tim Burton’s disappointing Big Eyes, in which Waltz played another eccentric trying to raise his station through an extended con. It is amazing to see how far (and how deep) Mott goes, but the on-screen drama and comedy are all very forced. Georgetown does not live up to its promise, but the big name cast should guarantee a theatrical release, after it premiered at this year’s Tribeca.